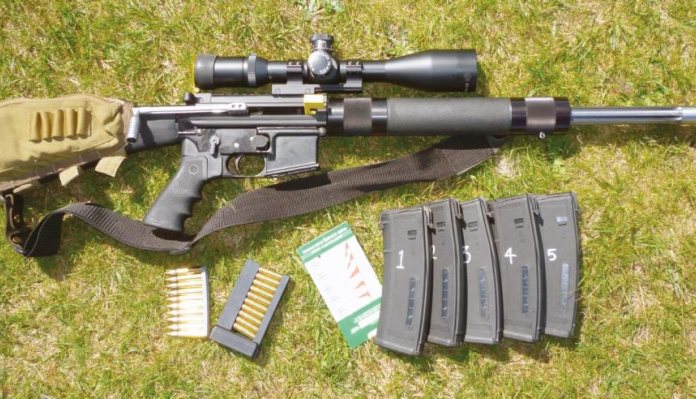 Even though I started out shooting CSR (Civilian Service Rifl e) using my old Sabre Defence, straight-pull Congo FAL in 7.62 mm NATO, I usually take part with my Southern Gun Company (SGC) Speedmaster. The reason? Well, it’s just so much easier to use, as the FAL lacks primary extraction, due to its tipping bolt and the AR15-based SGC offering uses a rotating, multi-lugged bolt and it’s much more forgiving. That and the fact that it’s in 5.56x45mm NATO or to the laymen 223 Remington, a much milder calibre to shoot. The smaller round is also cheaper to buy and to reload, so a full season of competition is quite a bit cheaper.

To look at, I guess my Speedmaster looks pretty much how it started life, which is nearly two decades ago now! I can’t believe I’ve had it so long, but time has fl own by since I fi rst got my mitts on it back in 2001. I’d been lucky enough to shoot one of the fi rst dedicated SGC straight pulls with the Editor and it must have been love at fi rst sight (me with the rifl e, not Mr Moore!) as I soon placed an order for one.

Most of my shooting back then was using a bipod and a relatively high magnification scope, so a heavy, fluted 1” (25mm) diameter DPMS match barrel was specified and it shot amazing groups with pretty much everything it was fed. As Mr Moore had a similar rifl e back then, he’d perfected a load using 69 grain Sierra Match Kings and 24.5 grains of Hodgdon Varget. I guess that I should have worked up an individual load for my gun. But at the end of the day, Pete’s tried and tested load worked just as well in my rifle, so that’s what I used. I was soon churning out my own ammo on a Dillon RL550B and I once shot a ragged, one-hole 10-shot group at 100 yards with it, so I wasn’t going to change anything.

As we are talking about straight-pull AR15s, which by design are a hybrid of mating UK-legal, AR15 components with a manual operating system, when compared to something like a purpose-built Blaser R8, the subject of primary extraction must be considered. If the cartridge used generates too much pressure, bolt operation can be hard if not downright impossible, as you struggle to un-stick the case from the chamber. This will obviously disturb your shooting position and general ability. Reloads can cure this to a greater degree, as can trying small amounts of factory ammo first, to see what you gun likes.

I also loaded 55-grain Hornady V-Max bullets for foxing, and these also gave superb, ½ MOA groups. My barrel is obviously getting on now and I hate to think how many rounds I’ve fired through it! To make the rifle a little more usable for standing and kneeling shots, I had my local gunsmith turn down the front two thirds its profile; to a now much slimmer .63” (16mm) and I’ve enjoyed losing 1Lb 2oz off the front end. The distinctive ‘pepper pot’ muzzle brake is still there though as it’s really effective, if you consider you need a brake on a 223!

To keep within CSR’s Service Optic’ class rules, I had to install heavier springs in my JP Enterprises match trigger, to increase the pull to meet the minimum weight of 4.5Lb.

It’s actually quite a bit heavier than the minimum but I’m used to it now, so I’ll probably leave it as it is.

In the early 2000s, the Hogue free float forend was a very popular choice, but, 4-way, quad rails soon became fashionable; however, I couldn’t stand them and stuck with my tubular version. Having four Picatinny rails available for bipods, hand stops, forward grips and torches etc. may be very useful but they are like a cheese grater to hold! You can of course fit rubber rail covers, but the grip then ends up being even fatter than ever and covering up all that ‘rail estate’ seemed to defeat the object. So, my unit has seen fashions come and go. All I’ve done to it is drill a hole in the 9 O’clock position for a QD sling stud. I rather like the look of the more modern style alloy hand guards with multiple M-lock slots for adding accessories, instead of Picatinny rails. They only have one on the top, so are far slimmer than the old cheese graters.

The pistol grip was originally a Hogue over-moulded rubber unit, to match the forend, but I fitted a G27 model quite a few years ago but I’ve also tried a few others. The butt I chose was the standard GI/A2 issue version, but I modified ed it slightly by fitting an adjustable pad normally seen on airguns; I’ve fitted a few to my springers and PCPs, so it was an easy thing to do. However, a second-hand factory-made unit came up, so that replaced my original fitment; it allows the pad to be moved up and down, in and out, as well as angled and I’ve got it adjusted perfectly for my style of shooting. Magpul make some really nice, fully-adjustable options and they’re seen on a lot of CSR rifles down at Bisley.

My rifle was originally fitted with a ‘dog leg’ charging handle that dropped the actual knob back a couple of inches but was later replaced by the more traditional style found on most straight pull ARs these days and widely imitated. However, I was later sent the adjustable version, complete with a couple of different lengths of stainless-steel bar that the bolt knob attaches to. I ended up using the 12.5cm version, intended for the 7.62mm ARs that SGC sell, as it drops the knob a little further to the rear than the 10cm option, which suits me fine. The safety catch was originally standard, but this also got changed for an ambidextrous unit, as I wanted to use my trigger finger to change from SAFE to FIRE; I just find it easier for some reason. It may look a little odd, as the usual, left-handed lever was filed down by the previous (lefty) as it interfered with his trigger finger. I also changed the mag catch for a larger, dropped back version, again as it’s just a little easier to use.

My magazine well was always a bit tight for some reason, so I had to remove a fraction from some 20 and 30 round alloy mags and synthetic Magpul P-mags were tight also. Salvation came in the shape of some E-mags, as they are very slightly narrower and drop free without modification.

The scope originally fitted was a 30mm tubed 2.5-10 X 56 model from Deben (made by Hakko in Japan) and it served me well for most needs, but added too much weight, especially as I could only use it on 4.5 in ‘Service Optic’ class. I therefore tried various, lower magnification options and I love the Trijicon AccuPower 1-4 X 24 with a 30mm, aircraft-grade, one-piece alloy tube, a second focal plane, Duplex reticle and low profile, capped adjusters with ¼ MOA clicks. I’ve used it extensively in competition and it has never let me down. It is quite expensive, however.

Another great scope, at a very good price, is the Hawke Frontier 30 1-6 X 24; once again a 30mm monotube but this time with a 6x optical system. Low power is excellent for short range work and the glass-etched reticle has red illumination; it also has 1/10 MRAD exposed and locking turrets to prevent loss of zero. The design is pretty bomb-proof and the centre dot and circle, when illuminated, can be used like a red dot on 1x magnification.

I had a rather unfortunate incident in the Century range car park a couple of years ago, when I was carrying my Speedmaster in an un-zipped gunbag. I swapped hands but only grabbed one of the two handles and the rifle fell onto the gravel! It seemed to happen in slow-motion and there was nothing I could do to stop the scope taking the full force of the impact! I decided not to shoot in the afternoon, as I had no idea if the zero had been affected; better safe than sorry. I needn’t have worried though, as when I checked the zero a few weeks later, nothing had altered; well done Hawke!

Well, this old gun is still going strong, but I’m on the lookout for a new barrel, as my groups at long range are getting a little too large and what’s the point of making life difficult for myself in competition? It’s bad enough having to contend with a series of timed, positional shots and often gusting wind, without adding to the potential for poor scores. I’ll probably go for a 16 or 18 inch barrel of a fairly modest profile, with some form of muzzle brake, as they really work. My Speedmaster really has stood the test of time, despite being a little long in the tooth and Southern Gun Company are to be recommended if you’re in the market for a straight pull AR.