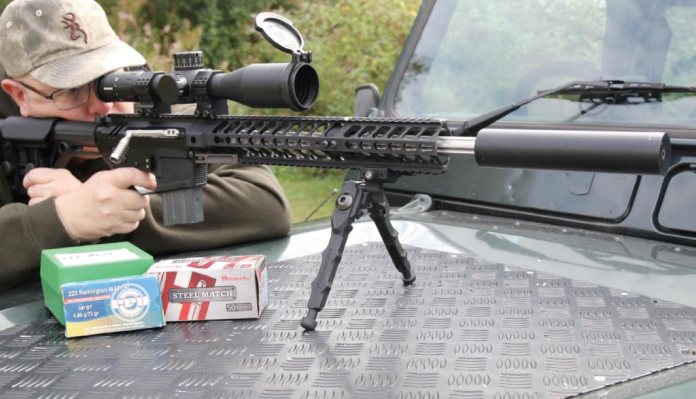 The Southern Gun Company (SGC) owned and run by Bob Clark’s real claim to fame, as far as I’m concerned, is his Speedmaster, AR15 hybrid design. I say hybrid, as unlike the conventional, straightpull; Blaser R8 for example, which is built from the off as a sporting rifle, post-selfloading rifle (SLR) 1988 ban ARs use a standard lower, combined with an upper with a barrel that was not drilled for a gas port or a gas tube. If built like this, then they became manually-operated (straight-pull) Section 1 firearms.

Back then, as a keen Practical Rifle (PR) shooter, I mourned the loss of all my self-loaders, none more so than my beloved AR15A2. Some changed to bolt-actions for PR, but they never quite hit the spot for me, until one day I saw my first mann-opp AR15. It was an Olympic Arms that had been factory-built for our market; sans gas port and tube. Operation was by the standard, rear-mounted T-handle, not the best thing, as guns of this type can be critical on primary extraction – unsticking the fired case from the chamber. Close but no cigar, even with an extended lever!

Later, I saw an advert for SGC, showing a very different looking AR15 and met up with Bob. An accomplished gunsmith and engineer, he re-thought the straight-pull concept and came up with a better mouse trap. Called the Speedmaster it was notable for three things: a heavy (1” diameter) fluted, free-float 20” barrel, heavier upper receiver complete with integral Picatinny base and ambidextrous side-cocking. Compared to my old 15A2, it was big and heavy, but boy could it shoot. At Bisley with a 24” version I was pulling ¼” groups at 200 yards off a bipod with 69-grain match ammo; I was convinced!

The Speedmaster has undergone many changes since it first appeared in the late 1990s, with improvements to controls and build options. I bought one ASAP and appreciated its ability but found it too heavy for PR and since then have owned both rifles and carbines, in various build specs. But what really makes it is its ambidextrous ability, which also means its left handfriendly too (RACKNLOAD take note).

The upper receiver walls are thicker, as the right hand one needs to be slotted to allow the bolt its full run, as the cocking handle is attached to the carrier. On the left, is a fold-down handle for left hand use; off a bipod, this is particularly effective for a right hander, as you maintain your firing/control grip and cycle left handed. Today, the design has been pretty much perfected, although you can go on SGC’s ‘gun builder’ programme and select your components to build the AR of your dreams.

A few years ago, Bob offered his Lever Release (LR) carbines and rifles, which were the nearest thing you were going to get to a true self-loading rifle, again, without stepping outside the legal/technical boundaries of Section 1 firearms. I’ve tested both and although appreciating what they offer and their innovation, I still prefer the original, straight-pulls for what I do. A moot point, as it looks like HMG is going to ban them, even though they do not conform to the legal definition of a self-loading mechanism. I say this, as the LRs certainly eclipsed the Speedmaster design and I thought it about time to take a look at a new version of this the most iconic, British-made mann-opp AR.

This example is not quite standard, as Bob has included several extra features, some of which do aid shootability, others maybe not so much. But a look at the website shows many options, for example the quick release rail free-float forend PLUS (15.5”) is £275 and all very clever, whereas the Hogue rubber, over-moulded forend is £92.40, simpler yes but that may suit you better and money saved could be put to a top class trigger. Equally so, the basic, Forged Mil-spec lower receiver from 7075-T6 alloy at £273.77 shaves around £100 off the Mk 6 unit. But like I always say, it’s your call!

Barrels are bought-in, and, apart from ‘branded’ components, everything else is made in house at SGC to very high standards and finishes. Suffice to say, a Speedmaster is going to last you a long time and give good service and in that is worth it!

As standard, all rifles come with the basic T-handle, which on a side cocker is near redundant! If you’ve never used a straightpull AR, you’re in for a treat. The right-side cocker is long enough to negate cases bouncing back off your hand and, as the handle’s lever is angle-adjustable, it can be set up to suit. The left side handle folds out when required and, as I said before, for bipod work is excellent, as the right hand maintains weapon hold and shooting position.

The ambi safety is a practical feature on any AR, as is the big button mag release, I don’t think the ambi button offers that much extra and Bob has left the bolt release lever standard (if it ain’t broke don’t fix it). The Jard trigger is a definite improvement over the standard mil-spec unit; fitted unless something else is requested. It shows a lightly curved, yet wide blade, and offers a smooth 4lb release with a tad of take up. But AR triggers are plentiful and SGC offers a lot on their web site.

The Magpul MIAD pistol grip is one of the best I have ever used and offers different depth rear sections and alternate front plates too; plus, fills in the top of the back strap for an improved hand/trigger finger position. The Luth AR fixed butt is a cost-effective alternative to something like the Magpul PRS at around half the price; I have one on my rifle and it offers adjustable length of pull (LOP) and comb height.

The QD forend is a bit Marmite for me, with top and bottom, full length Picatinny rails and K-Mod side slots for accessories it’s a clever design. Bob originally built it for his LR rifles, as it needs to come off to access the gas system for cleaning. It’s also modular, as can be seen with this 15” example, as the first 5” are removable. It locks with a plunger and lever clamp and is rigid in use. The 3-port muzzle brake is magnificently over the top, on a huge ¾ x 16 thread, which looks like something a plumber might use! But if it turns your crank, then crack on, as it certainly does the business!

Whatever you feel about AR15s, they are built to shoot and capable of superior accuracy and a lot of owners are not even of a Practical nature; instead, just appreciate their abilities and in this, this heavier built example excels. This is not a light rifle, at around 9lbs bare-backed, and is more a prone or supported option, which is fine. I added a Barton GunWorks Accurate Hunter (plus) reflex moddy; nice piece of kit and efficient too, along with an Accu-Tac bipod and a Minox ZP5 3-15x50 tactical scope in Tier One medium-height 34mm rings. I chose three ammo types; Prvi Partizan (PPU) 75-grain BTHP Match and Hornady Steel Match also a 75 BTHP Match bullet and finally my standard 223 Rem reload; a Sierra 69-grain Tipped Match King (TMK) over 24.3-grains of Ramshot

Out of interest, I shot some GECO 55-grain Target, just to see what this lighter weight would do in this fast, 1-8” twist tube and it printed around an inch. It was averaging 3038.5fps with an ES of 29fps, so not a bad light load for an AR! As I already said, primary extraction is always a concern, certainly with heavier bullets putting up internal pressures and, in the past, I’ve had issues. The Steel Match was my biggest concern as those lacquered steel cases can be a bugger, but not so with this rifle! Fast or slow operation, they slid out easily, group size went to 1” at 2629.5fps Avg and 49fps ES. The PPU was identical in reliability but were going into sub-.75” at an impressive 2758fps Avg and 22fps ES. And the reload; as usual a steady 0.5” and slick as you like with an ES of 19fps and an Avg of 2877.5fps. Suffice to say, it shoots and works reliably and it’s down to you what you use it for!