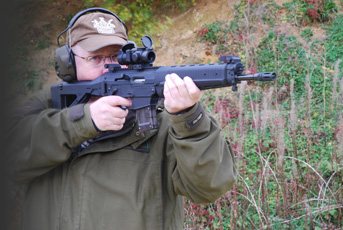 I first saw the SIG 522 at IWA 2009 and was surprised and impressed that the Germans would make a 22 rimfire, military-look-a-like. Well they don’t! As this neat little take on the 223 Rem SIG 556 Classic is designed and manufactured by SIG SAUER USA. As you might know I’m a big AR15 fan and in all its guises and especially the shorty (M4) version; the generic design be it rimfire (semi-auto) or centrefire (man-opp) has become popular with British shooters. For me the 522 makes a refreshing change, but I wonder how it will fare with we AR-loving Brits? Rifles are imported and distributed by Garlands Ltd, who also handles Sauer.

As an ex collector of fullbore, self-loading military rifles I really like the feel and look of the SIG, as it’s certainly different from the generic AR15. Control-wise it borrows from the M16 design a little. It arrives in a plastic case, with cable lock, 1x25-round Black Dog magazine and butt extension piece. For transit the cocking handle is stored in the pistol grip trap (take note) and there are no iron sights included. There are a number of accessories – iron sights, red dots, scopes, sling and gun bag, but they are expensive, speaking to Jamie Garland indicated they can be brought in to order…

The build goes for an extruded, aluminium alloy receiver, with integral, Picatinny rail and a polymer lower with a side-folding butt. Furniture is black synthetic with a rounded/tapered forend and full pistol grip, both ribbed for grip.

The butt is telescopic and gives three lengths of pull (LOP) via a large, catch in the underside – 11.25, 12.25 and 13.25”; this is with the standard pad. The extension adds a further inch! I needed all the LOP I could get and it felt fine in the shoulder, however, it will pretty much suit anyone big or small. A sling loop and eye is moulded into the butt cut-out and there’s a QD sling stud at the rear left of the receiver. To stow the stock there’s a big, D-shaped button at the rear left of the lower receiver and a lug (rear right) on the forend that it locks into.

Copying the 556 Classic externally is the dummy gas block/forend cap, which also acts as the front sight base. It mounts a sling eye and the gas regulator is now a plastic plug for a small, over-barrel storage compartment. The tube is a medium weight, 16.6” unit with an M16, A1-type flash hider and threaded 1/2x28” UNEF, so no problem fitting a can.

What immediately struck me were the ambidextrous controls and the integral, manual, hold-open catch on the left of the receiver, which is a real boon. The safety is a large lever positioned above the pistol grip (left and right) that flips from 3 to 4 o’clock to go from SAFE to FIRE. Likewise the magazine release is forward of the trigger guard on the right, so just a matter of pushing it with your trigger finger to pop the empty, which is mirrored on the left of the action. OK; the layout is very M16 - but if it ain’t broke don’t fix it!

If you are used to the AR15 T-handle at the rear of the action, the 522’s comes as a pleasant surprise. Located on the right of the receiver it reciprocates with the bolt and there’s a lot to get hold of. It also doubles as a forward assist for the occasional recalcitrant round as you can give it a good push with the heel of your palm. So far I was really liking what I was seeing!

The SIG strips like an AR15 with front and rear, push-out body pins to separate the receiver halves. Though all you need to do is pop the rear one and the action hinges open. The bolt is pulled back until the cocking handle is positioned in its rear cut-out where it’s removed, the bolt then slides out. Taking off the forend shows the barrel is held in by a collar and looks easy enough to remove. The SIG website says there’s also an optional heavy/varmint tube which replaces it; it looks to be around 20”, plus the Tactical version (standard barrel) with a 4-way Picatinny-railed forend. Jamie confirmed that when SIG starts shipping these items will be available.

The bolt assembly is a steel bar with a single, large extractor claw and a captured recoil spring/rod. There’s not a lot to go wrong and even less places for the crud to build up; the ejector hook protrudes from the left side of the breach face.

The 522 does not come with iron sights and, though not essential, I feel rifles of this type look better with them. On the plus side it also allows you to shoot without glass; so no bad thing either. I contacted Samson Manufacturing Corporation who make sights and they kindly sent me their QuickFlip set for the SIG. This consists of the FAS-A2 rear with L-flip aperture and windage drum (M16-style), up front the FFS-SIG with elevation-adjustable post. Nice is the fact they are spring-loaded and fold flat when not needed, but a push of the button on the left deploys them; cool…

For the test I used these along with a Leupold 1x14 Prismatic, which is more a mini scope with proper reticule and though just x1 offers a far better aim point than a red dot. Also an S&B 1.5-6x42 Zenith. This sort of spec spans both short range Action-type use at x1.5 and bunny bashing out to 100-yards at x6. I dug out a diverse range of ammo, from match-types to hi-velocity from RWS, American Eagle, Winchester, Lapua, SK, Remington, Eley and CBC/MagTech to name a few. Research indicated the 522 is reliable, so I wanted to see what it could shoot across the board…

Starting with Winchester subs I bombed-up the clip with 10-rounds and proceeded to shoot, then repeating the process with every type I had. From the 40-grain HP subs up to Winchester 37.5-grain Lasers the 520 shot the lot, feed, extraction and ejection were very good!

In all I put about 1000-rounds of mixed 22 LR through the 522. Testing showed it was good for about 500-shots before it needed cleaning. At around 400 I got one stove pipe (case not fully ejected and trapped by the bolt) then a few light strikes. The latter proved to be a build-up of crud on the bolt and breech faces, which set it back too much for the firing pin to make full contact with the case rim. Here I stopped to clean the action, trigger mech and the magazine and dug out the build-up of debris under the feed lips. That is one of the good aspects of the Black Dog mags as you can not only remove the follower and spring but also take the box apart too, as it uses 6x Allen screws to hold it together.

With that done the SIG was back to full and reliable operation. The only other stoppages (three in all) were all traced to the ammo, which happens with all 22 semi-autos and is unavoidable. Given the diverse and sometimes filthy ammo I fed it I reckon a 450-500 round reliability figure is pretty good!

So what about accuracy? The trigger is pleasing with none of the heavy, military feel of some basic AR15s. It offers a 2-stage pull with a short but firm take-up followed by a longish/soft break at around 4 - 5lbs with no surprises. Best results generally came from the low to medium velocity fodder with average group sizes of ¾” @ 50 and 1-2” at 100-yards. If I had to pick four brands that performed the best it would have to be Winchester Expert and Lapua Magazine 22 in standard and SK High Velocity HP and Winchester Lasers in the hi-speed bracket!

The controls on the 522 are practical, though I would say the port side safety lever is a bit short and you need to shift your firing hand grip to operate it with your thumb. I found it quicker and easier to use the starboard paddle instead! The manual bolt hold-open is a boon; certainly on load/unload drills. The handle has a lot to get hold of and in the case of a short bolt (not fully closed) it allows you to shut it easily. The Black Dog mag offers an extended follower which automatically catches the bolt after the last round. The clips do however rattle a bit in the mag well, certainly when compared to an AR, but they feed well.

Jamie told me that he is expecting the 10 and 25 box mags and a few 50-round drums in about five to eight weeks’ time. To be honest, you will want some spares as you don’t buy a gun like the 522 and shoot it slow fire/precision… The 10-rounder is about the size of the AR15 20-shot unit and is well suited for hunting as it’s far handier being shorter with adequate capacity for that roll.

The butt folds up on to the right of the action and in this condition the rifle can still fire, which is doubtless where the ambi controls come into play as the starboard side safety and mag catch are covered. The locking system works well, however the butt needs to be at full extension so it can engage. Firing in this manner is a waste of time, but the ability to shorten the package for storage or carriage is useful.

Overall this is an excellent rifle that shoots and works well and gives perhaps a slightly more practical and visual alternative to the current crop of AR15 rimfires. Don’t get me wrong as I still love the AR and already own a Walther Colt M16 A2, but have already bought the test gun; say no more!

My thanks to Jamie Garland (Garlands Ltd), Scott Therrien and David Grimshaw (SIG SAUER USA), Cathy Samson (Samson Manufacturing Corporation) and Neil Parnham (Suffolk Rifle Co, 01473 730035, 07886 415303) for their help and cooperation. Neil is getting a good reputation for 22 semis of this type and retailing the SIGs so if you want to look at one give him a bell.