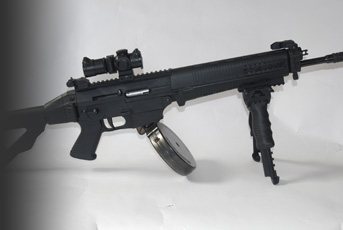 The 522 is a rimfire version of their centrefire 556 assault rifle and only made by SIG/SAUER USA. The build goes for a heavy alloy upper with Picatinny rail and polymer lower with ambidextrous, AR-like controls. The pistol grip and forend are synthetic, as is the length-adjustable, side-folding butt, which comes with an extended recoil pad to increase LOP if desired. The barrel is 16” with a flash hider threaded ½ x 28” UNEF. Even though there is provision for them there are no iron sights included, which are extra.

As standard the gun comes with a 25-round, Black Dog magazine, though a 10-shot box and 50-round drum are also available too. Cocking is by a large handle on the right that reciprocates with the action. The BD mags offer a last round, automatic hold open facility via the follower that rises to block the bolt. There is a manual hold open on the left of the receiver.

The 522 comes apart like an M16 with push pins holding the receiver halves together and the pre-packaged bolt is similar to the M&P15-22 making it easy to clean. In use it runs reliably though the butt is a bit wobbly. SIG offer a set of three, short Picatinny rails that bolt onto the forend. There’s also the SWAT version that replaces the synthetic furniture with a Samson, aluminium, ventilated, 4-way forend.

For: Well built and a bit different
Against: Wobbly butt, no iron sights included
Verdict: A functional alternative to the rimfire M4 clones