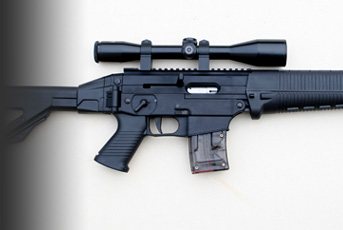 There is no denying the up surge of military style rifles and their popularity amongst shooters here in Britain. Straight pull centre-fires have their place but it is the .22 semi-auto rimfire market that has seen an explosion of makes and models recently. This is one area of shooting that usually holds no interest for me, which might sound a bit odd judging by the number of rifles I test each year, but hopefully it will give me an unbiased view of these sporting target arms.

Most semi automatic rimfires of this genre take the look directly from the M16 rifle platform but I thing that look has been done to death now, so it’s refreshing to see another style of “military” looking rimfire rifle.

The Sig 552 came to light in 2009 and takes its look from its larger brother in .223 and for a Military gun actually looks rather good. As you would expect build quality is very good and comes with a good array of accessories and the price of sub £750 is bang on the money so let’s see how it fares.

The stock is what catches the eye immediately and its format is full sized so the Sig is no miniature version of its big brother. Black/grey synthetic polymer is the choice for the stock material and it has the benefit of lightness yet still retaining a good degree of robustness. The stock is ‘hollow’ but tough, being resistant to scratches and standing up to abuse quite well, at least the two young Potts boys failed to break it!

The forend has a solid rounded feel which is comfortable and has ribbed sections along its length with characteristic rectangular vents to the top and bottom of the forend. There are options to attach Picattiny rails to either side and base, useful for attaching laser sights or torches.

The butt too is equally ergonomic with a telescopic structure to accommodate many shooters sizes with the added bonus of being a folding design. As is, it adjusts from 11 inches to 13.45 inches and there is a further inch extension if necessary.  The stock can also be quickly folded flat to the receiver on the right side by depressing a large push button insert to the left rear of the receiver so the butt swings shut and is retained by a locating lug just in front of the magazine.

With the stock sorted the Sig will win or fail on its reliability and accuracy from the receiver and barrel components. The barrel is a chrome moly construction and of medium sporter profile measuring 16.5 inches long. Internally it has six groove rifling with a right hand twist of 1 turn in 16 inches which is the norm for .22 Long rifle rimfire, so accuracy should be no concern unless you shoot the heavy Aquila SSS 60 grain projectiles.

The muzzle is threaded with a ½ inch x 28 pitch UNEF thread for a sound moderator so not your usual UNF size and the Sig comes with a Flash hider come muzzle brake as standard. This was the first problem area as the brake is glued on at the factory and try as I might I could not remove it to fit a sound moderator. You will need to gently heat up the threads to break the join, so as this was a test gun I resisted the urge… shame.

The action is a light alloy and has an ambidextrous approach to control lay out. That is the manual safety catch is mimicked on both sides. The safety is on with the catch lever on “S” so the SIG cannot be fired and when moved to the “F” position the rifle is live and able to fire. Simple but reliable. The mag release is a push button to either side, and although a bit stiff I prefer that to a sloppy mag release that dumps a mag when you least expect it!

The bolt is operated initially with a cocking handle that comes packaged in a storage hole in the end of the pistol grip so this needs to be fitted first. It also is handy for clearing jams and pushing the bolt forward on stubborn chambered rounds.

The pistol grip is well angled and gives a really good hold and the top of the receiver has a full length Picatinny rail for scopes red dot or laser sights and open sights.

Like most rifles of this ilk the Sig is very fast to field strip with a push out pin literally halving the action. The barrel pivots up with the top receiver and leaves the lower trigger array and magazine well exposed. From here the bolt slides out and trigger can be disassembled and cleaned, which is always handy on a semi automatic rimfire that will inevitably get gummed up with lead, wax lubricant and unburnt powder.

Ejection is managed by a large single claw extractor and ejection via an insitu protrusion from the inner receiver wall as the bolt reciprocates.

Trigger pull is surprisingly quite good! Not what you might expect from a military style rifle. It is typically a two stage affair with a short take up and then smooth heavyish long pull of 5.25 lbs weight. It’s very controlled and deliberate in operation but as I said, actually quite good. That’s all well and good mechanically but how does it actually shoot.

I was determined to use as many types of rimfire fodder as possible. This meant subsonics to high velocity ammo was tested at 30 yards and then at 75 yards, realistic ranges for rimfire use.

The ballistics tell only part of the story here. As can be seen there are no surprises in velocity and energy figures but accuracy does vary a tad and functionality is another matter.

Accuracy for a semi automatic is very good all told. Five shot groups were used and best accuracy went to the Eley Subs, always a good contender with 0.35 inch 30 yard groups and no larger than 0.75 inch at 75 yards. At 100 yards you are looking at 1.5 inch groups with the proper hold.  The other subs from a sporting prospective, were the Lapua subs with 0.45 inch groups but I did have a few problems with reliable feeding. From the ten shot mag I used you would always get one jam with the spent case not ejecting properly.
The RWS although the slowest rounds actually functioned ok with a jam once every three full magazines. Winchester subs also worked well but 75 yard groups were 1.0 inch so a tad large.

No doubt there are those that want to use higher velocity ammunition and you may expect the higher velocity ammo to function or cycle the bolt more reliably but I still had some jams. Best of the bunch were the Lapua HV loads with a hollow point lead projectile shooting 0.45 inch groups at 30 yard groups and still holding 0.85 inches at 75 yards. Most reliable were the Remington Viper loads with only a couple of jams and good 0.55 inch groups.

Despite my non interest in military looking rimfires the Sig has a certain charm I have to admit and I was very pleasantly surprised at the good accuracy levels and overall reliability. As with all rifles you need to feed it a diet it likes and that is half the fun with shooting, in finding the best load for functionality and accuracy - well at least for me it is. Although aimed at the gallery shooters no doubt I would have reservations in taking it out rabbiting because of the comments and looks it would get, but I would have no problems with the accuracy potential at all, the rabbits do not care what the gun looks like do they!
I did try the 50 round drum magazine as well and it was very reliable although took an age to load but proved spectacular sport at plinking at water filled plastic bottles. I was a cool Dad for five minutes!

Well priced , unusual and a different look, and accurate with the right bullet, the Sig 552 will prove a big hit I am sure - as my two boys attested to, as they left a big hole in my rimfire store testing all the ammo!