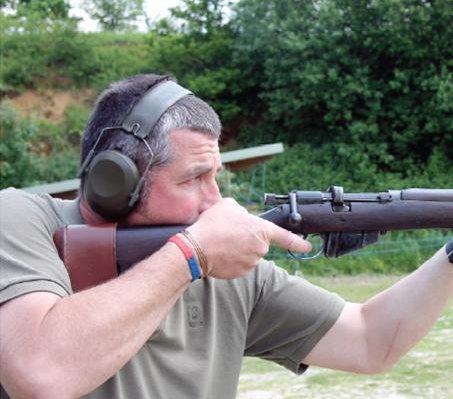 It occurred to me the other day that we have done little in the magazine on this subject for some time. Last year I tested a Yugoslavian copy of the Mauser K98. These iron sight only, old war horses elicit mixed emotions from shooters. Some see them as little more than relics of a bygone age that have no values in today’s scene! Others find them an exciting and very different way to go.

I really started rifle shooting when I joined the Army Cadets (Croydon Para) in 1966. I was never sure why we were called that, as we wore the Pegasus and the badge but not the cherry beret and never went near a parachute, let alone an aircraft! However, I couldn’t care less, as it gave me the chance to shoot a Lee Enfield No 4 Mk II in .303; wow. Though now having lots of scoped rifles, I still have a soft spot for iron sighters and have a few of my own and practice regularly.

I was up at Henry Krank & Co recently who are probably the premier supplier of ex-military bolt-actions and as I discovered, they have racks of them in a diverse choice of makes and calibres. Also, as the distributor of Prvi Partizan (PPU) ammo, offer cost effective military ball loads, well suited to this equipment.

Though I cut my teeth on the No 4 Lee, I actually prefer the earlier Short Magazine Lee Enfield (SMLE) as I think it looks nicer and shoots smoother. In terms of build and features, there’s little in it, with a massive, single locking lug on the right of the action, well positioned and practical safety catch and turned down bolt handle. Along with a cocking piece at the rear, detachable 10-round magazine and charger loading through the action too. Main changes are the walnut stock, bull-nosed forend and tangent rear sight of the SMLE, over the beech furniture and ladder/aperture rear sight of the No 4. Rifles are chambered in 303 British, using the standard, 174-grain, FMJ boat tailed, spitzer bullet with PPU making a good copy of this spec that goes out at an average of 2383 fps with a pleasing extreme velocity spread of just 27 fps!

The SMLE is a singular and distinctive looking design, certainly when compared to the mainly Mauser 98-inspired European and American bolt-actions of the period. Kranks supplied me with a Mk III*, which does not feature the earlier magazine cut-off plate of the Mk III. I told them I wanted a shooter and the gun came with a good bore and dark woodwork. This is something you have to live with, as ex military rifles can be much used and little shot, sold in job lots and often stored badly with the furniture suffering the brunt of the abuse. If you have a mind you could ‘make-off’ the stock and get it back to good condition.

The stock is in two pieces, with the separate butt screwing to the rear of the action. Sorting length of pull (LOP) is easy, as different lengths were made, so the unit armourer could swap them to suit. The butt plate is brass and features a ‘trap’ for storing the cleaning kit. The forend is in three pieces with the full-length lower sweeping around the receiver and ending at the muzzle in a separate, steel nose piece. This is configured to act as a bayonet lug, foresight and muzzle protector and unlike the 98K and No 4, no part of the barrel protrudes; sensible for a fighting rifle! Up above are two separate handguard sections, which are held at the front and rear and in the middle by a band. There’s a set of steel wings to protect the rear sight block too.

The butt is best described as a ‘scanttype’, with a vestigial pistol grip and no comb to speak of. My example came up very short on LOP and as a solution I fitted one of Krank’s universal, slip-on recoil pads. It adds about an inch to the LOP, which certainly helped and does a good job of reducing the kick too.

Controls are well laid out with a nicely turned down bolt handle, that offers good leverage. The action cocks on closing, so making the opening movement easier. The rolling lever safety is positioned rear/left of the receiver and pushes forward to FIRE and reverses for SAFE; when compared to the cumbersome flag-type of the Mauser, it’s a massive improvement! When set to SAFE, the action is also locked. There’s a large cocking piece at the rear of the bolt, which gives half and full cock positions and can be operated manually if required. The bolt head is replaceable, so allowing for head space adjustment to individual rifles, by fitting ones of different lengths; again an armourer’s task.

Where the Enfield scores in military circles is its 10-round capacity and the fact it has a detachable magazine too. Saying that, rifles originally were issued with two magazines but were mainly intended to be clip-loaded through the top of the receiver by 5-round stripper clips, with the spare mag being just that if the other was lost or damaged.

Stripper clips are still plentiful, though mainly used, but magazines are less prolific and in most cases a good shooter with clips can run the rifle at 20-30 aimed shots per minute. The NRA in their classic Trafalgar meeting even have a stage Called the ‘Mad Minute’ that tries to duplicate this ability, which is mainly aimed at the Enfield shooter.

The down side of the calibre is that it’s rimmed, so ammunition has to be stacked one up one down in the clip in sequence. You can go 3-up, 2-down or the reverse, but if you don’t then you can end up with a rim sitting behind another, which causes feed problems. The only other rimmed service cartridge of the day; the Russian 7.62x54 R (rimmed) used in their Moisin Nagant bolt-action had an interrupter, that held the rounds below the top one down, to stop this problem.

You can of course load the magazine by hand, allowing you to position the ammo correctly. However the mag has vestigial feed lips so is not that secure in keeping its payload if it’s bouncing around in a pouch or pocket. The release catch is inside the trigger guard and pulls up to disengage. There’s a clip guide integral to the rear receiver bridge; the full clip is positioned and you place your hand around the action with your thumb pushing the rounds down into the magazine, and then as you remove the hand, flip the clip out with the thumb. With practice it’s a fast and efficient system, given the clips are in good condition!

Sights are old school, with a large, tangent/U-notch at the rear, which is marked from 200 to an ambitious 2000 yards! Back then, rifles were also used in long-range volley fire, which could prove surprisingly effective. Up front is a slim blade in a transverse dovetail gives windage adjustment as it can be moved left and right. However, to do this you must remove the steel nosepiece first. Though not small, the SMLE is a handy rifle with its 25.2” barrel it’s 44” long and weighs 8.8 lbs.

My example showed the fore sight well over to the right, meaning it was shooting well left by about 1 ft at 100 yards. As I did not have any means of adjusting it, I simply noted fall of shot and compensated accordingly. The PPU shot on average 4-5” groups, which is good for irons. I also had a 6”, steel reactive gong target and it was easy to hit it every time, even when standing. Felt recoil is a bit hard but not punishing, the addition of the butt pad smoothed things up no end and also helped the cramped feel offered by this one’s short LOP.

The action cycled easily, though I needed to adjust the ejector screws, as the empties were not really kicking out. This is easy, as you can screw it in or out to suit. Overall, a good example of a classic rifle and eminently shootable and a steal at the price. I will be looking at other military bolt-guns for the future, so if you relish a challenge, then consider some of these old soldiers, as they offer a unique appeal! Prices will vary a little given the condition of individual rifles, currently Kranks is showing an SMLE at £525.