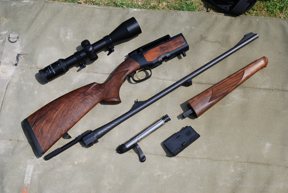 I have to admit to liking Steyr Mannlicher (SM) rifles, as I owned one of their Scout models for nearly five years and I reckon their ProHunter is good too. So the announcement they were introducing a switch barrel (The Luxus) got me interested. Historically the original company - Mannlicher Schoenauer offered a take-down rifle in their Model 1905 and this concept has been combined with the elegant SM Luxus of 1977. Frankly this is a smart move as it brings the company on line with the similar designs.

If you are not aware the principle of a switch barrel is simple, as they are built so the barrel and bolt system can be easily removed and the chassis re-fitted with another calibre set. This offers both plus and minus points, given the design and build quality offered:

• The ability to switch calibres means you have one, familiar gun that can do whatever you ask of it
• As the rifle comes apart easily it can be carried in a smaller package, which is a boon for overseas travel
• Normally most switch barrel systems use dedicated (and expensive) QD scope mounts
• There’s normally a question mark from those new to the concept about the ability to return to zero after being re-assembled
• The initial outlay is expensive, but once you have one then it’s generally the cost of a new barrel, magazine and bolt should you wish another calibre option
• Depending on calibre you might not necessarily need a new bolt and magazine

I own a Mauser M 03 switch barrel and am very happy with it, I am also familiar with the other systems – Blaser R93 and Sauer 202. The R93 uses the same, twin screw, barrel retention of the M 03, the 202 has a split clamp receiver design. Of the two the Blaser/Mauser is faster and easier than the Sauer, but a mandatory/dedicated scope mount is required in both cases. The 202 uses a standard 1” Weaver-type base so is cheaper to fit a scope to. However, this gun requires a complete new bolt when changing calibre whereas the R93/M 03 only needs a new head.

The Luxus duly arrived and proved to be familiar in some areas though new in others. First up it feels and looks different when compared to the ProHunter. It uses a modified version of their SBS69 bolt system though retains it’s three position, tang-mounted roller safety.

Styling is traditional and is what I would term as; classic European in that it is used standing or sitting. The receiver is black, anodised, aluminium alloy and is similar to the Sauer 202 as it's the spine of the rifle with the furniture fitting to it from either end. On that point the timber is good, oil-finished walnut, though front and back did not colour match! The butt is your classic Hog’s back design with a high, rounded comb and subtle cheek piece. The forend is noticeably tapered with a Schnable tip. The wood effect is carried on with the sides of the action showing inlet panels. Fixed sling swivels are fitted under the barrel and butt and at the rear is a rubber recoil pad.

The 23.5” barrel shows the trademark, spiral, hammer-forged finish on it’s light and tapered profile. Iron sights are fitted with a height-adjustable blade up front and a windage-only U-notch at the rear. What I instantly liked was the fact the Luxus comes with the scope mounting rail attached to the top of the barrel, so there’s no need to take off the optics when changing calibres. This then offers 100% repeatability and reliability of optical mounting.

There are two options on the mount. My example came with a 1” Weaver/Picatinny-type base, so you can fit industry standard rings, which will work out cheaper than having to shell out for mandatory mounts. However, if that is what you want you can nominate for a QD, swing-off base.

Now on to the most important bit; calibre change! The barrel requires you undo one, captive, Allan-headed screw at the front of the mag well, which allows the forend to come off too. Proceed as follows:

Inside you will see what I would term as a recoil lug that the underside of the chamber section engages with. Reassembly is the reverse, but you must ensure to get the chamber lug exactly engaged with its slot in the receiver.

Three things struck me about the build. First the 6-lug bolt locks directly into the chamber extension, which allows for the lightweight alloy receiver, without loss of strength. Second, the forend is surprisingly rigid as it locates by two long lugs that fit into the forward section of the receiver. I reckon it would easily stand fitting a bipod, however, I don’t think SM had that in mind when they designed the Luxus! Third the scope base does not physically attach to the receiver top in any way; in fact this area is cut out so there’s no possible influence on the mounting system.

The bolt body and locking head is one item that must be exchanged. A tool is provide for the job, proceed as follows:

All that is now required to change calibre is to fit the new bolt head/outer tube (if required) and re-assemble. The job is easy and well explained in the instruction manual. You could also argue that the Luxus’s complete head/outer tube offers better concentricity. The design uses the familiar Steyr, butter knife handle, with a cocked action indicator pin in the shroud and the heavy outer body shows slots that will stop debris binding the action should it ever get on the bolt.

If you are familiar with the ProHunter the Luxus’s controls are near identical. The single column, 3-shot magazine is held by twin latches built into the side of the well; you just push them in and pull out the clip. The 3-position roller safety offers the following - red dot (FIRE), back one a white dot appears (SAFE with bolt operation) fully back a grey lug flicks up (SAFE action locked). This is also the position for bolt removal, though you have to lift the bolt handle up prior to moving to this mode. I did find that the roller has deeper slots on its circumference, which makes it easier and more precise to use, with no over running the position that happened a lot with my Scout.

The trigger is a single set unit and adjustable via an Allan screw in the blade. Factory-set the pull tripped at a crisp 2-3 lbs, which I found very nice, but if you are used to the heavier pulls of US rifles then take some time to get used to it. Should you want to up the weight then turn the screw anti-clockwise, a note here: if you turn it too far the action will not cock.

The set function offers a very light break! With the action cocked push the blade forward and it will set into this new position. From the box the weight required near no finger pressure and I would say; do not use it for hunting, as all it needs is a moment’s brain fade and you will have a negligent discharge… You have been warned! The Luxus is also available in a true left hand version at no extra cost, which is good.

My example was chambered in 308 Winchester with a Kahles 2.5-10x50 Helia CSX with their automaticlight, illuminated reticule function on top in a set of Leupold, 30mm, QD rings. Like all good European rifles it came with a test target shot at 100 metres.

The test target showed a concentric 0.666” group, shot using 10.7-gram (168-grain) Hornady hollow point load. This is a weight I favour in a 308 Win as it really works. I dug out some RWS Geco 170-grain SP, which was pretty near and just managed to beat the factory size with a cluster of 0.624”. OK it won’t do it all day as that slim tube heats up quickly, but it’s pretty good for a lightweight stalking rifle. On that point the Luxus is a bugger to shoot prone, as the butt geometry is not set up for this position. Like I said this is a traditional walk ‘n’ stalk/sit ‘n’ shoot stock design and it didn’t suit someone like me who is used to the more across the board, American build that allows multi-positional use.

My primary concern with any switch barrel system was how it handled calibre change. Once zeroed I fired a 3-shot group, removed/replaced the barrel and stripped/reassembled the bolt, then fired three more. I purposely left the scope in position, as there’s no need to remove it, so why bother, which is one less variable to worry about.

Though the butter knife bolt handle was easy to get on to I found it a bit firm to lift as it cocked the action. The bolt with its big, round body ran smooth and slick and the plunger-type ejector worked 100%. I found the magazine catches a bit small and smooth, which was a problem exacerbated by wearing gloves.

However, and without doubt, Steyr has succeeded in offering an effective switch barrel system, which is unique to them. Calibre change is quick and easy and the ability to leave the scope in place is most practical, with the SBS 69 bolt and safety system being as good as ever. What I particularly like is the fact a left hand version is the same price. This - the initial version - without doubt has been firmly aimed at the European market and here in the UK it should appeal to the more traditional stalker. Speaking to Steyr on the subject indicated that other models and options will be coming, though they do currently have a lightweight Mountain rifle. As ever the Luxus is available in a wide choice of calibres that includes magnums, so get on to their website to see what’s on offer.

If you’re looking for a decent switch barrel design; Steyr Mannlicher is now a serious consideration. My thanks to Gary Lambourne (Sportsman Gun Centre), Gundacar Wurmbrand (Steyr Mannlicher) and Niki Kraus (Kahles) for their help and support.