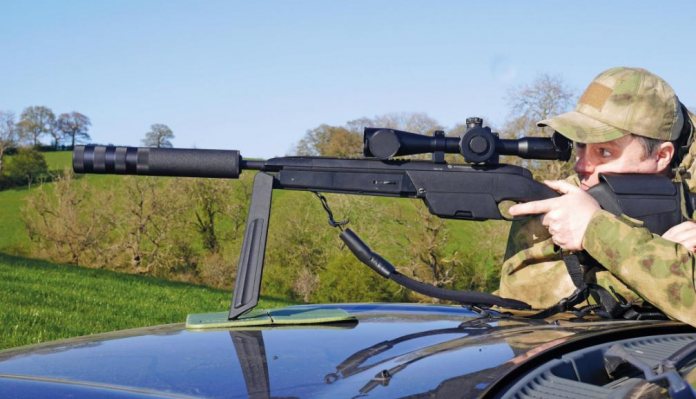 Some guns radiate the creative energy of a design team committed to reaching further and achieving more. The Steyr Scout is that kind of gun. In fact, there’s so much to look at and to like here that I’d better get started!

US gun guru Col. Jeff Cooper (1920-2006) laid down some parameters for what he called a ‘scout rifle’: max length 1m; max weight 3kg; chambered for a widelyavailable short-action .30-calibre cartridge; fed from a box magazine; fitted with aperture iron sights; with the provision for mounting an intermediateeye- relief (IER) scope ahead of the receiver.

Collaboration In the 1990s, Steyr Mannlicher hooked up with Cooper to produce a scout rifle as an ‘off-the-shelf’ factory item. Basing the Scout on their already-innovative Safe- Bolt System (SBS) platform, Steyr’s designers scrupulously ticked all of Cooper’s boxes and then added some neat extra features of their own: an integral bipod, a second magazine handily stored in the butt-stock, adjustable length of pull and aftermarket options including higher-capacity (10-round) magazines as well as a height-adjustable comb and butt-pad.

Cooper’s weight restriction called for a light barrel, so Steyr went for a 19” tube chambered for the .308 cartridge (for which 19” is plenty), gave it a ‘pencil’ or ‘buggy-whip’ profile, and then cut deep flutes into it. The original finish was stainless, but today you can opt for Steyr’s proprietary Mannox coating, which resists sweat and blood as well as abrasions and moisture. Current UK rifles also come threaded ½” UNF.

Trimming weight further, the Scout’s receiver was made from aluminium alloy, which was an innovative choice for a turn-bolt rifle in the 1990s. As on the AR15 and Blaser R93, pressure was contained by having the bolt directly lock into a barrel extension. Head-spacing is via a clever collet system hidden away within the hand-guard, so removing the barrel requires specialised tools. Integral to the receiver is a low-profile Picatinny/Weaver optics rail that continues along the upper handguard (also made from aluminium).

The Scout belongs to a family of SBSequipped Steyr turn-bolt rifles. System features include a recessed bolt-face and a safety collar around the bolt/barrel interface that work together to protect the shooter in the event of a ruptured case. The bolt-body has grooves to cut through debris that might seize the bolt and channel it clear of the action. The shroud has a visible/tactile cocking indicator and stripping is a quick-n-easy twist-lock/ unlock affair. The handle is threaded, so if you don’t like the standard round ball you can easily replace it with a teardrop knob.

The Scout is available with a choice of a (standard) 2-stage or (optional) set trigger. Pull weight on the former is factory-set at around 3.5lb and the break is clean, consistent and predictable. This is just as well since no adjustment instructions are provided and the screws are lacquered over. The SBS series is noted for its 3-position ‘wheel’ safety. From the forward ‘FIRE’ position (red dot), roll back one stop to the ‘LOAD/UNLOAD’ position (white dot) to lock the sear but not the bolt, then roll back one more stop to the ‘SAFE’ position. This locks everything and pops up a button that has to be depressed before the wheel will move again. In this position, pushing the handle down against the stock cams the striker out of alignment, creating a ‘double-safe’ condition in which the rifle can be safely carried with a round chambered. The safety is also used when removing the bolt: simply lift the bolt handle, then roll the wheel back to ‘safe’ to free it from the receiver.

As befitted his vintage, Cooper envisaged a blind box magazine fed via stripper clips. Moving with the times, Steyr chose a detachable box, whose followers, bodies, floor-plates and integral mag catches are neatly moulded from tough black polymer. The double-stack design makes loading easy and feeding smooth. Magazines can be engaged in two positions. The first secures the mag but leaves the rounds shy of the bolt, acting like a magazine cut-off to enable single feeding over a reserve. To engage the second position and feed from the mag, simply push it fully home.

The Scout comes with two magazines, the second of which is neatly stored in a compartment under the butt, where a spring pops it smartly into your hand when you release it. Standard versions hold 5-rounds.

The optional high-capacity kit comprises an extended mag well that clips to the stock and accepts 10-round magazines. These include witness holes that show the odd-number round-count on one side and even numbers on the other.

The stock is also made from tough polymer and is available in green or brown as well as standard black. The surface has a matte texture but could usefully be more tactile, especially at the hand. Better is the front end, where a ridged rubberised insert on each side of the forend gives a good hold. The butt pad is solid rubber, which is firm but grippy. It clips into one of a pair of removable spacers that can be detached using the shaft of a screwdriver (or similar). Additional spacers are available separately if required. Triangular panels in the sides of the butt can be swapped out to accept a cartridge holder (L/H) or to mount the optional heightadjustable comb (R/H). This involves removing the butt plate but is otherwise easy to do. Ahead of the magazine compartment is a small storage space with a clip-in cover.

Pressing a latch underneath the forend releases the sides to act as the legs of the integrated bipod. The ridges that added grip to the former now lend rigidity to the latter. The legs have wear-resistant metal inserts in the tips and click audibly into place when fully deployed. The pivot at the front lets you eliminate cant, and lateral play allows some panning. No height adjustment is provided and ‘loading’ the bipod heavily will collapse it. Not perfect, certainly, but better than nothing at a pinch, and always useful as a rifle stand. Ahead of the bipod latch is a flush-fit UIT rail. Stud and Picatinny adapters are readily available and inexpensive, so fitting a conventional bipod is easily done.

Five flush-fit swivel sockets are provided: on both sides of the rifle (at the toe of the stock and forward of the mag well) and underneath (ahead of the UIT rail). These take proprietary swivel loops with a T-shaped foot that lock into the sprung slots in the sockets with a press-and-turn action. The middle sockets are there because Cooper liked a 3-point sling design called the ‘Ching Sling’. Even with a regular sling, the QD system is excellent.

Back-up polymer ‘iron’ sights (BUIS) are integrated into the rear receiver bridge and upper hand-guard. The rear sight has to be lifted with a fingernail (or bullet tip) and features a wide ‘ghost-ring’ aperture for fast acquisition, plus it’s adjustable for elevation. The front sight is spring-loaded and activated by a sliding catch. It has a bold square blade highlighted (sometimes) with a white line and is adjustable for windage against a reference scale. Adjustments require a small screwdriver.

Cooper’s BUIS/IER sighting package poses some problems when mounting modern optics. Firstly, the upper hand-guard (required for an IER optic, redundant otherwise, but a fixture nonetheless) creates a flat-top profile that obliges you to choose a conventional scope with a small objective lens or source extra-high mounts. The latter option will lift your head out of contact with a stock originally designed for compatibility with the BUIS sights, though this issue is readily resolved by fitting the adjustable comb (available separately). Having only one rail slot fore and aft of the receiver port also limits the choice of scopes, whilst the choice of mounts is constrained by the narrowness of the slots, whose dimensions are more 1990s ‘Weaver’ than 2020s Picatinny and crying out for modernisation.

Feeding is smooth, the bolt throw is slick and the trigger is clean. If you use the irons or a little low-mounted scope, the stock ergonomics work pretty well, though (as noted) I’d like more grip at the wrist. Raise the sightline, however, and the rifle starts feeling snappy and becomes less pleasant as well as less accurate to shoot. Happily, adding the optional adjustable comb restores the harmony, plus an adjustable butt pad improves things further. With the rifle properly set up, and from a field rest, 3-shot groups with 110 to 178-grain loads ranged from ½ to 1 ½ inches. After shooting, the bore cleaned easily, as hammer-forged barrels usually do.

Light, compact and rugged, plus with the capacity for safe loaded-carry, the Scout is a handy stalking rifle. Sans-moderator and equipped with the high-capacity kit plus a red dot or low-power variable scope, its fast, slick bolt and 20-round payload have serious driven-hunt potential. However you configure it, the Steyr Scout is a truly versatile and practical rifle – in short, precisely what it was designed to be!