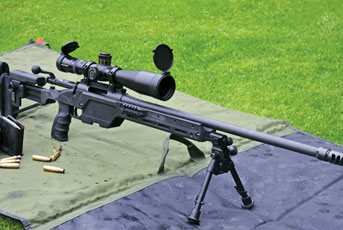 My trip to IWA this year showed just how many Police/Military Style rifles are made by European ManufaCturerS. I have tested a few but seem to have missed out on one of the biGgest names in the bOok, Steyr Mannlicher from Austria. Upon my return, I was loaned the SSG08 (S2C) model to review and the more I shot it, the more I learned.

This rifle has every hallmark of its breed - medium profile, heavy barrel chambered in .308 Win, muzzle brake, detachable 10-round magazine and a folding, aluminium chassis stock tick all the boxes from the outset. The barrel runs parallel from 20mm in diameter at the muzzle brake until a short taper up to the chamber reinforce at 29mm. The external helical swirl along its 23.6” length shows its signature hammer- forged manufacture and is one of the few aesthetic niceties on the otherwise industrial looking build.

The muzzle brake vents laterally via 6 ports and is delicate in appearance at just 25mm diameter. A flat black coating covers all metallic components and the action beds snugly into the chassis via 2 Allen bolts. With a separate Picatinny rail (zero incline) bolted on top, mounting a scope is straightforward. A minimal ejection port is the only interruption to the cylindrical action profile tapering gently into the bolt shroud, showing a cocked action indicator at the rear. The bolt shows two opposing pairs of locking lugs giving a bolt lift of approximately 70°, the simple, push-feed face contains a plunger ejector and sprung claw extractor.

Underneath the gun, an AR15 pistol grip assembly pairs up to a generous trigger guard containing the familiar two-stage unit regularly found in this type of gun. Although adjustable from its factory set 3.5lb, the instruction book warns against meddling with it and all screws are thread locked in place to avoid temptation. A large, twin column, 10-round magazine is concealed within a generous mag well incorporated into the chassis and this polymer unit is very easy to load. Being double-stacked, rounds can be simply pressed in from the top unlike the single stack AICS-style that loads from the front.

The unit is generously sized for the 308 cartridge and has to be one of the quietest, smoothest systems I have ever used! Also pleasant was the fact a single round could be dropped into the ejection port and the bolt would feed it into the chamber with no hassle, always good when you don’t want to mag feed. Twin catches either side of the mag’s base allowed assured fitting and removal from the gun.

Although familiar to Steyr owners, the safety catch shown here is a little unusual. A rotary wheel sits almost flush with the tang and has FIRE, SAFE (bolt operation) and SAFE (bolt locked) positions when `rolled forward`. An integral button on the wheel needs pressing to move from fully locked into the other two modes and this catch is also used to disengage the bolt stop when removing it from the gun. When locked, the bolt handle can also be clicked further closed, I presume to flatten it even more to the side of the gun when carried?

Chassis units are par for the course on Police/Military style rifles and with all the adjustments usually featured, this one showed good and bad points. Included with the gun is a Versa-pod bipod, which clicks onto a spigot projecting from the forend’s tip. Offering cant as well as lateral tracking movement, both with tension adjustment, height adjustable legs with sprung release catches are shown with notched legs for precise setting. Giving 6-9” of height adjustment, the bipod can be quickly folded either backward or forward silently by just squeezing the legs together.

Recesses on the sides of the forend accept Picatinny rails available in various lengths for accessory mounting, some of which are supplied. A full length UIT rail runs along the bottom to the mag well and after the grip. The butt folds to the left by pressing a button atop the hinge, the shape of the abutments forming the locking bite which is like a bank vault. It has to be unlocked to deploy too and is it is brutal but 100% effective, and won’t slip or rattle in either position and of course allows easy carrying and bolt removal.

A thumbscrew controls the adjustable cheekpiece with markings for position on the right hand side. Its square top is reasonably narrow and shows about 5mm of lateral adjustment. A 14 ¼” length of pull is generous these days and quite welcome in my mind, although not adjustable it can be altered using spacers. The recoil pad is adjustable vertically and is finished off with a hard plastic pad that doesn’t grip the shoulder pocket.

Finally we have two good and bad features. The monopod has a release catch on the left of the butt for the thumb to press and instantly drop the foot to the approximate firing position. The shaft is threaded coarsely but ingeniously contains a foot with an opposing thread. When the entire unit is twisted it gives fine adjustment but as the foot doesn’t rotate, you don’t get any annoying drift left and right on your crosshairs. This was fantastic but to counter it, the underside of the butt was supported by an angular metal strap running from the monopod to the hinge area and all it did was interfere with a comfortable hand position. After 50-rounds I had a bruising across the back of my hand where my thumb and index finger meet and were the gun mine I would modify this area! QD studs are fitted on the stock and combine with the supplied swivels to offer an easy to remove sling.

Topped off with an S&B PMII 4-16 scope in Third Eye Tactical rings I set off to the range. The test group supplied with the gun had been shot with Federal Gold Medal Match 168-grain ammo and measured 0.65” at 100m for three shots. These European Police/Military guns have a knack of shooting a varied diet of ammunition with great adaptability and the Steyr was no exception.

I started out with PPU 168-grain Match, which was printing 1 1/4” at 100 yards. I then moved onto Hornady and Remington 168 Match, which equalled the factory test target, hovering just above the ½” mark for 5- shots. Barrel quality became evident as these were not one-off groups; as round after round just kept pummelling the same spot and 15-shots of one particular handload stayed within ¾”. Handloads using 175-grain Sierra Matchkings from a PPU case by Viht N140 gave a healthy 2650 fps, with 5-shot groups just below the ½”.

Useful is the magazine which offers a cartridge overall length (C.O.L.) of up to 3.1”. Given factory standard in 308 is 2.810” COL it could be a significant benefit if a handloader wants to experiment with this often key variable when searching for ultimate accuracy, especially if using heavy bullets that otherwise rob powder volume from the case!

The trigger, although a little heavier than I would have liked, was easy to hold onto the second stage and break cleanly with no hesitation. Light lubrication aided the bolt from new to ensure smooth fast feeding although the actual bolt lift was a little heavier due to its shorter lift angle. It easily disturbed the gun when cycled quickly and required a positive approach.

I really liked the Versa-pod and found it suited the gun perfectly; its slightly spongy feel encouraged a gentle squeeze forward from the firing shoulder to `load it` and gain most accuracy. Compared to some guns of this type, I felt the recoil to be slightly less dampened by the supplied brake although I never found it harsh. The chassis is actually asymmetric in construction and casts the recoil pad slightly off to the right and this may have contributed the feeling of a gun that when aimed from prone just seemed to sit so steadily on target the groups almost shot themselves. Much as I like the monopod, I rarely use them as I found a compact rear bag more useful on the range and eased the bruising to my supporting, non firing hand from the metal bar on the underside of the butt.