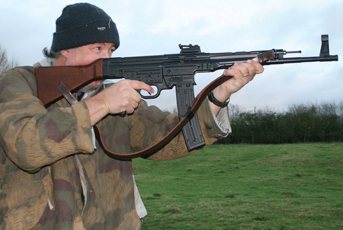 German Sports Guns (GSG) hit the UK a few years with a bang that ended in a whimper. At the time there was growing interest in 22 semi-auto look-a-like military rifles so their HK MP5 copy - the GSG5 (now GSG522) - caused quite a stir. Regrettably it did not live up to expectations and gained a bad reputation for unreliability and breakages. Their AK47 clone proved marginally better, but; give a dog a bad name! However, there were rumours of an StG44, which is recognised as the first true assault rifle.

As a student of military small arms I was intrigued by the fact someone would make a rimfire copy. At IWA 2012 I got to handle the StG44 and was impressed with the look and the fact the bolt system was entirely different. The brand is now imported by the Tunnel Range in Dorset who also bring in their .22 1911 pistol, suitably modified with a long barrel and butt extension. They are trade-only, but are appointing a UK dealer network, so I have Neal Parnham (Suffolk Rifle Co) to thank as he has signed up as their first retailer for the Eastern Region who lent me one.

The rifles development is of great significance to modern weapons design and employment, but is an article in itself. Suffice to say it was designed as a selective fire replacement for both the full power 7.92x57mm Mauser K98 and the 9mm MP40 SMG in service. It did this by using an intermediate cartridge the 7.92x33mm Kurz (short). Not as powerful as the standard 7.92 but more so than the 9mm, much like the later Russian 7.62x39mm and AK47!

The designation StG stands for Sturmgewehr (assault rifle) and the gun is near identical to the earlier variants the MP43 and 44. I have shot an original and it’s big and heavy, tipping the scale at near 12 lbs loaded. Hardly surprising as it’s made of steel stampings. We must bear in mind this version is a .22 semi-auto mech with a cosmetic outer body cashing in on the iconic nature of the original and they have done an amazing job! It’s also heavy at 10 lbs, which is a lot for a .22, given a S&W M&P 15-22 is around 5.5 lbs soaking wet!

The StG uses very little steel apart from the handguard, barrel and bolt mech. The majority of the rifle – upper and lower receivers, grip frame, cocking tube, handguard and sights are a zinc-based alloy; probably Zamak. This is where the weight comes from as it’s heavy unlike aluminium. These components are moulded allowing near 100% accuracy of detail.

The layout shows a barrel-under build with a 2.5” sight height over bore. Typical of GSG the 16.5” barrel is slim at just 0.473” OD, where it exits the forend there’s a dummy outer tube that gives the look and mounts the hooded, A-frame foresight. This ends in a screw-off muzzle nut that stabilises the barrel within. A fixed sling swivel is located on the right of the gas block as the original.

The rear sight is a tangent/U-notch type marked in increments from 01 to 10. GSG opted for a windage-adjustable notch, which though not original allows you to zero as the front blade is fixed. There is no provision for optics!

Controls are conventional with a safety catch on the left of the grip which flips up to FIRE and reverses for SAFE. The mag button is rear left of the well and feed from a 25-round clip with external follower button for ease of filling. The non-reciprocating cocking handle sits on the left and locks into a slot for manual hold open. Automatic hold open is provided by the empty magazine and there’s a sprung ejection port cover on the right.

The bolt system is a vast improvement over the GSG5! It’s drop-in, similar to those used on the CMMG, Spikes and S&W .22 AR15s. This self-contained design is easy to remove and clean. It’s retained in position by an L-shaped block and the ejector is riveted to the left receiver wall.

The butt is beech and of a simple, triangular shape. The rear is slotted for grip and there are steel corners at the heel and toe, on the top is a hatch that covers a storage trap, a slot is cut through for a sling – all as the original. The pistol grip scales are not wood but a plastic material coloured to look like it, but you have to look close to tell. The butt assembly slides over the receiver and is held by a push pin. Bruce Potts who has an StG told me you can get a reproduction sling from Soldier of Fortune.

On the right of the mag well is the engraving; made in Germany and cal 22LR HV indicating the recommendation for high velocity ammo. On the left GSG-StG44 and above it the word Schmeisser. Which I assume is a nod to Hugo Schmeisser of the Haenel Company who is credited with designing the original concept. The end result is an amazing recreation of the StG44, however, the spectre of previous GSG builds was still haunting me, so now to lay the ghost to rest or bury it again!

The test rifle was a demonstrator and Neal told me he had put about 300-rounds through it and it was not new when he got it. I gave it a rub down and put a mixed bag from subs to ultra hi-velocity through it to the tune of around 450-rounds. The magazine fills easily thanks to the pull down follower. Starting with Winchester Lazer HV I moved up and down through the power levels with no problems. I reckon I’d put 250-shots through it at that stage in both fast and slow fire drills.

Trigger pull is sloppy with 3/4” of take-up followed by a mushy, 5 lb release; not amazing but I’ve felt worse and could live with it!  The rear sight uses a flat, T-shaped plate and even with HV ammo you need to be setting it to around 07/08 to get a 25-yard zero. At this position the wings of the T stand proud of the base and let a lot of light in, which makes for a blurred image. This does not happen at 05 and below and I would file down the front blade to reduce the amount of elevation I had to put on.

Though faithful to the original the safety would be easier to operate if it flipped down to FIRE. The mag catch is well positioned and as you grip the empty your thumb drops on the release button. The weight is most noticeable, which though heavy makes for a stable firing platform! The magazine is long and can get in the way given your position.

Performance, well off a rest I was getting around an 1.5” at 50-yards with care, which is good for irons! Despite GSG saying use HV ammo I found that the faster stuff opened up groups, best results came from Lapua’s Standard Club.

By now the rifle had about 500-rounds through it and had not missed a beat apart from a single duff cartridge that did not go off, as happens. At this time I started getting problems! You’d be firing then click and no bang. Cocking, locking and looking showed an empty chamber and the top round just below the feed lips. Easily solved you just pull and release the follower button to punch the round up into the lips, but it kept happening more and more. It looked like the ammo column was tipping, which did not allow it to rise. As did failure to automatically hold open on the last round.

The magazine is held together by 10-screws, which makes it a pain to strip, and with steel going directly into plastic not a good idea either. I gave it a blast of solvent and a lot of crud ran out, which solved the last round hold open and to a degree the feed problem. As I said I have no idea how many rounds this gun had done before it got to me, so it might have had some serious hammer.

The StG was surprisingly reliable in terms of the mechanism; easily as good as my Smith & Wesson M&P, though does not offer its accuracy potential or versatility. The magazine issue is of concern, though it might have been a one-off, only a new replacement and further testing would find that out! I find myself liking the rifle though it’s in a very specific slot and will be more for sad buggers like me who like guns of this type and are prepared to live with iron sights.