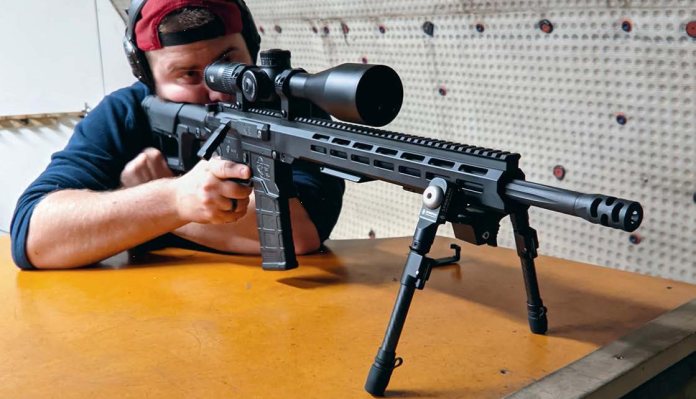 A few months ago, I reviewed an excellent semi-automatic AR-style rifle chambered in .22 Magnum rimfire (WMR). It was made by t2, a brand originating with the Tunnel Target Sports Centre (TTSC) located outside Charmouth in west Dorset. Well, as it happens, that rifle - impressive as it is, and with all the potential it holds for new longer-range action-shooting disciplines - is just the tip of the spear as regards t2’s drive to become a leading producer of UK-made rifles and accessories.

A second visit was therefore called for, and this saw me trying out two of t2’s centrefire creations: a rifle in .223 and a carbine in 9mm. Both in UK-legal straight-pull format. In addition, I got a sneak peek at a section-5 (select-fire) version created to give Her Majesty’s Government the option of equipping Britain’s armed forces with a personal weapon made within these islands, instead of bought-in from abroad. Were this a world where design and construction counted for more than politics and influence, I’d say t2’s candidate was a shoo-in, given certain unique features I’ll come to later.

Central to t2’s philosophy is that - where possible - parts should be designed, made and finished in the UK, either by themselves or their industry partners. This makes for a faster, more robust supply chain while rendering the path from design to production more agile and quality-assured.

Complete t2 rifles are distinctive, due to their unique combination of monolithic handguards, stepped magazine wells and (where relevant) chunky straight-pull charging handles. Not to mention the striking custom Cerakote finishes many customers understandably opt for. Nevertheless, every part is dimensioned for interchangeability.

This means you can mate any t2 lower receiver to any t2 upper (rimfire or centrefire), that any t2 receiver will play nicely with a true mil-spec counterpart from another manufacturer, that any mil-spec upgrades will fit, and that t2’s lowers are compatible with a wide range of magazines for both centrefire and rimfire cartridges.

That said, buying a complete rifle from t2 makes sense, since their uppers and lowers are designed not merely to work together, but also to align perfectly, with no mismatched angles, materials or finishes. There are no castings, stampings or extrusions either. Instead, receivers, hand-guards and handles alike are precisionmachined from billets of T6 aluminium.

For barrels, t2 work with Sassen Engineering in Birmingham. Standard barrels are chrome-moly steel and finished (threaded) to 12.5” in .22WMR, 15” in 9x19mm and 18” in .223, though stainless steel and alternative lengths/threads can be specified if preferred, as can some very natty muzzle brakes. Because t2 makes all their rifles to order and sells direct to their customers, your rifle can be as unique as you want it to be.

The only major parts t2 don’t yet produce are grips and stocks, but give them time! Currently, Magpul items are fitted as standard, but t2 recently launched a great-looking PDW-style collapsible butt-stock of their own, whose immediate success bodes well for their plans to offer a wider range of rifle and optics accessories.

Now for the specific rifles that I got to try out on TTSC’s indoor ranges. After passing through TTSC’s wellstocked on-site shop, the first stop was the 100m range. I had an hour booked with the .223, but a delayed start and the prompt arrival of the next booking taught me an overdue lesson - shoot first and take photos later! Consequently, I got under 20 rounds downrange. Few shots admittedly, but informative nevertheless.

Firstly, the cycling was impeccable. The charging handle was easy to grip, the bolt-head locked and unlocked without a grumble, the return spring compressed and expanded with exemplary compliance and vigour, rounds fed eagerly into the chamber and empty cases were smartly ejected on a consistent trajectory.

Secondly, the rifle was steady as you like, thanks to the Magpul PRS Lite stock and MOE K2 grip at the rear, a Spartan Precision Valhalla bipod and capable t2 muzzle-brake up front, plus the absolute solidity of its tightly-toleranced build.

It was wearing some smart-butaffordable glass in the form of a new Vortex Venom 5-25x56, whose chunky 34mm main tube, first-focalplane specification, and impressive clarity belied its sub-£600 price tag. The Vortex was held securely in a pair of Dolphin Gun Company rings with elegantly radiused edges.

A great choice at £100 a set. Unfortunately, all this quality couldn’t undo the evident disdain showed by the fluted Sassen barrel for budget American Eagle 55-grain FMJ ammo. A situation not entirely helped by an evidently mil-spec trigger unit. Talk about a ha’porth of tar! I would have loved to shoot the rifle some more, with some better ammo and a chance to master that curmudgeonly trigger, but it was time to move over to the 25m range and the 9mm carbine.

There I was hosted/instructed by the helpful Chris, who took my left-handed all-fingers-and-thumbs approach to weapon-handling in his capable stride, assuring me (with a straight face) that I was no worse than some of the customers for TTSC’s range packages!

The 9mm carbine was obviously shorter and lighter thanks to its 15” barrel and telescopic Magpul MOE butt-stock, but otherwise felt familiar, thanks to the commonality of its receivers and handguard with the .223, and to the CMMG 9mm ARC6 polymer magazine, which uses a standard (5.56-size) body shell with an internal spacer and integral feed-ramp to accommodate the shorter 9x19mm rounds. The t2’s standard mag well means CMMG magazines are currently the only option. 10 and 30-rounders are available. Both fed flawlessly.

The handle was again easy to locate and grip, plus the returnspring pressure was appropriately calibrated. However, identifying the appropriate level of energy input to eject the empty case reliably and then sticking to it was no easy matter. I, therefore, passed the carbine to Chris, who sailed through a full magazine, albeit not without an FTE of his own.

Otherwise, the gun seemed happy with the 124-grain Geco Super Clean FMJ ammo, which turned in consistently tight groups. This was undoubtedly helped by a better trigger than the .223’s, and the very smart Leupold VX-6HD 1-6x24 LPVO held securely on top by a 1-piece Southern Gun mount, but also – as before - by the solid build and capable brake that gave it a feel on firing that was both flip and vibration-free. Very nice!

A glimpse into the future

Our range session over, Chris headed off to attend to proper customers, no doubt with a sigh of relief, and handed me over to t2/TTSC proprietor Richard Clist. Richard is surely one of the most dynamic and forwardthinking individuals in the UK gun trade, constantly looking for new ways to give British shooters the kit and facilities we need to pursue our sport, while fostering the growth of British gunmaking and the craft, engineering, technological and manufacturing skills that entails.

So, we talked about the new PDW stock and a plethora of accessories he has under development, including new optics mounts, polymer magazines, cleaning solutions, and t2-branded spray paints developed in collaboration with a company in the Midlands and which he describes as “40% tougher than Cerakote”. We also talked about a forthcoming all-British-made bolt-action sporting rifle equipped with a Sassen barrel and speciallydesigned Form stock. This will be offered in both rimfire and centrefire versions, the latter chambered initially in 6.5CM and .308 Win.

The pièce de résistance, however, was the S5 AR-type rifle he has developed for military trials, which he produced for me to examine. Finished in a protective FDE coating, it has a conventionally-styled lower receiver with fully-ambidextrous controls and is equipped with Magpul MOE furniture and flip-up BUIS. So far, so normal, but aside from its quality, the rifle’s key asset is a unique design that mates a monolithic end-to-end optics rail with a slide-on C-section hand-guard that is totally integrated when fitted, but easily removable either for cleaning the gas parts or swapping out the barrel in what is a multi-calibre system.

The rifle has been developed for entry in the forthcoming L85A3 (SA80) Replacement competition, and Richard tells me he has agreements in place that would enable it to go rapidly into mass production if selected. Yet, he knows from experience that the virtues of this high-quality British-made rifle may be unduly low on the personal agendas of those leading the selection process. Whatever happens, however, t2 look set to offer a civilian version in due course, produced as a premium .22WMR semi-auto or a .223 straight-pull.

Richard has set t2/TTSC the goal of being both a manufacturer of quality guns and accessories in its own right, and a hub for the best products from leading British manufacturers, such as Sassen, Tier One and Dolphin Gun. Products are required to be high-quality, practical and affordable. That combination is ultimately about value and satisfaction. T2 rifles aren’t cheap, but the value is solid, and every t2 product sold represents a vote of confidence in the future of British shooting.