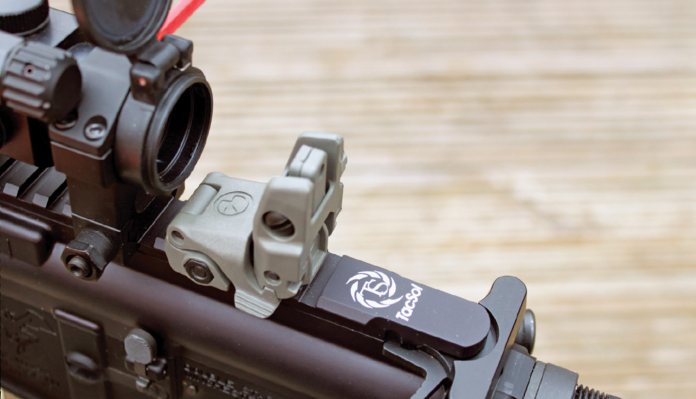 I have been shooting a South Yorkshire Shooting Supplies (SYSS) Rimfire Magic .22 semi-auto for years and won the UKPSA Mini Rifle postal open league with it in 2013, our club team also won.

The Rimfire Magic is, of course, based upon the Ruger 10/22 action. With a few modifications to the magazine release catch I have made this platform very, very quick indeed. The .22 semi-auto AR’s will never be as good as 10/22s which have better triggers and are more accurate. The AR platform was designed as a .223/5.56mm full/semi-auto centefire rifle for military use. 10/22s were designed from the outset as a .22 semi-auto. That is why I resisted for so long, I have shot many differing types of .22 semi-auto AR and always found them slower than my RM. But and here is the big BUT, an AR looks cooler than a 10/22, always has and always will. From all of the research I had done over the years I knew the way to go was to get a complete .22 upper and not a conversion kit dropped into a .223/5.56mm rifle.

A Pair of ARs

It was just after spending three hours on shooting drills with the SF Sergeant that I happened to wander into South Yorkshire Shooting Supplies when they had taken delivery of two different types of AR .22 semi-auto uppers from CMMG and Tactical Solutions. I took the opportunity to compare them side by side.

As a mechanical engineer I know a thing or three about machining, tolerances and finishes of metal parts and the clear winner was the Tactical Solutions upper. Bearing in mind that was without firing a single shot out of either of them, just looking at gubbins inside the uppers. Being a true Yorkshireman I did not want to spend two grand on a .22 semiauto AR. You can easily do this in the UK if you go to the right place. Roger at SYSS had some Double Star 5.56mm lower receivers in stock and so I went for one of them, the trouble was the TacSol upper he had got in I did not like. He had gone for the AR-22 M4 version which has the short hand guard and large ‘A’ frame front sight for open sights. I persuaded him to take both of those off and fit a Yankee Hill 12-inch quad rail hand guard being my preference to allow me to fit back up sights and a front grip. TacSol do two other complete uppers, the AR-22 LT and the AR-22 SB-X. Given the choice to begin with I would have gone for the LT, the AR-22 LT upper features a 16 1/2-inch 6061-T6 lightweight aluminum threaded end barrel with a 4140 button rifled steel liner and Hogue freefloating forend. I found the A2 grip too thin and not comfortable at all for me, so I asked Roger to get me a Magpul Mil-Spec CTR butt stock, in foliage green and an MOE pistol grip to match.

The TacSol bolt is CNC machined out of 416 grade stainless steel and has precision ground tool steel guide rails for strength and smooth reliable functionality. In addition, the AR-22 M4 includes a forged charging handle with a tactical latch. Each conversion is shipped with a 25 round Black Dog magazine. The bolt latch is on the left hand side of the bolt and locks the bolt in the forward position. Pulling back on the latch unhooks it from the action body. The top of the action has a Picatinny rail and the Tactical Solutions logo is painted on the back of the rail. It has a forward assist button on the right hand side of the action but .22’s should never need this.

I hated the trigger when I first shot the gun, the 7lb pull was atrocious. I could not double tap the thing anywhere near as fast as my RM. ARs from the box have really bad triggers so be prepared for that. Back to the aftermarket parts and a set of JP springs for fourteen pounds has cured it. Roger can work on the trigger for the customer if they want, I have tried a few he has done and they are a vast improvement. I wanted the gun so badly Roger didn’t have time to play with mine. I also fitted a trigger adjustment screw up the grip screw hole but this fix is for experienced gunsmiths, on no account try this at home. I also fitted a Power Custom large magazine release button for £23 and a UTG rubber accuracy wedge under the back action pin, at two quid a ‘must have’ for AR shooters. The other thing to think about is fitting Power Custom receiver shims, these are expensive at £23 as you only need one but I fitted one anyway, it does take all the play out of the upper and lower receiver.

Roger sourced extra Black Dog stainless steel lipped X-Form magazines for me. One came with the TacSol upper and I wanted the same mags; they do work very well. The standard M4 muzzle brake had to go, a dedicated .223/5.56mm brake from Dave Wylde for £75 make the difference as the hole is made for a .22 round with well-designed vent holes and apertures. The brake comes down the barrel to hide the thread and can be indexed/ aligned with shims, it’s fantastic and works even better on .223’s.

Sights-wise I fitted an Aimpoint red dot at they are the best you can get and I had one spare in the gun room. The back-up sights I fitted are Magpul PTS in foliage green to match the other furniture, I should not need them as I carry a spare battery for the Aimpoint sight in the MOE grip, but you never know. They come up in a few seconds and I can use them through the Aimpoint sight. The Aimpoint’s bright red dot and the open sights have exactly the same aiming point, the red dot sits dead on the top of the front post. Careful choice of the height of the mounts for the Aimpoint was needed to achieve this. It also shows the TacSol is machined correctly as the Yankee Hill hand guard is made for center-fire AR’s and both line up perfectly.

I love the ease that you can strip an AR for cleaning, it’s much better than with a 10/22, which has to come out of the stock, take out the trigger etc, etc. The beauty with an AR is you can then buy aftermarket bits which I did. I got a Magpul MOE trigger guard to match the pistol grip as well as a short Magpul MOE forward hand grip also in foliage green. I did have to fit soft rubber Picatinny rail covers around the forward grip on the underside and left and right hand sides to make it more comfortable to shoot at speed. A Go Pro mount on the underside of the hand guard and another one on top of sight finished of my add-ons.

The gun shoots inch groups at 50-metres with the red dot sight. It’s at 15-metres where it shines, the safety catch is the only thing on the gun that is more ergonomic than my RM, it is easier to use. For El Presidente drills it is very good, the large magazine well speeds things up.

Do I now think the TacSol AR is more ergonomic or accurate for rapid shooting than my Rimfire Magic? Err… no it isn’t. Am I regretting buying it? No I’m not. It is the nearest thing you can get to a Military semi-auto rifle in the UK and as such is worth having. The .22 ammo is cheap and it’s a good job too. I shot 500 rounds through my TacSol the other day in two hours with only one light strike as the only malfunction. Light strikes can occur when you fit the JP lower powered trigger springs, but one in 500 in not a bad average. I would rather have that than the standard trigger pull weight. I held out for years but now I too am a black rifle fan, semi-auto of course not straightpull, that’s not a real AR is it!