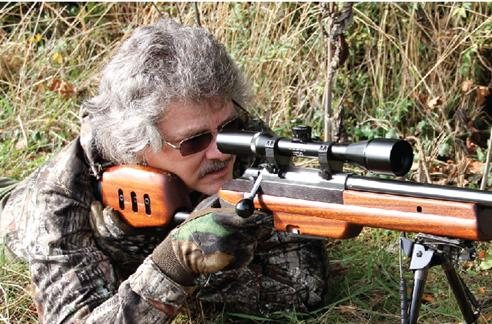 The Tikka M65 is one of my favourite sporting rifles, along with its smaller brother the Tikka M55 but the M65A is a completely different beast, despite the single letter addition to its name. It’s a rare animal these days and much sought after due to its quirky design and use in classic sniping competitions but primarily due to its incredible accuracy.

Introduced by the Tikkakoski arms manufacturer of Finland in 1988, the M65A model was a radical departure from their usual sporting and Biathlon styled rifles. Yes it was originally designed as a potential Sniper rifle for the Police and Military but it has seen uses for long range Varminting and even stalking!

This model was only produced in 7.62 NATO, so .308 Win shoots fine. Every rifle uses specially selected parts for best accuracy potential and the M65A had some really interesting design features to the bolt and action in particular. It looks ungainly but in fact it is comfortable to shoot, superbly accurate but very difficult to find now, as they had a short production run due to the high costs of manufacture.

Really odd or weird looking best describes the M65A appearance but it`s all for a good purpose. The barrel and action are why it shoots so well. Factory-selected for internal uniformity, it’s 24” long, with a heavy varmint profile for rigidity and the rifling pitch is 1 in 12” twist rate for the NATO rounds. The barrel is also free floated along its entire length, mainly due to the unique way the action is bedded. It’s all steel, with a flat bottom and instead of directly sitting into the void as on conventional rifles, the M65A uses a separate aluminium chassis system instead.

This provides a large flat surface area for the stock to attach to and also allows the entire barrel to free float, this all adds up to better accuracy in any climatic conditions. The action itself is also note worthy! This model uses the patented synthetic bush made of Polyarylamid, that the rear of the bolt rides in. This in turn sits in the action and as the bolt is operated, it literally glides in this superb slick bush. This is also aided by Tikka`s larger than normal plastic bolt knob, to give a good hold.

But there’s more; the trigger is a 2-stage marvel. The first is smooth and the second adjustable from 800 grams to 3KG and breaks like glass. The blade too can be repositioned for a perfect feel by a small adjusting Allen screw.

Like all Tikkas, the magazine is quick detachable; the release is by twin sprung buttons either side of the mag well at the base. It shows a single-column, 5-shot box, as used on Tikka’s M55 Biathlon model but not the M65 Biathlon as you would think. The stock is the most radical feature and a real eye catcher. It’s actually made in three parts, utilising traditional walnut with aluminium inserts. The forend section is hollowed out to reduce weight and has a bedded supporting screw section and accessory rail underneath for a bipod attachment.

The second section is the pistol grip with a stippled finish; it has an embedded aluminium tube that forms the support for the butt section and recoil pad. It offers an adjustable length of pull (LOP). The walnut cheek piece is separate and clamps to this and is also height-adjustable with three screws. It looks a bit odd but is superbly comfortable and can be set up to pretty much suit any shooter’s anatomy, or optic.

I have used several Tikka M65A models over the years and all have been superbly accurate but you do need to check a few points. Due to their modular system of manufacture not all sections might have been the original ones and can be swapped. It`s not really a problem but the walnut sections might not match which is a give a way. Also, due to the separate cheek piece section, it is quite thin, as it sits over a metal slider and so check there are no splits caused by mishandling or over tightening the securing bolts. Finally, the pistol grip can also crack if the rifle has been dropped but apart from these points, the M65A is a true classic of its time- the late eighties.

It has to be said that the M65A is a bit ungainly, as it certainly is muzzle heavy at 45” long and that’s without a sound moderator fitted but most people will shoot this off a bipod anyway, so no probs. I love the stock look but in use for me, being a bit of a gangly git, I find that even with the cheekpiece in its rear most position, the length of pull is too short! This means you are a bit cramped and for me your cheek sits very far forward on the wood, but despite this the upright pistol grip and rear hand hold for the supporting hand gives a rock solid hold.

That bolt is silky smooth and feed from the single stack mag is totally reliable and positive with a solid lock up, aided by the oversized bolt knob. The trigger too is a gem, Tikkas are usually and certainly a contributing factor to the great accuracy. With its 1 in 12” twist and 24” floated barrel ammo selection is important!

I shot many types of factory ammunition through this M65A and all weights from 110 to 165-grains shot very well, even the heavier 180-grain loads stabilised well in the slower twist rate. Best though by a long shot were Remington’s Match grade 168-grain, that printed tiny, 3-shot, near touching groups at 100 yards. At 300 yards, the M65A was still capable of 3”, which is pretty impressive for what is in reality an old timer and that’s with factory ammo!

GOOD FOR AN OLD TIMER!

Scope wise I had to fit a contemporary model, so opted for the superb and equally rare Israeli Nimrod 6x40. These were used on the Israeli Galil ARM, 7.6 NATO semi auto sniper rifles and sported German optics with unusual sight adjustments calibrated specifically for the .308 Win M118 mil-spec round. That’s not the unusual part but what is, is the siting of the windage adjustment turret on the left of the scope, where illumination or parallax adjustments usually sit. In fact it’s a far better placement, as on a bipod you can adjust in the aim with minimal movement.

Compared to the price of some new ‘tactical’ rifles on offer these days, the Tikka M65A seems a bit of a bargain for sub £1000, especially as it gains in value every year as a classic. It’s a lot more fun to shoot than the host of identical, modem, sniper-type guns and every bit as accurate if the previous owner has not mullered the barrel with bad, none existent or poor cleaning. But it has to be said that spares are nonexistent or at least hard to find although some common parts from Tikka M698 rifles can be made to fit. But don`t lose the magazine, as these are very hard to find especially the 10-shot version.

Having said that, if you are after a .308 Win and just fancy something a bit different, then the Tikka M65A, despite its name, is very different indeed! Rifles are no longer in manufacture but are still around, so it’s probably best to search on dedicated firearms sites. Plus, and like any other rifle, you could get it re-barrelled in an identical build with the option of other 308 head-based calibres like 243, 7mm-08 or even 6.5 Creedmoor or 260 Rem.