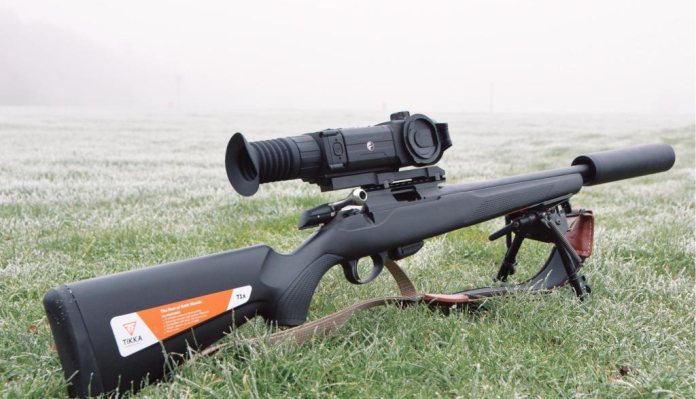 Tikka were really smart when they decided to make a rimfire with identical action footprint dimensions to the longstanding, almost iconic T3. The T1x in 17 HMR has a 16-inch/400mm cold hammer forged barrel with a ½-inch capped thread behind the well crowned muzzle. It’s 18.5mm muzzle diameter tapers out to the reinforce, retaining a heavy barrel look yet without excess weight and muzzle velocity figures proving nothing is lost from this cartridge in the quest for compact handling. The blued matt finish is perfect for a practical hunting gun that resisted any rust spots from the rain, even when temporarily stored in a damp rifle case for several hours before a proper clean and back into the safe. The Tikka barrel’s unusual secret is that there is a toe like projection beneath it, that allows the shorter upper visible rimfire action length to use the same stock of its larger T3X brother. You won’t notice the clever action design unless you take it out of the stock. Tikka has even gone to the extent of using a fillet type spacer in front of the injection moulded stock’s inlet to form a solid bedding point under the barrel’s reinforce, yet still floating the rest of the forend away the barrel. For anyone wanting identical rimfire and centrefire sporting rifles with handling familiarity, Tikka have really hit the target for you.

The seats into the stock with twin (5mm Allen key tipped) action screws fore and aft of the trigger guard/magazine arena, you will similarly notice that the tang at the rear of the action projects a little further backward, to make it the same length as a T3x. There are 11mm dovetails machined atop the action for scope mounting, although I fitted an extended Britannia Picatinny rail, giving the rifle more compatibility through the winter months when mounting night vision sights. The seamless fit between rail and action indicates all is machined straight and smooth. An overall octagonal action profile with alternating radiused and flat facets, allows an excellent single-stage trigger mechanism to fit behind the well for the 10-round magazine.

Tikka have certainly put the money into tooling up for a superb magazine design, easy to load from the top with the rounds staggering left/right naturally as they drop in with no hassle at all. Rim overlap is never a problem with a gentle spring follower completing what appears to be a market leading design. The mag slots easily into this tapering mouthed `well` with a sprung catch at the front allowing one handed removal. I was unable to make it jam in any way, no matter how carelessly I deliberately fumbled it into location, even during darkness with cold hands. About 10mm stands proud below the stock’s underside, it has smooth radiused edges and is unlikely to snag or limit manoeuvrability of the gun in any way. You get a full-sized bolt release button on the left side of the enclosed action and a minimal cut-out for reliable brass ejection. The underslung trigger housing offers a 7mm wide, vertically ribbed steel blade with Tikka’s characteristic single stage 1-2kg trigger pull without any creep, this one measured 1400-grams with zero overtravel.

T1x’s bolt exhibits Tikka’s accepted precise feel with excellent machining and surface finishing for a light smooth stroke. It will NOT jam when cycled at speed and I have tried unsuccessfully to make it even stutter in transit, without success. The feed nose on the underside of the bolt face aligns with the magazine’s rear cut-out to draw rounds smoothly, feeding them into the chamber with the single, right-side extractor claw clipping fully over the rim. The bolt locks at the rear with a single lug as part of the 60mm teardrop capped handle; just 45-degree lift required to open and cock the action, with plentiful extraction and strong grip on the case rim before reaching the stops on its 27.5mm rearward journey, flicking the case free using a fixed ejector sat below the left side bolt raceway. A long spring, like the Sako Finnfire’s, in the left-hand receiver wall makes sure that the case flies well. Just to note, even the flatter nose of 20gr Hornady HP ammunition fed well, which cannot be said of all 17 Rimfires, several of which I have tested and seem restricted to just 17gr Ballistic tipped ammo for seamless cycling of bolt.

The T3x stock needs little introduction, other than it arrived with just a slim solid plastic buttplate fitted, with short 13- inch length of pull. I swapped this for a thicker unit, to increase length and, being rubber, gripped the shoulder pocket more securely. The original makes the gun perfect for smaller shooters, but I dislike plastic buttplates for being slippery and never locking into position well. Two screws are a 60 second job to whip out and swap the range of Tikka accessories on this stock; grip elements can be changed over but crucially, the injection moulded polymer stock is made in one piece and remains stiff along its axis, allowing the barrel to float regardless of shooting position. Studs are fitted front and back for sling or bipod and the trigger guard is spacious for gloved fingers to safely operate the trigger. In fact, clumsy gloved hands and fingers are so well catered for here, yet it’s hard to forget that it remains a delicate handling rifle requiring only fingertip pressure to operate any function. The comb is slender, shows no additional cheekpiece but remains versatile and ambidextrous, which is good, as no ‘lefty’ is currently available.

A steel recoil lug sits at the front of the action’s underside, with the bottom metal clipped firmly into place below it. Respectable mould lines and straight lines/tolerances will put many other injection mouldings to shame. The action features two grub screws that I haven’t fiddled with, but I suspect are what locks the barrel tenon in position, possible future barrel change options are probably planned? A two-position safety catch sits to the right of the polymer bolt shroud and cocked action indicator. It locks the bolt with the trigger ‘safe’ in the rearward position; ‘fire’ enabled by rolling it forwards, silently, under your thumb, where its distinct serrations avoid any slippage that would cause that undesirable ‘click’ to spook game. With the 20mm recoil pad in place, the rifle sits firm in the shoulder, with a 13¾-inch/350mm length of pull suiting handling versatility on a rimfire.

There is a homogenous relationship in ergonomics of rifle handling, which here with the short bolt throw, minimal mechanical input needed, ideal reach to trigger, length of pull and stock profile (the fact it’ just like a full-sized rifle so many of us are familiar with), it feels ever so intuitive. I ran with Hornady 17-grain V-Max and 20 XTP ammunition, the latter of which I generally find to be the more consistently accurate of the two (in most rifles) and similarly here. Both easily stayed sub M.O.A. and a significant round count through this gun has shown an easily cleaned barrel not prone to heavy fouling, a clean every 50 rounds has proven satisfactory for maintained capability. After all that ammo down the barrel, guess what, the accuracy improved! The average velocities stabilised at 2548fps for the 17-grain and 2462fps for the 20gr XTP.

This is quite simply a thoroughly good rifle in all aspects, let’s see how the other manufacturers chase it, because they need to up their games to catch this slicker Tikka.