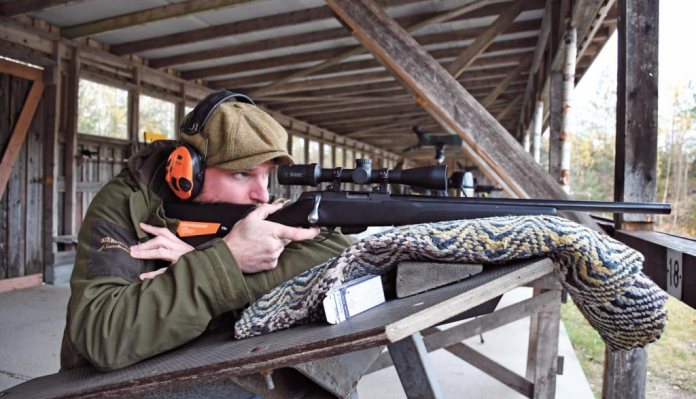 Although closely linked with Sako, who have shown us many iconic rimfire rifles, Tikka has not joined its stablemate – until now! I was lucky enough to see and shoot the T1X MTR in 22 rimfire in Finland after a factory visit in October last year but sworn to secrecy, until now.

Tikka’s stable of superb T3s was recently updated with the T3X variant with minor technical tweaks but of more interest, the modular stock system featuring replaceable grip and forend components. Well, if you have a great stock in your armoury, why not make a rimfire to fit it too and that is pretty much what Tikka has done. The T1X has styling features not uncommon to the Sako Finnfire family but the action’s footprint has been extended forwards, with an extended toe-like projection, which, although unseen to the casual glance, allows the diminutive rimfire action chambered in either 22lr or 17 HMR to literally ‘fill the boots’ of its big brother.

Key to the rimfire format is a large capacity, yet smoothly blended magazine, holding 10 rounds that is slightly proud beneath the stock, with its release catch to the front. It feeds from the centre of a front loaded spacious box whose injection moulded prowess is the hallmark of Tikka’s design and manufacturing standards. It feeds flawlessly and unlike rotary magazines, won’t jam as it gets sticky with lead and lube from the soft bullets.

The single stage trigger, like all those from the family, is crisp with an adjustable pull weight inside a spacious polymer trigger guard. When flipped over, this whole bottom metal assembly fits into the same space of the centrefire versions, so you get that great reach to trigger and most importantly, an adult-sized rifle with 14-inch+ length of pull, you can mount whatever optics you like, without feeling cramped. The action’s top shows neatly machined dovetails spanning the ejection port, from which spent sounds are ejected enthusiastically.

I shot a ten-round group at 100-metres spanning 45mm, which was very impressive (from the ammo too) from standard velocity ammunition and great gunfit that as expected, feels like a man’s rifle, yet with interchangeable recoil pads, can be set up for those wanting a smaller rifle. The grip is palmfilling with a slight swell for comfort, with no feeling of your hand slipping off from moulded in chequering assuring grip in all conditions. The barrel is fully floated in all conditions to avoid shifting zero and with sling studs fitted front and rear, great to carry with light weight, yet still stable when prone without shifting zero, and plenty of forend to fill your relaxed but secure grasp.

The bolt shows a short lift, with a familiar Tikka looking silver teardrop handle contrasting to the otherwise all black rifle. The safety is quiet to operate with your thumb and is on the right side of the action’s rear bridge, forward to fire and back for ‘safe’. It’s screwcut for a sound moderator and takes a few knocks to the stock without a horrible clunky echo so often associated with cheaper hollow injection moulded stocks. Medium taper barrel lengths of 16- and 20-inches are to be available but no left hander has yet been specified. But, no cast to either grip or cheekpiece makes things fully ambidextrous, other than the bolt handle, ideal for shooting from field positions like vehicle cabs, where the handling, if not the physical mass, remains very delicate and pointable with that great vertically ribbed single stage adjustable trigger Tikka owners adore.