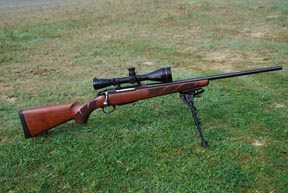 As most long term readers know I tend to wear my heart on my sleeve when it comes to product. If I like it then I get it and it becomes part of the gear I use in the field; there’s plenty of kit I will give the nod too, but a lot less I will actually commit to on a purely personal level. Unusually the subject of this test is a rifle I really rate, but have never been in the position to get one, as the window of need/opportunity has never been open at the right time… I speak of the Tikka T3; price-wise one of the best European, fixed barrel designs I have had the pleasure of using.

The T3, which now supersedes all previous Tikka rifles, is a rationalisation of this well respected design. Technically cheaper, though you’d be hard pressed to see where they have cut corners, the rifle comes in a number of finishes from blued/synthetic to stainless laminate, bin a good choice of calibres with action lengths to suit. Likewise options as you can go from the basic Lite all the way up to the Tactical model.

I See The Lite

The entry level model is the Lite with its blued finish and black, synthetic stock. It received the Shooting Sports ‘Best Rifle Award’ in the year of its debut. At the time this model cost around £600 and that included a floated barrel, adjustable trigger and detachable magazine as standard. Revisiting the T3 I have the wooden stocked Deluxe, which is no different mechanically apart from walnut furniture and a bit of extra decoration. Wood is not my scene but it shows a decent bit of plank that shoots very well. Given the fluctuating fortunes of Stirling as compared to the Euro and also the fact that we are a few years down the line, I was keen to see how much more the Tikka’s price point had moved on too.

The T3 is a simple and elegant design, the closed-topped receiver shows an 11mm internal dovetail and is also ‘drilled & tapped’ for scope mounts, which is a versatile option. The wood is a nice piece of walnut with a rosewood forend tip. Chequering is subtle but effective and laid down in 3-section panels, the comb is straight and of medium height with the butt showing a thick rubber recoil pad. The pistol grip offers an ambidextrous palm swell and the forend enough width to offer a decent hold too. Tikka fit QD sling studs as standard and also include a set of swivels. Though purely cosmetic the grip cap is silver with the T3 logo embossed into it, again a nice touch if you want something a little bit cosmetic that can still shoot.

The bolt shroud is plastic and angles down so keeping the line and look of the receiver. It shows a cocked action indictor tag that protrudes from the rear to indicate gun state. On the rear right of the action is the 2-position (roller) safety forward FIRE and reverse for SAFE. The bolt handle is angled back and shows a decent length and ball end for easy manipulation. From the box the trigger broke at around 4 lbs and though it can be adjusted I left it alone as it gave a crisp and predictable release.

The T3 features a detachable box magazine, made of plastic this single column design offers a capacity of 3 in most normal calibres, mine came in that great old soldier – 6.5x55mm Swedish. The release catch is located at the font of the well and pulls back to operate. The barrel is 22 ½” long and in the case of the 6.5 showed a 1-8” twist rate.

Picking the T3 up for the first time gives the impression of a light rifle; less scope it tips the scale at a pleasing 6 ¾ lbs, which makes it easy to carry. Keeping it in the GMK family I fitted the Deluxe with my Leupold 3-9x50 Vari-X II custom shop model in a set of CZ rings. Even with glass on top the rifle still feels more than handy. Ammo went to Sako with their 156-grain, Game Head load. This is quite heavy for 6.5 Swedish, as I personally favour the more standard 140-grain option.

There were no problems at all with the rifle, loading the magazine was easy as was cycling the action. The safety is well placed for quick operation with minimum disturbance to the firing hand grip and the crisp trigger easy and predictable to use.

Though the 6.5 Swedish is not an unpleasant calibre, the heavier 156-grain load does make the light T3 a bit snappy in recoil; again why I would choose the 140-grain, which even at the modest speeds generated by this cartridge will easily produce near 2,400 ft/lbs of energy. This combined with the long, pencil-like bullet with is good ballistic coefficient is what makes this old timer still so popular in Europe. In Sweden it’s the legal entry level round for moose hunting, and as I can attest to, first hand, it really does the job!

Though not a wooden gun fan, the Deluxe does look good in its timber furniture and due no doubt to the floated barrel and reasonably solid forend shoots very well as I have detailed. Though the stock dimension of the synthetic Lite are identical, if you want the more traditional/accepted look then the Deluxe has it in spades with no loss of ability.

However, it’s also about cost too with the Deluxe being £195 more expensive than the Lite and £120 over the standard wooden stocked Hunter model. They all shoot near enough the same and it’s only personal tastes that will dictate your choice. On that point in probably six years prices have not gone up dramatically, as I recall the Lite was around the £600 mark back then so has risen probably less than £90. Which is good in comparison to other European makes that have added between £250-400 since 2007 alone?

As ever I can find no fault with Tikka T3, well priced for a European design, the build is good no matter what you like and the choice of calibres (204 Ruger to 338 Win Mag) and options is equally wide: Lite, Varmint, Super Varmint, Laminate/stainless, Hunter, Deluxe, Tactical and Magnum calibre models. Currently I am not looking for a fixed barrel hunting rifle, but if I was then the T3 would be a serious consideration.