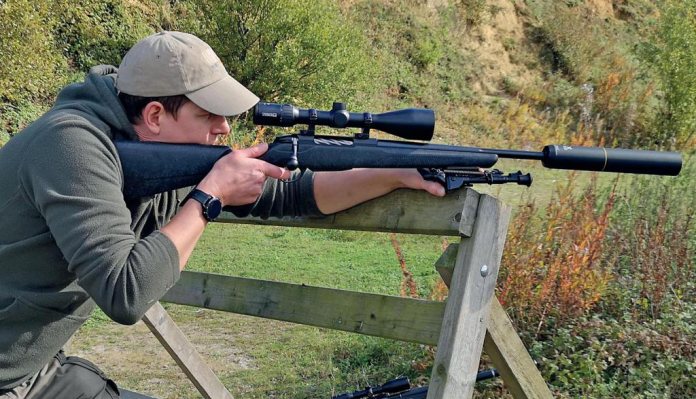 I am a fan of the Tikka T3x range of rifles because every single one that I have used has performed remarkably well straight out of the box. This is one of the reasons that I recently chose to buy a Tikka TACT A1 for myself. Surprise, its a shooter! On test is one of Tikka’s latest offerings; The Roughtech. Based on their T3x Lite, this rifle is aimed squarely at the hunter. It builds on an already successful platform by adding a few more features. Let’s see what they are.

Over time the range of T3x rifles has evolved, and now includes 26 models to choose from. There is something for the hunter as well as target and varmint shooters. The options are endless with wooden, laminate and polymer stocks, plus of course the aluminium chassis found on the TACT A1. The new Ultimate Precision Rifle (UPR) even comes with a stock made of carbon fibre mixed with fibreglass. For those who like a stainless steel barrel, there is that option too. Whichever one you choose, they all come with a 1 MOA accuracy guarantee.

GMK Ltd sent me a Roughtech chambered in .270 Win, which to me was a strange choice, as it can be a bit of handful when used in a light rifle! However, calibre choices also include .243, .308. and the extremely popular 6.5 Creedmoor. In an effort to reduce weight on an already light rifle, the barrel shows an 8” section of fluting which no doubt helps shave a few grams off. All calibre options come with a 20” hammer forged barrel, except for the Creedmoor which is available with a 24” tube. Considering the options, the latter would be my choice and I would avoid .243, as achieving deer legal energy levels from a 20” barrel with this calibre can be difficult. GMK told me that there are other calibres available to order as well, so it’s worth checking with them if there is a specific cal you are after.

The Roughtech comes threaded 5/8-24 and includes a thread protector along with a very nice, 2.75” long, pepper pot muzzle brake as standard, to help reduce recoil. The barrel has a high-quality black finish and shows a tapered, medium/light profile with a diameter of 28.5mm at the receiver, reducing to 18.6mm at the muzzle.

One of the first things I noticed when getting the Roughtech out of its box, was that the body of the bolt has a stainless steel finish and now includes spiral flutes to aid with the rifles diet. The bolt has two locking lugs, which provide a 70° lift angle. It can be removed using a sprung tab located on the rear/left of the receiver and it includes an 8cm long handle with a new polymer-capped, 25mm enlarged bolt knob. This small improvement helps the shooter to find the handle and to operate the slick bolt-action as quickly and efficiently as possible. Always a pleasure with a Tikka! The bolt face shows a claw extractor and a single sprung ejector which reliably punched the brass clear of the ejection port.

The receiver includes an angular ejection port that measures 8cm in length, designed to make it easier to single load. There is a gas escape port on the lefthand side. On top is a 15cm long dovetail which is also drilled and tapped so that you can securely fit a Picatinny rail.

The Roughtech comes fitted with a black, injection moulded synthetic stock, manufactured from fibreglass-reinforced synthetic materials, designed to increase rigidity, therefore maximising accuracy and performance. Sound familiar? It should do because it is the same one fitted to most of the T3x range. This time, however, it includes a new rough surface texture, in the form of a spiders web, over the entire stock, to help provide a solid grip in all weather conditions. My tester came in black, with new surface giving off a blue hue which I rather like. There is a desert colour option but this is only available via special order.

For those who don’t know, the stock is a modular design, making it compatible with a range of accessories. These including a choice of two interchangeable pistol grips, a standard sporting one (featured) and a vertical version, which is more suited to shooting from the prone position. Both include some aggressive asymmetrical chequering to help improve grip in adverse weather. To swap the grip, simply undo a screw at its base and it slides off. The forend shows a semi-flat shape and also includes a strip of chequering on each side. If some additional width is required, then Tikka offers retro-fit forends, in a range of colours, which can be bolted on top of the original using a single bolt and the front QD sling swivel.

The stock has a very solid feel and Tikka have added a foam insert to fill the void in the butt, helping to keep noise and vibrations to a minimum. They have also included front and rear QD sling swivels. It shows a length of pull (LOP) of 14” inc the updated 1” rubber recoil pad my tester came with. The LOP was a bit short for me but luckily it can be increased using optional spacers.

The trigger shows a grooved, curved blade measuring 7mm in width. It is positioned in a medium-sized polymer guard, allowing room for thin gloves. The proven single-stage design provides a pull weight of between 1-2 kg (2 to 4 lbs) and can be adjusted through the magazine well. The 2-position safety catch is positioned to the rear right of the bolt shroud, with Forward – FIRE (red dot) and Rear – for SAFE and bolt lock. The shroud includes a red cocked action indicator which is easy to see and feel.

The detachable, single-column, polymer magazine has a capacity of 3+1 and is loaded from the front. It is a solid design and only slightly protrudes once fitted, meaning it doesn’t get in the way. The release catch is located in a recessed area (protecting it from accidental manipulation) in front of the magazine well. A quick press and the mag pops out into your hand. A nice touch!

For the test, GMK supplied a Steiner Ranger 4-16x56 scope, which I attached using some of their Optilock mounts. I was pleased to find they had also sent me a large Stalon X149 reflex moderator to keep sound and recoil to a minimum. Ammunition was from Federal and included some Power Shok 150-grain soft points and some 130-grain Nosler ballistic tips. The published velocity figures are 2830fps and 3060fps respectively. I was interested to see how much speed was going to be robbed by the 20” tube and how a rifle weighing around 3kg (naked) would behave given the chosen calibre!

Straight from the get-go, I found it difficult to print consistent groups. The .270 cartridge is best described as aggressive; generating plenty of recoil, smoke, noise and heat haze with each shot. Shooting indoors only exacerbated some of these characteristics and as a result, the muzzle brake only stayed on for a few rounds! However, with more practice, I began to get comfortable and achieved a 1.1” 3-shot group at 110 yards with the 150-grain soft points followed by a slightly better 0.9” group with the Nosler ballistic tips. When shooting three-shot groups the heat haze always made the last shot challenging. The achieved velocity and therefore terminal energy (see ammo table) was lower than the ‘on-the-box’ speeds, which is worth noting, but not by anywhere near the amount I thought it would be. A positive surprise.

The T3x platform is already proven and after using the Roughtech for a while, there are several highlights for me. The rifle is well proportioned and particularly handy, plus the materials used in the manufacture of the stock make it tough and extremely rigid, I mean it is SOLID. The new rough finish is effective and a welcomed addition, while the rubber butt pad is excellent, providing excellent felt recoil reduction. I can’t help but feel the barrel fluting is more of a cosmetic feature, but it looks great! The action is still one of the best when compared to the competition, it is slick and 100% reliable. Out of the box, the trigger is excellent, so no complaints there.

Overall, the rifle scraped under the 1 MOA guarantee, but given the cartridge and the rifles low weight the group sizes achieved were expected and still represent perfectly respectable performance for a stalking rifle. I would sum up by saying great rifle, but calibre choice is critical!