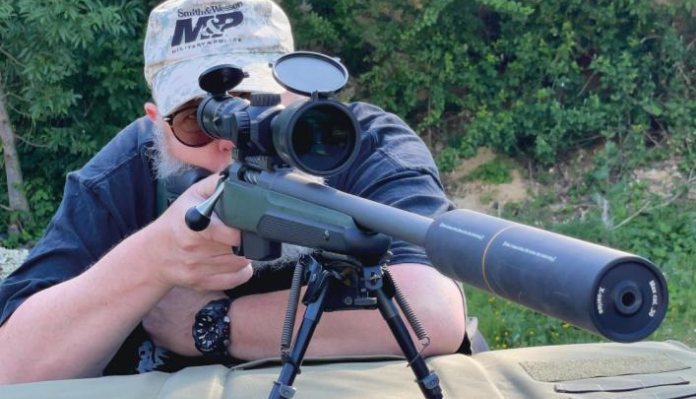 Tikka has always had an excellent reputation as rifle builders and the brand has a worldwide following. The introduction of the T3 series back in 2003 heralded a new era for the company and although feelings were mixed, this new model carved an equally strong following as had the previous and much loved and now discontinued pre-2003 guns. In 2016 they took the T3 forward again with the T3x version and have been building on it ever since.

I have tested the older Tikka models, and they were great rifles. But the T3 impressed the hell out of me, so much so, that the T3 Lite in .243 Win I tested in 2004, got Shooting Sports’ award for ‘rifle of the year’. Regrettably, I have never owned a Tikka, as at the time I had enough rifles to start a small war and I now regret that. This year I broke that duck with the acquisition of their T1x MTR .22 rimfire, brilliant little gun and I love it!

One popular type of rifle, regardless of the manufacturer, is the varmint, which features a heavier/ longer barrel and a more target-orientated stock, that can help get the most out of any calibre. Tikka is no different and has offered several variants, the latest being the Super Varmint Cerakote! I first shot this 2021 version at GMK’s media day, at the Holland & Holland Shooting Ground (now owned by Beretta) back in May and sweet it was with some serious potential.

This model shows the usual heavy and, in some cases, long barrel with calibres ranging from .223 Rem up to the larger stuff and including the current wonder kid; 6.5 Creedmoor (CM). My tester was in CM with a 23.7” tube. I’ve been running a Bergara B14 HMR (Hunter Marksman Rifle) also in 6.5 CM with a 24” barrel, which is very much the same thing, so I welcomed the chance to see what Tikka brought to the party!

Tikka has struck a nice balance with the Varmint as it uses the T3x stock, which is pretty much standard hunter/sporter-type furniture. The synthetic material used appears quite rigid and they have not stinted on the build. The inside of the forend is cross-braced for added strength and as with all versions, a steel recoil lug is inset at the front of the action void, with a corresponding slot in the underside of the receiver for location. The front and rear of the action voids show inset blocks, over drilled to act as pillars, although I could not ascertain if they were alloy or polymer!

The trigger guard is polymer with integral aluminium washers, doubtless to protect the material when it’s torqued down, as it could split. Tikka quotes two settings: 7 Newton Meters (NM)/62 inch/lbs for an aluminium bottom metal, and 5 Nm/42 inch/lbs for plastic. I’m surprised that on a rifle of this type they even bothered giving the option of plastic!

Trawling the interweb shows a lot of discussion about this, with some owner’s saying that their guns don’t shoot well using the Tikka settings, with a general impression that lower is better. I set mine at the recommended 42 inch/ lbs and had no problems at all.

The finish is called Roughtech and consists of a green outer with black over web for added grip. However, to improve shootability, there’s an adjustable comb/ cheek piece and a generous rubber recoil pad with spacers for length of pull (LOP). Also, Tikka’s fuller and more upright pistol grip and forend addons come as standard. I have retrofitted both to my T1x (same stock dimensions) and they do make a difference.

Heart of the matter

The heart of any good rifle is the barreled action and Tikka have done us proud here. The heavy, slightly tapered tube is hammer-forged, it and the steel receiver are finished in a tough and attractive Tungsten Cerakote. The muzzle is well crowned and shows a 5/8x24” UNEF thread with a protector. The bolt body has spiral flutes, which helps decrease weight and also reduces possible fouling build-up and therefore stiff operation. The twin lug head shows a Sako-type extractor (what else?) and plunger ejector, they have also opened the ejection port a little to improve single loading.

Tikka has always included their standard 15mm dovetail rail for Sako Optilok scope mounts, and the Super Varmint is no different. However, they also fit a onepiece Picatinny rail on top. Great idea, as those dedicated mounts cost around £150, and a decent set of compatible rings will save you some money with no loss of performance. At the front of the rail is a stud for a mirage band, again a useful accessory for a rifle of this type.

The safety is a simple 2-position lever, rear-right of the action. It pushes forward to FIRE and backward for SAFE, where it locks the bolt. However, a small catch at the front allows operation in this mode, which is good for unloading drills. The trigger is a 2-stage, adjustable unit (2-4 lbs) and from the box, it was set at a crisp 3lb break with zero hesitation. To adjust, remove the action from the stock and with a 2mm Allen key turn the grub screw at the front of the housing clockwise to increase and anti-clockwise to decrease the weight. It’s ideally suited to the longer range possibilities offered by a rifle like this. Rear-left is the bolt catch and a cocked action indicator protrudes from under the shroud.

Typically, the action cocks on opening and operation is easy with the elongated, teardropshaped handle with a large plastic ball end. Feed is from a polymer, single column, 5-round magazine (10-shot optional). The release catch is located at the front of the well and pulls back.

First impressions The Super Varmint is not light at a shade under 8 lbs (barebacked) and when you’ve got the obligatory, suitable scope, bipod and probably a sound moderator on board, you can no doubt add another 3 lbs to that. It’s also long at 43.7” (not including moddy) with its 23.7”, 1:8” twist barrel, which will squeeze the most performance out of the majority of 6.5CM cartridges. Given its main role of longer range precision and small and elusive targets, none of that makes a difference. I say this, as it’s the sort of gun you shoot supported, be it off the bonnet of your truck, prone or similar. The major impression is one of a well built and useable design. Snugging in behind the butt, wrapping my firing hand around the big pistol grip, adjusting the comb and getting a feel for the rifle is instinctive. So, promoting a feeling of instant shootability. Unlike some others I’ve tested in the past, you don’t have to work too hard to make it all happen with the Super Varmint.

Down, test and adjust

For the test, GMK supplied a Stalon reflex moderator and a Burris Four Xe 6-24x56 scope in some of their adjustable MOA rings. (I’ll be looking at these in a separate product test.) I added a Harris BRS 6-9” bipod and a selection of ammunition, which included some Hornady 143-grain ELD-X Precision Hunter and 120-grain Outfitter Non- Lead as well as some Norma 130-grain BTHP Match, Barnes 140-grain Match and my reload using a Sierra 103-grain TMK (Tipped Match King). Tikka says the free-floating barrel guarantees 1 MOA accuracy, but I had higher hopes for some of the loads.

Testing was done at 100m and performance was as I expected and, in fact, a good bit more (See Ammo Table). The best group was 0.26” (with two shots cutting each other) and the worst was 0.78”, with the other three hovering around sub ½ MOA. Feed and function was 100% and the modified ejection port allowed easy single-loading, a feature useful on any bolt-action rifle. The nominal 24” tube also got the best ballistics too, which is perhaps the ideal length for a 6.5CM. And, as I already mentioned, the Super Varmint is an easy and instinctive gun to use.

The extended bolt handle with its big ball end proved easy to manipulate and once I’d dialled down the trigger to its 2lb minimum, the crisp and creep-free break was to be appreciated. One thing I did notice was the magazine needs to go in dead vertical, otherwise, the rear end catches in but the front does not. It’s not an issue, but in the heat of the moment you need to have your drills down pat, it caught me out a couple of times, then I understood it was down to operator error. Honestly, one of the sweetest and straight-shooting rifles I’ve used in a long time!