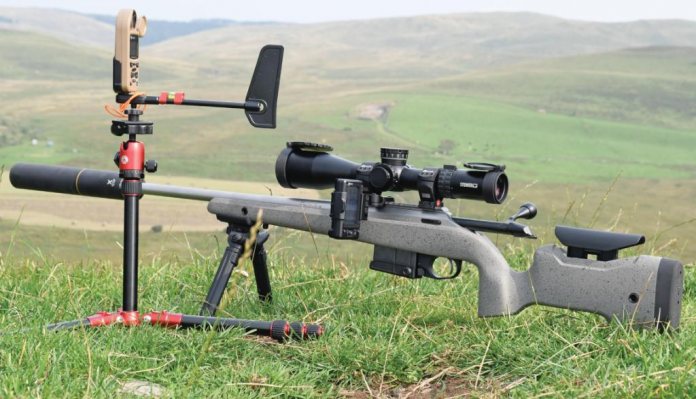 Tikka has launched their UPR (Ultimate Precision Rifle) with a composite stock combining the magazine feed elements of their TACT & CTR models. It’s a more tactile, light tactical style build still promising their M.O.A. capability with more crossover potential for those who still want to hunt with a precision rifle.

Tikka’s familiar mechanical format shows a 20mm diameter, 24”, cold hammer-forged stainless barrel with dished crown, threaded 5/8”x24 suited for brake or a moderator. GMK supplied a Stalon moderator too. All steel is matt-finished with a black Teflon coating on the bolt shaft which certainly gives a slick feel. You can order the rifle with a zero or 20 M.O.A. inclined Picatinny rail for scope mounting and the front shows a mirage band pin. Its twin lug action features a 70º bolt lift and long ball-ended handle, action stroke is 103mm.

Single-stage and set trigger options are available, my tester had Tikka’s reliably crisp, 1-2kg adjustable single unit with swamped blade with vertical grooves for tactile feel. Breaking crisply at 30oz, it felt delightful with its minimal 3mm overtravel. A 90mm reach enabled the index finger pad to rest securely and apply linear pressure to the blade, excellent! There is plenty of space within the trigger guard for a gloved finger, always a bonus!

I like Tikka’s two-position, safety catch; forward to FIRE and reverse for SAFE with the bolt locked. Operation is smooth, silent, and very tactile, a small feature that makes a big difference to experienced shooters. Feed is from a 10-shot, steel, double column, detachable box magazine with the top round being centrally positioned for smoother and 100% reliable operation. This, however, means mandatory front filling, which is not a big issue. This also allows an 11th round already in the chamber, pleasingly, anything single loaded through the ejection port feeds without fuss!.

The bolt has a recessed face with single claw extractor and plunger ejector; a design that has proved itself again and again.

The magazine release is an ambidextrous lever at the front of the trigger guard/rear well. Nice is the fact when pressed they free fall reliably with insertion being equally fast and slick. Rounds are presented undamaged to the chamber without scrapes from the feed ramp.

The UPR’s stock features a composite build of carbon fibre and fibreglass in the moulding to ensure both, rigidity, and durability. Ambidextrous in overall shape and layout, but so far, the rifle is only available right-handed. The barrelled action is retained by the usual, twin vertical bolts front and rear of the bottom metal with Tikka’s imbedded recoil lug that engages with a slot in the underside of the reenforce. Again, a time-proven recipe, which I have always found to be reliable! The moulded inlet is radiused to mate with the action’s underside using rail-like supports for a stress free fit.

I was slightly surprised to see a central seam running the full length of the stock, but I’m confident Tikka have done their research to make sure it will never part. However, there are slight air gaps in places that could be forced slightly wider with deliberate pressure! Both front underside sling studs are anchored with metallic reinforcements. I ran the rifle with a Magpul and Harris stud fitting bipods and was pleased to find a solid anchor location that in such a highly stressed region, reassured me of the stock’s performance, showing weakness here would expose deeper concerns to my mind.

This stock will also be available on Tikka’s T1X rimfire, a combination I am bursting to review! Finish is light/buff in colour with tactile surface finish and contrasting black stippling, it is practical, durable and offers excellent mechanical grip without any need for additional chequering. Tactile grip is the same from improvised shooting positions demanding alternate hand locations, with a forend slim enough for barricade openings in competition. Yet, still retaining reassuring rigidity throughout its length with no worrisome intermittent contact interrupting the generous freefloating barrel. The furniture also withstands applied pressure from items like Hog saddles, which grip without any zero-shift applied to the UPR.

The pistol grip is near vertical with slightly angular facets to the ambidextrous palm swells. It offers a thumb-up, or wraparound hold, although I found the former more comfortable with a flat area to seat the thumb on top. Depth is 75mm for three fingers to wrap it and easy/instinctive reach to trigger blade or, fingertip operating of the mag release.

I am reminded of Sako’s TRG stock’s profile, with a steep rise back up to the comb and adjustable cheek piece, controlled on the right side with a circular knob. In the case of the UPR, 29mm of additional elevation is available, but no lateral adjustment. But the cross-section is slender in profile fitting well under the cheekbone without undue bulk, so often encountered on bad stocks needing a rolled head position to avoid lateral jaw displacement. Length of pull (LOP) is 13.75”/349mm which is a bit short for me, but I’m sure spacers will correct this. The recoil pad is 24mm thick and medium firm throughout with no pressure points. I would not be surprised to see a fully adjustable unit presented later, offering height and angle, perhaps Tikka has left the composite stock a little shorter to accommodate this? The adjustable cheekpiece is reinforced so retains its shape without flex or harmonically annoying vibration through boneinduction into your head. Bolt removal needs the cheekpiece up or down as it will slide underneath if the comb is elevated, a nice factor if showing clear with ‘bolt out’ is required regularly.

I was not so keen on the bag rider/butt hook at the rear. It has 65mm of flat underside with a sling stud central within that and I had to bring my left elbow in much closer to the rifle to effectively reach back and push the rifle into my shoulder. This narrowing of the elbow ‘stance’ reduces span for prone stability and for me, slightly affected the solidity of keeping the rifle pinned into my shoulder when cycling the bolt or support versatility. Given this is a precision rifle, I think it worthwhile to comment because you need to have fine control of that rear bag for elevation adjustment as they are commonly used for this exact purpose.

Federal 150-grain, Nosler Ballistic tipped ammo was supplied to assure Tikka’s sub- M.O.A. 3-shot guarantee and I had no problem attaining cloverleaf groups at 100 metres. I took the opportunity to plan for some longerrange shooting to 850 metres on steel targets but used 168-grain, Sierra Matchking handloads. The reason: it is one of my go-to recipes, I trust the ballistics and it also shot extremely well without personalised tailoring.

The UPR produced 2830fps with the 150s and 2650fps with the 168 handload in the 24” barrel. I had a great 80-round afternoon clanging steel over a variety of distances, taking full advantage of the stock’s geometry, recoil stability and delightful trigger mechanism. Light bolt operation gives minimum disruption of position through shot strings.

Longer shot strings had the barrel hot and other than crosswind and thermal variations on a warm day, I suffered no concerns over thermal stability and zero shift on the Tikka barrel with deliberately harsh treatment. The 1 in 11” twist rate will happily stabilise heavier bullets like 175’s, maybe even 180’s, but I think the 185’s might be a step too far. It was good to shoot a 24”, 308, it felt slightly old school compared to so many short barrel modern rifles and re-joined me to the concept for a gun used mainly on targets.

However, I suspect the rifle will be more popular in the 6.5mm offerings and that would be my choice too. I grew accustomed to the stock’s underside and tended to use the soft bag as a grip assistant as well as an elevation control tool. There is no doubt the gun’s clinical linear recoil control and light bolt/magazine operation further belayed any doubts offsetting the slight bag rider/butt hook ‘chink in the armour’, all rifles seem to possess at least one of.

In essence, I enjoyed shooting the UPR and trusted it for personal pleasure, far more than usual work necessities require. It’s a great option for someone wanting a precision rifle yet steering clear of the chassis trend. It mimics the custom guns with reliable mag feed and mechanical consistency across externally challenging temperatures we desired 10-15 years ago.