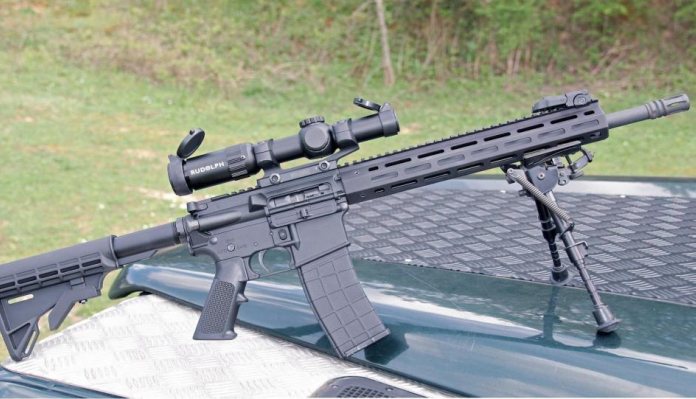 The world of .22 military look-a-like semi-auto rifles is a busy one and covers a lot of models from the classic, German MP40 and StG44 up to modern designs like the Beretta ARX 160 and the HK 36. But, by far the most popular, is the generic AR15, with a number of stand-out factory models, as well as customs from the smaller UK builders. Me, I’ve been a Smith & Wesson M&P 15-22 fan for many years, which, price-wise, is still the most costeffective 22AR out there. However, with it’s all-polymer construction and rather different looks, it’s a bit Marmite. But, where it really scores are that its controls are identical to a full-blown 223 Rem AR!

There’s nothing more annoying than using a 22AR, only to find that the automatic last round hold-open, bolt release and forwardassist are non-functioning, which is the case with many custom guns. Newer to the market, is Tippmann Arms’ M4-22 Tactical Rifle, which in essence, is an M4 carbinetype, probably the most popular of the genre. With a 6-position, telescopic butt, 4-way, Picatinny forend, flat-top receiver and fold-down iron sights, it’s a looker. What I have here is their M4-22 Elite L, pretty much the same thing, but and according to your view more up-market!

These two models should appeal to the ‘polymer-haters’ and purists too, as the M4-22 uses proper, high-strength aluminum uppers and lowers, and most importantly, offers a 100% real control layout and full functionality.

The only real difference between the Elite L and the Tactical Rifle M4-22s is the former’s furniture, which offers a 12” M-Loc free-float forend. Advantages here are a decent sized gripping area, without the added girth and encumbrance of fixed Picatinny rails, which can be a bit too much. Leaving just one at 12 O’clock for optical and iron sight mounting, which aligns with the section on the flattopped upper. M-Loc, as the earlier KeyMod, offers the user the ability to add or remove rail sections and adaptors to suit missionspecific requirements. Or, for the sports community; lights, grips ‘n’ lasers etc.!

The layout is standard AR15, with no extended or ambidextrous controls etc., however it’s compatible with most standard AR components and accessories, such as drop-in triggers etc. The left side of the lower receiver shows a standard safety catch, easily operated by the firing hand thumb; it flips up to FIRE and rolls forward for SAFE. In front on the upper, is the manual bolt release catch, which is also the automatic last round hold open, two functions that ensure good shootability!

On the right lower, in front of the trigger, is the magazine release button; again, well placed for instinctive operation, with the empty clip free-falling from the well. Above on the upper, the functioning forward assist plunger, that allows you to pump the bolt closed if you get a short round (not fully chambered). Plus, a case deflector and ejection port cover, always useful!

The trigger is standard, offering a 4.5 lb pull, which proved to be a lot better than most of this type I’ve encountered! The guard is just a hinged plate that can be unlatched to give a winter function or replaced with a bowed design. As always, charging the rifle is by the T-handle located in the rear of the upper that unlatches and pulls rearwards.

Furniture-wise, we’ve discussed the M-Loc forend, which I fitted a QD adaptor to, so I could mount a Harris BRS pod. The 6-position, telescopic butt is the improved Rock River Arms design with angled shoulder plate, controlled by a pull-up latch. Basic, but it works and is probably the most popular of its type. The pistol grip is the classic A2 with single finger grove. With the rage for tactical slings, the M4-22 shows an ambidextrous rear sling adapter plate at the buffer tube/ rear receiver junction.

Feed is from a 20-round magazine, that looks like a 223 Rem 30-rounder, but with a slight twist. Inspection showed the outer body is just a sleeve, pressing an integral catch allows this to slide down to reveal the real magazine with side buttons for easier filling. But without that skeleton look with the big slot in the side like my Smith; plus, it keeps the ammo cleaner. Nice touch; you get 2 x 20-rounders, plus a trigger lock and two short Picatinny rail sections and a plastic transit case.

As standard, there are fold-down/pop-up iron (well, plastic) sights that clip on to the Picatinny rail. They are very similar to the Magpul MBUS types with a twin aperture, windage-adjustable rear and an elevationadjustable post up front. To deploy thempress the latches on the side and they’ll automatically deploy.

Most 22ARs use some form of pre-packaged, drop-in bolt system that includes the return spring, not so the Tippmann! The large, round and stepped body runs in a circular bearing with the return spring in the buffer tube just like the 223 guns. On the right side of the body are slots for the forward assist. The barrel is a medium-weight, 16” tube, with 1-16” twist rifling and threaded ½ x 28 UNEF with a standard, slotted AR15 flash hider/ muzzle brake; so, if you want to fit a moddy, no problems! Overall fit, feel and finish is mil-spec and most acceptable.

For the test, I assembled my usual cross section of 22 rimfire ammo -sub-sonic, standard, high and ultra-high velocity, from: Mag Tech, Remington, Fiocchi, Winchester and CCI. I fitted a Rudolph 1 – 6 x24 Tactical scope, with a T- dot/circle reticle, a spec and pattern that suits these little rifles nicely! Filling the mag is easy and it takes the promised 20-rounds from the off. A tip here; being rimmed, the ammo must go in the mag so that the rim of the next case is positioned in front of the one below. If not, you will get stoppages, as the bolt tries to strip it out of the feed lips, this is operator error and one for the main causes of malfunctions!

The Elite L proved reliable with all types of ammo, including the Remington subs, which I have never found worked that well in a semi-auto mechanism before. However, you can always except a few rounds that are under or over-filled, which can cause velocity fluctuations, and so point of impact shifts and feed issues, it’s just the way it is with rimfire ammo! For me the Fiocchi standard velocity seemed to give the best accuracy, shooting ¾” @ 50m, with the CCI Min Mag at a quoted 1235 fps coming in around the inch. Feed was good too, which is probably down to the large and heavy bolt and the return spring in the buffer tube. I thought at first this might cause problem with the slower sub-sonics, but it was not the case.

Though I have never found the need to use the forward assist on a 223 AR15, this feature does make more sense on a 22 rimfire semi-auto platform, as you can have issues with short rounds. Here, I noted a slight design flaw, as there’re only six slots on the right side of the bolt near the front. Meaning the forward assist only works for the last few millimeters of travel, so if a round is out further than that you cannot pump the bolt shut. Pity, as all it needs is a few more slots!

The two short Picatinny rail sections are not M-Loc dedicated, but can still be bolted to the forend for adding lights and red dots etc. The trigger pull, though pretty much a two-stage military-type unit, was better than expected, a bit firm but readable and useable with a crisp break! But, like any decent AR15, the world is your oyster in terms of customisation. For me that would mean a drop-in trigger, ambi safety catch conversion, larger, Magpul-type pistol grip with back strap and maybe a lockable telescopic butt to reduce movement and increase stability. However, and overall, this is a good and workmanlike rifle as it is.