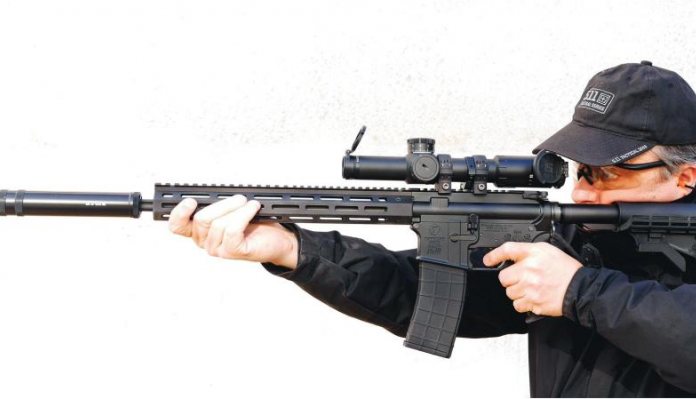 .22LR semi-autos used to mean Ruger 10/22s, and a whole heap of aftermarket fettling. Then came a slew of military-style replicas. It was great fun to play around with rimfire versions of the H&K G36 and 416, ISSC MK22/Anschutz MSR (SCAR-a-like), Kriss Vector, M1 Carbine, MP40, MP5/ GSG-5, Sig 552, STG-44 and Uzi, but none of them proved sufficiently resilient, reliable, ergonomic or accessorizable to hold the top spot. That unquestionably belongs to the AR15 platform.

Not all AR clones are created equal, however. As a prospective buyer, you need to decide how much authenticity, partscompatibility, and quality you want, and how much you’re prepared to pay for it. At one end, you have prestige builds on 5.56 lower receivers: but smart though these are, this isn’t always the best way to go, since they are always adapted away from the original centrefire design and typically add both weight and cost. At the other end, you have models whose resemblance to an AR15 is only skin-deep, with polymer parts and cheap castings replacing milled aluminium and barelystrippable internals that look straight out of a toy factory. That’s fine. They’re affordable. They shoot. They’ll get you started. But if you don’t want something better now, then the chances are you soon will.

This brings me to the subject of this review: the Tippmann Arms M4-22, in its latest variant, the Elite LF (light fluted). The company design and build their .22 ARs as exactly that: dedicated .22 rifles. So you can’t fit a Tippmann upper to a 5.56 mil-spec lower, or vice versa. They also use their own dedicated buffer, spring and tube, which are designed to work in harmony with their slick nickel-plated .22 bolt as integral parts of a blowback system.

This system also requires a dedicated charging handle, which rules out aftermarket alternatives made for centrefire bolt/ carrier groups. Although the M4-22’s receivers are solid aluminium, the charging handle is made from polymer with a metal latch. Modelled on the M4 pattern, it’s not a bad design by any means, but it would still be nice to see the company produce an extended, competition-optimised version as an upgrade.

The safety lever is also proprietary, but no such restrictions apply to the other shooter interfaces: so you can fit the full range of stocks, pistol grips, handguard, fore-grips, hand-stops, bolt hold-open (BHO) catches, magazine releases, muzzle devices and triggers available across the AR-o-sphere. That said, UK distributors Shooting Supplies recommend the excellent FAB Defense range of upgrades and accessories, and keep ample stocks, so their customers can upgrade their rifles right as they buy.

The original M4-22 has a basic mil-spec pattern butt-stock, handguard and A2-style pistol grip. As standard, the Elite model uses the same butt, but it sports a more modern, i.e. vertical (MOE-K2-style) Gen 2 grip, and an octagonal, free-float alloy handguard, complete with M-LOK slots for mounting accessories. The elite handguard is offered in short (9”) and long (12 3/8”) formats, the latter being the one fitted to the test rifle. Barrels are similarly available in short (12.5”) or long (16”) varieties and all are solid 4150 steel.

The choice is not just an aesthetic one. More fundamentally, it’s about control and speed. Longer barrels add weight and slow the gun down, whereas longer handguards add control and versatility. The Elite LF model, therefore, offers a solution to this dilemma: a long (16”), lightweight, fluted barrel that weighs even less than the standard 12.5” barrel. It looks great, too.

A central pleasure of shooting the Tippmann M4- 22 is that all the controls - charging handle, BHO, mag-release, safety, dustcover, even the forwardassist - operate exactly as per the 5.56 original. This is obviously good if you shoot both rimfire and centrefire ARs, but it also gives dedicated rimfire shooters all the functional benefits of this benchmark platform, as well as the satisfaction of handling a rifle that is a fully-functioning replica and not just a cosmetic copy.

Nothing sums up Tippmann’s success in fusing 5.56 authenticity with .22LR practicality like their magazines. These are outwardly scaled and shaped like polymer 5.56 mags, but inside there’s a fullyfeatured .22LR core with a 25-round capacity, metal feed lips, slotted sides, and a pull-down follower for easy loading. A pair of chequered square buttons at the top and bottom lock the core in either its closed or open position; and when closed, the 5.56 look-a-like outer serves as a protective sleeve, shielding the internals from debris. Every rifle comes complete with two 25-round magazines, and additional ones are available separately.

I shot the rifle using standard-velocity, roundnosed Lapua ammunition, with the factory A2 ‘birdcage’flash hider installed. I also tested it using a quartet of sub-sonic loads from CCI, Eley, RWS and Winchester, with a Wildcat Whisper moderator fitted to the ½” UNEF muzzle thread. Boxfresh, the Tippmann ran through the Lapua like a sewing machine, digesting a full box of 50 rounds without any issues. Even more remarkably, the sub-sonic CCI was almost as good, with just one stoppage: a failure to eject, presumably caused by an underpowered cartridge. The RWS produced a couple more stoppages of the same type but has a lower velocity, so this wasn’t surprising. With the Eley, by contrast, there were a couple of failures to feed, perhaps caused by the different bullet profile. The real outlier, though, was the Winchester load, whose heavy 42-grain bullets have an unusually long bearing surface that was clearly incompatible with the rifle’s chamber.

Accuracy was best with the Lapua, but more than acceptable with all the loads tried, except the Winchester, whose troubled relationship with the chamber presumably affected its downrange performance. The factory trigger breaks at around 5 lbs, preceded by a distinct if predictable degree of creep. I felt no disadvantage in this for fast, close work, but I’m sure a lighter, crisper trigger would tighten groups at longer ranges and could be a welcome fatigue-reducer for those whose shooting sessions involve a high round-count.

Tippmann have produced a rifle that functions exceptionally well, both as an AR15 replica and as a .22LR rifle in its own right. Also appealing is the variety of build options, and for my money, the Elite LF is the best so far, offering a great combination of handiness and control. It isn’t fussy about ammunition either (except for Winchester subs!), showing excellent reliability with a suite of popular loads straight out of the box. Meanwhile, the factory butt-stock, pistol grip and trigger are basic but entirely adequate. This is a smarter move than it seems because it allows the manufacturer to keep the base price down and avoids the futility of trying to second-guess individual preferences for higher-cost alternatives. All told then, the M4-22 is a genuine must-try, not just for AR15 aficionados, but for anyone looking for a smart, reliable, readily-customisable high-capacity .22 for plinking, competition or intensive rabbit control.