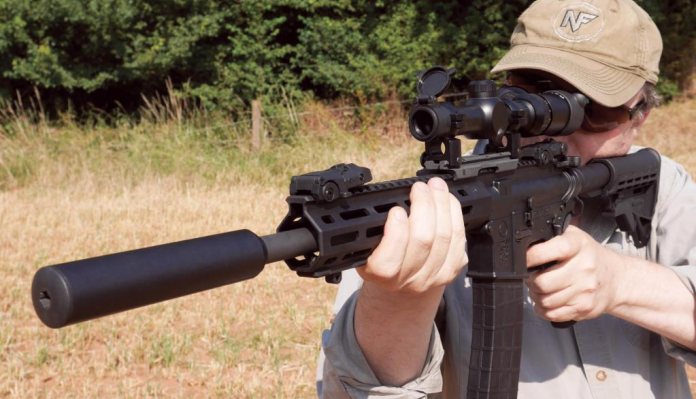 I had the pleasure of testing the original M4- 22 at the start of last year, and was thoroughly impressed by its authenticity, build quality and phenomenal reliability. I also liked the fact that the gun came complete with a spare 20-round magazine, extra rail sections for its polymer handguard, a security lock and a smart plastic travel case.

Even the standard trigger was pretty good, with a clean break to its 5lb pull. 5lb is too much for a precision build, but for practical work I reckon it’s about perfect; and, if you want to install your favourite aftermarket trigger, that’s no problem at all, as the Tippmann is built to be compatible with all kinds of AR15 parts.

The M4-22 was eminently shootable in its original guise, but importers Shooting Supplies of Bromsgrove were getting so many customer requests for a slimmer alloy hand-guard with an M-Lok interface that they persuaded the guys at Tippmann to make one. The result was the M4-22 Elite, recently reviewed here by Pete Moore.

This rifle, with its full-length 16-inch barrel and 12-inch handguard suited a lot of people, but there were enough requests for a shorter rifle that the M4-22 elite Shorty was born. Sporting a 12.5-inch barrel, paired with a 9-inch free-floating handguard, it drops the minimum overall length from 31.25-inch to just 26.75-inch and cuts the weight from an already-modest 5.7lb to a positively-dainty 4.8lb. As well as keeping the rifle handy with a moderator fitted, the reduced heft and size complement the versatility offered by the M4- style telescopic stock, making the Shorty even better suited to smaller shooters than the full-sized version. Where the Shorty really shines, through, is on a practical course; its added agility and dinky dimensions making easy work of negotiating doorways and barricades.

The original polymer handguard has plenty going for it, with an octagonal design that lets you add the supplied accessory rails wherever you want them; plus, the ruggedness, grip and comfort of polymer too. Aluminium offers its own benefits, however; delivering greater rigidity and a more precise and durable optics rail. And, whilst it may feel colder, it definitely looks cooler; offering sleek lines, undisturbed by a delta ring or an end cap. You don’t lose any versatility either, as you still get a set of accessory rails, and the new octagonal handguard gives you a full seven sets of M-Lok slots to play with.

The new hand-guard is also slim enough to provide a comfortable grip, but spacious enough inside to accommodate the width of most .22 moderators, making it possible to create a really handy and practical hunting rifle by specifying a standard guard and short barrel.

The handguard is secured to the barrel nut by four opposed grub screws, whose conical tips mate with a V-shaped channel in the nut, to hold the rear of the guard fast against the receiver. Meanwhile, a pair of square tabs butt up on either side of the receiver’s optics rail, ensuring alignment and preventing rotation.

The nut itself features a pair of straight flats, meaning that you don’t need a special tool to remove or refit the barrel, just a suitably-sized spanner. I wouldn’t normally remove the barrel for cleaning, but it’s nice to be able to do so when a more thorough going-over is required. (Note: before putting force on the nut, secure the barrel – not the receiver – in a vice, as this will avoid any risk of warping the receiver.)

It’s worth mentioning the magazines too. These show a telescoping design, with the main magazine body housed inside a protective sleeve that has the added benefit of resembling an authentic 5.56 magazine. Pressing in the pop-through button at the top of the magazine lets you retract the sleeve until a second button at the bottom locks the magazine open. The main body has slotted sides and a pair of nubbins attached to the follower that let you take up the spring tension with one hand as you drop each round between the feed lips with the other, making for quick and easy loading. When you’re done, just press in the bottom locking button and slide the sleeve back over the body until the top button clicks into place. At the time of writing, only 20-round magazines are available, and they aren’t compatible, as yet, with the wonderful McFadden Machine Co. Lightning Grip speed loader – but I am told that both issues are currently being addressed.

In the field, the M4-22 Elite Shorty was, like the original, an absolute hoot to shoot: superreliable and simply a ton of fun. As my local bunny population is only just starting to recover after a bad dip, most shooting was done on steel rabbit silhouettes at 50m, 75m and 100m. Hits were the rule, misses were rare, and sessions only ended when we ran out of rounds! The M4-22 shows a definite preference for US ammo, however, digesting all kinds of CCI fodder without a hiccough, but being prone to choke on more international fare. The exception was Eley’s new Edge load, making it a perfect choice for target shooters who would rather ‘buy British’.

The new handguard and barrel options lend extra appeal to what has to be one of the very best .22 ARs on the market. I really liked the short barrel but found the matching handguard a little short for my shooting stance, so my preference would be for a hybrid build (short barrel + standard handguard). However, you configure the Tippmann, though, its crispness of operation, quality of manufacture, and wonderfully authentic feel are sure to put a smile on your face.

My thanks to Antony and Roger at Shooting Supplies Bromsgrove for supplying the rifle, ammunition and accessories for this review.