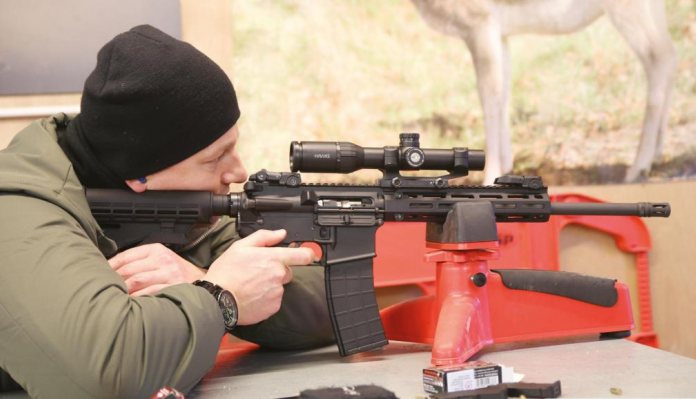 Tippmann Arms offers six, 22 Long Rifle versions of their M4-22, semi-auto AR15 rifle. Three don’t concern us, as one is a pistol, the second a State- Compliant version as to the butt configuration and capacity, which are purely US concerns. The third, the Sharpshooter, is the Elite with a Hawke Vantage IR, 3-9x40 scope and mounts. All are built using metal (aluminium alloy) upper (flat top/Picatinny) and lower receiver assemblies, a telescopic butt, fold-down iron sights and 12.5 and 16” barrel options. Features are full AR with a functioning forward assist, ejection port cover and case deflector, plus they will accept most standard and mil-spec parts and accessories.

On offer are the M4-22 Classic with a 4-way, Picatinny forend, the Elite Tactical with a 12”, M-Lok free-float forend and the new Pro with a 9”, polymer M-Lok tube. This last is what the importers Shooting Supplies sent me, which features a few upgrades, as well as a change in magazine capacity. I was sent a 16” but was later told it will be the 12.5” version will be first into the UK and will be at the British Shooting Show, the 16” will be later in the summer. I used it for the article, which was already written and designed, but have included a picture of the shorty, which I feel will be the most popular.

One thing you have to appreciate with these US .22 ARs, is the fact that they are seen as a lot more than fun guns as we might in the UK. The popularity of the centrefire AR and the rising cost of 223 Rem/5.56x45 ammo makes a 22 Long Rifle version a costeffective and practical cross trainer, given it mimics the real thing 100%, which the Tippmann series certainly does.

The build goes for a flat-topped Picatinny upper, so optical mounting is not an issue, this rail is continued on to the forend too. Tippmann fit fold down/flip-up iron sights similar to the Magpul MBUS units, which will get you going from the box and also are a discipline well worth learning and becoming familiar with; although these days, optics seem to be the preferred choice. The lower controls are standard with the safety catch positioned on the L/H side above the trigger, with the combined manual bolt release and an automatic, magazine-actuated hold open on the last round.

The magazine release button is on the right at the rear of the mag well and in easy reach of the trigger finger. All controls are standard; so, if you want ambidextrous and extended functionality etc. it’s available from many different after-market sources. On the right side upper we have a forward assist, which allows you to close the bolt on a ‘short’ round (not fully chambered), which I always reckon is a nice feature on a 22 AR. In front of that is the case deflector, which makes shooting left handed not a problem, finally an ejection port cover that automatically opens as the bolt cycles. Operation is by the standard, rear-mounted T-handle.

The butt follows the common, Rock River Arms style with an angled shoulder plate and five-position adjustment. It’s a workmanlike design but there are better and more expensive units available, if you want to go the after-market route. This being an M4-type, I’d stick with it just for the look and feel of the thing, as it works. Where the buffer tube meets the rear of the receiver, there’s an ambi sling loop if you fancy a single point attachment. The most noticeable change is the switch to what Tippmann calls their GEN 2 pistol grip, which is fuller, more upright and features a filled in back strap for an improved hand/trigger finger position, it’s better than the original A2-type I used on the Elite. The 9” forend with Picatinny rail at 12 O’clock is polymer, as opposed to the alloy version of the Elite Tactical and the same length in either the 16 and 12.5” barrel options. Slimmer and smooth sided, its octagonal section is easier and more comfortable to hold, and acceptably rigid. It also allows you to add M-Lok adaptors such as a Harris bipod stud, hand stops, forward grips and light/laser bases as required. The medium-weight barrel is made from 4150 steel and, given the calibre, is a rigid and stable tube and is threaded ½ x 28 UNEF at the muzzle and comes with a standard, AR15-type, slotted flash hider.

Tippmann have re-thought the bolt on the M4-22 series when compared to the many pre-packaged types with included return spring. It’s a solid design that runs in a ring inside the receiver and takes its power from a spring inside the buffer tube. Unlike the original, it’s now nickel-platted for added reliability. Its forward assist function is actuated by small vertical slots cut on the right side of its body, that the plunger engages with when operated. The trigger offers a very standard, 2-stage, quoted 4.5 lb pull, which was surprisingly good, again compared to some ARs.

Magazines are a little different and do tend to split opinions. Visually, they look like a standard 30-round AR mag and made of plastic, closer inspection shows the outer body is easily removed to reveal the feed system inside, which uses slotted sides and pull down buttons for ease of filling. The outer body offers two functions, first it protects the contents and secondly offers that all important AR feel and look, remember what I said about cross training!

The feed lips are low and feature a U-shaped steel insert, with the bolt hold open actuating lug at the rear of the body, similar to what Smith & Wesson does but much better protected.
Tippmann have also done something about capacity too, as the originals were 20-rounders, which they have now upped to 25, although physically they are the same size. When the inner is removed, the way to tell the difference is the 20 had a round, pull-down button, whereas the new 25 has two slotted thumb lugs. Regardless of payload, I found them easy and positive to fill, with the angled integral guide allowing positive (one behind the other) stacking of the case rim, so reducing the risk of overlapping that causes stoppages.

For accuracy testing, I used a Hawke 1-6x24 Endurance 30 with Tactical Dot reticle in a one-piece Warne, Picatinny base. This is a sweet little scope that very much lends itself to the practical and Action needs of both 22 rimfire semi-autos and centrefire AR15s. I also added a ½ x 28 UNEF moddy. Ammo went to Hornady LR 40-grain round nose, CCI Mini-Mag, 40-grain round nose (plated) HV, Remington 22 Golden Bullet 40-grain, plated round nose HV and Winchester MAX 42-grain hollow point sub-sonic.

Reliability is paramount with any 22 semi and the Pro liked the Hornady, CCI and Remington’s but was a bit spotty with the Winchester MAX. Unusual as the extra weight of its 42-grain bullet tends to suit semi-autos well; I tried some standard 40-grain subs and the action would not function at all. Feed-wise, that was the only issue I had, as it cycled and fed 100% with the three compatible loads. Accuracy really surprised me too, as it was easily shooting ½” at 50 yards and 1” at 100, quite a feat for a semi-auto and I reckon that barrel must be a bit of alright! The slower Hornady LR 40-grain had the edge here over the faster Remington and CCI loads, but I guess that most people will opt for the HV loadings. Me, I’d stick with the standard velocity, as I’ve always found them to be better all-round.

In the hands, the Pro felt good and the advantages of the GEN 2 pistol grip was immediate. The trigger pull though eminently 2-stage and not that subtle, went to around 4 lbs with a bit of graunch in the take up stage, but overall was very useable. The case deflector did its job, as did the standard T-handle. The forwards assist was a little disappointing, as it does not function until the bolt is about 1/8” from closure. Quite often a short round will stop the action well before that. Given Tippmann have re-vamped the design with an improved pistol grip and chromed bolt etc. it would not have taken much to cut a few extra slots in the side to facilitate operation! Also, I’d like the option of a short/10-round magazine, which would be better for hunting with.

This may sound daft, but I did not warm to the Elite Tactical, but I certainly did to the Pro, even though they are very similar rifles, it may be down to the improvements of the latter.