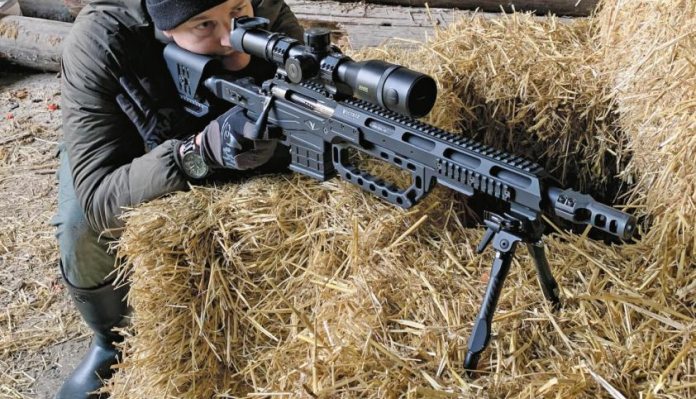 A few years back, I was at the IWA show in Germany and I was drawn to some rifles from Victrix Armaments. From their factory in Italy, they produce a range of sporting, competition and tactical offerings, however it was the Pugio, from their Minerva Tactical line that grabbed my attention. Aimed at law enforcement, it is a compact .308, in an eye-catching chassis, ideal for use in an urban environment; or in the hands of civvies, target use and bashing steel plates. Importers/distributors GMK LTD recently gave me the chance to try one, and I jumped at the opportunity.

Except for the barrels, they manufacture everything in house, including the hard black anodised CNC machined, Fully Modular Rifle Chassis (FMRC). Designed to allow the user to customise it depending on their needs, it includes a ventilated octagonal elliptic forend, that offers flat surfaces at 12, 3, 6 and 9 O’clock, with numerous threaded holes for sections of Picatinny rail. They also offer the option for a KeyMod variant.

My tester came with a 20 MOA, twopiece, Picatinny top rail and scope base combination in the 12 O’clock position. The 3 and 9 O’clock sections included a 11cm Pic rail up front while the 6 O’clock accommodated a 3cm length for a bipod and a 6cm one a couple of inches behind. All showed numerical markings, so that the user can attach equipment in the same place each time; a nice touch.

Out of the ordinary, is the large multifunction handle, which is positioned in front of the magazine well. It included three quick-detach (QD) points for a sling and a threaded 1/4-20 UNC hole for a tripod adaptor. It also includes a hook that can be used in conjunction with a rope to provide support while shooting out of a helicopter! Probably won’t need that at Bisley then! The AR15-style pistol grip was the excellent ERGO flat top handle, which I have on both my chassis rifles.

The Arrow 03 multi-adjustable butt stock is connected to the main chassis body via a buffer tube assembly, which shows markings from 1-13cm. The design includes a hinge, so that it can be folded to the left-hand side, reducing overall length to around 28”. The mechanism is controlled via a pair of push-pull tabs on the right hand side. I found that in use, I would have to rest the rifle on the bipod, as one hand is required to disengage and hold the spring loaded catch open, while the other is used to fold the stock. Minor niggle, but not ideal. The butt comprises of two main sections; the first, is a large clamp that can be moved along the buffer tube. It provides some length of pull (LOP) adjustment, and also incorporates the adjustable cheek piece, so its position can be altered as well. The comb itself is metal but has a nice matt black rubberised coating. It requires a hex key to adjust and provides 4cm of vertical movement, marked in 0.5cm increments.

The second section adds further LOP adjustment by attaching to the first via a line of eight holes marked at 1cm intervals. Two hex screws are used to secure it at the chosen length. I found a QD point on each side and one underneath plus two additional threaded holes. There was a 3cm length of Picatinny rail at the base of the butt, for a monopod. At the rear, is a vertically adjustable butt pad, showing markings from 1-7cm in 0.5cm increments. Controlled via a locking thumbwheel, the total adjustment range was 6.5cm.

The Pugio is only available in .308, as this calibre offers the best performance from its short barrel. It has a 1:10 twist rate, making it suitable for heaver, higher BC projectiles, to maximise effective range and terminal performance. It is a fully floated, 16” match grade 416R lapped tube, showing a heavy 24mm diameter profile. It was threaded M18x1 and includes a detachable threechamber muzzle brake to tame recoil. The Minerva Tactical line also includes the Gladius TGT in .308, .260 Rem and 6.5 Creedmoor. The long action Scorpio TGT comes in .300 Win Mag, .300 Norma Magnum and .338 Lap Mag.

The exceptionally smooth short action is manufactured from Aisi 630, a high grade stainless steel, and along with the bolt, is finished with a Physical Vapor Deposition (PVD) coating. This is an expensive, very thin, hard, durable and wear-resistant finish, offering superior longevity over other compounds. Victrix have put their own spin on the 3-lug, fluted and ventilated bolt, making the lugs asymmetric by positioning them at 105, 105, and 150° instead of the usual 120, 120, 120° spacing. This is in an effort to improve harmonics, reduce flexing and optimise feed from the magazine. It offers a 60° bolt lift and has a 7cm long shaft with a knurled 19mm diameter handle, providing great leverage and smooth operation. The bolt face shows a large extractor and a single sprung ejector, which worked very well in operation. The release button is located at the rear/left of the action.

The safety catch is positioned to the right of the bolt shroud, which includes the red dot that denotes fire. It is a two-position lever, with Forward – for FIRE and rear – for SAFE. I was surprised that a rifle of this type/origin did not include the ability to lock the bolt, which can be a desirable feature. There is a large cocked action indicator at the rear of the shroud, which protrudes, displaying a bright red ring. The excellent trigger is described as a selectable single/two-stage design with my tester setup with the latter. In addition, it offers adjustable pull-weight once removed from the chassis, and the blade position can be adjusted, forwards or backwards. It sits in a well-proportioned, guard offering plenty of access for a gloved finger.

The 5-round, single-column, detachable polymer magazine is a clone of the proven Modular Driven Technologies (MDT) AICS compatible mag, so larger capacity ones are available elsewhere, which is a bonus. It offered reliable, smooth feeding and can be removed via the spring loaded tab positioned out of the way, at the rear of the well.

For testing, I opted to keep the muzzle brake on, as I was keen to find out how effective it was. I fitted a Tier One tactical bipod for support and used a set of their Tac rings with internal bubble level to attach my Bushnell DMR 3.5-21x50. All, with the intention of maximising the rifle’s performance during testing. GMK Ltd sent me a selection of ammunition, which included; Sako TRG Precision 175-grain, Super Hammerhead Match (SH) 150-grain, Gamehead (GH) 123-grain and some of the new Federal 110-grain.

Seeing as the rifle weighs well north of 12 lbs and I would be shooting from a bench, my expectations of performance were high. I started with the 175-grain TRG Match ammo, and it quickly set a benchmark with a 0.25”, 5-shot group at 110 yards! Box figures showed a muzzle velocity (MV) of 2620 fps and energy of 2667 ft/lbs. The 16” tube on the Pugio produced 2527fps/2482 ft/lbs (see ammo table). The ballistic program Strelok calculated the bullet would almost reach 1000 yards before going transonic, which is pretty good! The heavy rounds should also help to produce a decent splash at that distance if shooting at steel, which is always helpful for corrections. As I moved down the weights, the group sizes started to open up, with all but the 110-grain Federal staying well below 1-MOA. A clear indicator that the 1:10 twist suits the heavier projectiles, meeting the requirements of the target audience.

In a change of tack, I took the rifle to an Electric Target Range (ETR) so that I could try shooting some rapid, longer shot-strings at various distances. The heavy barrel dealt with the fast-paced shoot very well, by staying accurate, cool, and producing minimal heat-haze, while showing no discernible point of impact shift either.

The action and trigger were both a triumph, their reliability and precision feel made the rifle thoroughly enjoyable to shoot. The changes Victrix have made to the bolt design have clearly had a positive impact. All of this combined with the extremely effective muzzle brake, meant it was a force to be reckoned with! Overall, this rifle comes across as having been built with real Italian passion. The attention to detail is excellent, with very high quality fit and finish, complimented by maximum adjustability which suited my 6ft 6 frame to a tee. However, all of this comes at a cost, the RRP is £6145. This makes it expensive compared to the competition, but it is exotic, includes some great engineering and is compact, making it seriously desirable!