Walther G22 - Blast from the Past 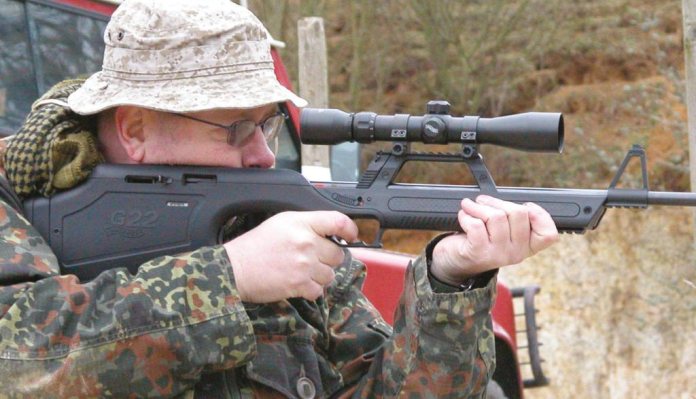 There’s little doubt that it was we British that envisioned the Bullpup rifle concept, and we nearly adopted one in the late 1950s as our service rifle, but were blocked by the Americans, but that’s another story. The layout of what is essentially a butt-less design, sees the action acting as the butt, so losing about 12” of length, from a conventional build. This allows for a longer barrel in a shorter package, the consequences being the magazine sits to the rear and the pistol grip is moved forward to the middle. This has to a degree filtered through to the sporting market and I can remember a Ruger 10/22 semi-auto in an aftermarket BP stock.

Looking through my library, I found a picture of a younger me shooting one of the only purpose made Bullpups; the Walther G22, so, here’s the story. The build shows an all-polymer body and a thumbhole (T/H) stock in black or green, with a massive cut-out. There’s an integral, M16-type carry handle with Picatinny base and rudimentary iron sights at the rear, these consists of a sliding block that supports a rotary U-notch plate that you dial to raise or lower the point of impact. Up front on the barrel is an A-frame with a windage-adjustable blade and a short section of Pic rail underneath. With another longer one under the front of the forend. The well-shaped pistol grip is dimpled and shows ambidextrous trigger finger shelves, along with a large, angular front strap. The sides of the forend show rubber gripping panels too.

Ambi if you dare

The G22 offered a number of unique features, as the blocky, butt/receiver section with its high, integral comb carries 2 x 10-round, steel magazines in tandem.

The front one sits in the feed well and the rear is a spare positioned behind it. The release catch takes the form of a press in lug at the rear of the thumbhole cut out, the empty will free fall, so you need to catch it on the way out. The rear is a simple friction fit in its housing. Mag changes are slick, as with practice it’s easy to drop the empty then reach back with your supporting hand and do a fastish reload.

Exceptionally clever, if not downright practical is the fact the rifle is rigged for 100% both right and left-handed operator use. It’s not ambidextrous, as the components have to be swapped around, but you can remove the bolt and take out two blanking plates on the other side to open up the slot for the re-positioned cocking handle and ejection port. As I recall, Walther says this is a gunsmith’s job, as you also have to refit the ejector and maybe even the extractor. When it first appeared, there were some issue with owners doing it themselves and having some serious problems; one I believe was forgetting the change the ejector over, so the fired case hit the blocked off port, with disastrous consequences.

In keeping with the ability to switch from left to right hand operation, the safety was ambidextrous and consisted of curved, sliding plates above the trigger. It offered three positions: rear FIRE (red dot exposed) forward SAFE (white dot exposed and a locking option. In SAFE mode, there’s a cut out in the catch and a transverse plunger is pushed through to lock it in place. Yet another indicator was a set of red lugs that protruded above the rear of the FIRE marking to show the gun’s state.

The standard barrel length was 20”; which makes for a very short rifle, the UK version had a 24” tube for obvious reasons. Barrels came threaded at 14x1mm; Walther also supplied a slide-on tube to give a bull barrel effect and an optional accessory was their muzzle-mounted, SD22 moderator, along with some branded optics, lights and I think lasers. The trigger pull is long and mushy, as it uses a linkage and there’s not a lot you can do about it. It appears that Walther spent a lot of time and money in getting the gun right, but rather neglected the trigger and to get it out there their high ups decided what they had would be adequate. It was not and showed the typical Bullpup heavy, mushy and long pull, which was not conducive to accuracy potential.

This was without doubt a radical design for its time and the G22 went down like a storm in the US, but less so in the UK. Compared to the emergent AR rimfires and similar, the magazine capacity was too low to compete in the sorts of competition that were coming online. It was also a nightmare to strip and typically needed to be cleaned regularly for reliability. It would have made a great truck gun for rabbits, due to is short length and sweet handling.

In use, the sight line is high, although it points and handles instinctively. The comb offers good head support, although I never considered the rear scope base that rigid, which doubtless did it no favours. With the right ammo it ran pretty well, given the usual 22 LR caveats of variable powder charges. It had an automatic, last round hold open, so dumping the mag and slapping in a new one was easy. However, there was no bolt release, so you had to yank back on the cocking handle to chamber the first round, which and given it was right by your ear, took some getting used to.

I have not seen a G22 offered for sale for many a year, but Gun Trader is showing one with a moddy for the princely sum of £250, I think in the day they were around £500/660. As a design, 22 rimfire Bullpups are very rare, although you may recall the British-designed Sawfly, which I tested in prototype; well, that has moved on from stage two to possibly stage three, so we might see something on 2020 - never say die!