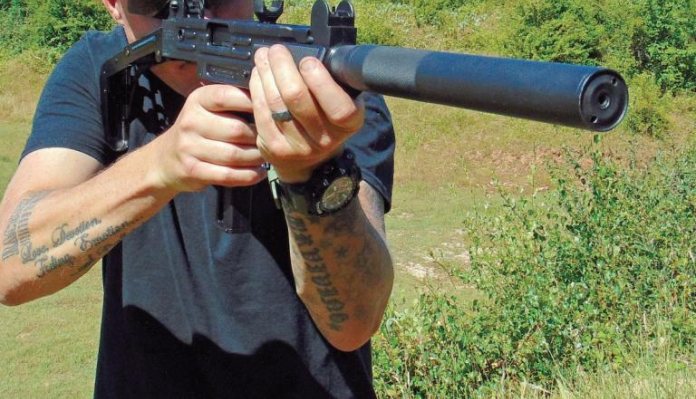 So, I picked myself up a little bargain when I was browsing the racks at my local gun shop. I used to love these things when they first came out a few years ago and I was really tempted at the time, but what with a new born, my spare cash was spent on Pampers and formula!

What we have here is the Umarex/ Walther Uzi in .22 long rifle. It is a semi-auto with a 22-round magazine and serious fun to shoot! Now, everything on this gun works just like the real 9mm version! First, this thing weighs a ton for its size at 7.5 lbs! It’s all metal, apart from the pistol grip and the forend plastic scales. The one I have had quite a bit of use and a few little dinks, but I think that just makes it look even cooler!

The butt folds and is not the most comfortable, but it’s correct. The all-metal receiver feels solid and has all the licensed markings on either side. The pistol grip is made from polymer and has a fully functional grip safety at the rear. In use, you make your firing hand grip, which automatically disengages this primary safety feature. The main safety is located on the left of the grip and easily operated by the thumb; if you’re right handed! The sliding catch pushes forward from S (safe) to F (fire). Below on the mouth of the mag well is the push button magazine release. Made from polymer, they have a pull down, load-assist button to help you fill up. This gun only came with the one and someone later told me that spares might be as rare as rocking horse manure- great! Looking around the web is probably the best bet and here are two examples of what I found; ITL Shooting Supplies here in the UK is offering the 22-round clip at £40; www. itlshootingsupplies.co.uk and 10-rounders from www.shop.waltherarms.com in the USA at $38 apiece.

The trigger is, well, as expected on a gun like this, terrible! But again, on something like this, it doesn’t really matter. The iron sights are not bad; at the rear, you have a double aperture L-flip-type, like the original AR15. Which offers two range settings and the ability to adjust windage. Up front, is a rotary post for elevation correction; again, in protective wings. The non-reciprocating cocking handle is cut away in the middle, so as not to block the sight line. It’s hard not to miss the big, dummy can, that shrouds the annoyingly, skinny 16” barrel. This has been done to allow the rifle to conform to UK law, as it must be a minimum of 24” long and much like an LBP, the only way to do it is to increase the barrel length. I suppose that if the butt was permanently fixed open, you could get the barrel cut down a bit?

Strip and get dirty!

Now, once I got this gun home, I couldn’t wait to give it a good clean up and get it in bits! And trust me, it needed a de-gunk! It’s just a case of taking off the top of the receiver where the charging handle is. Firstly, leave the empty magazine in the gun and pull the charging handle back, so that the bolt is locked open. There’s a button just in front of the rear sight on the top of the receiver, once pressed, the whole top section between the front and rear sights comes off, including the charging handle. When you look inside, you realise how simple it all is! And in this case, how dirty!

Now pull out the bolt, spring and guide rod, all of which comes out easily. Remove the polymer bolt cover and then just pull the bolt slightly back and lift out. What’s then visible is the top of the trigger mechanism and the breach, which is nice and easy to get at to clean up. This one of mine needed a right good scrub out with an old tooth brush. Once I had finally de-coked inside, I then applied some Cleansoil here and there, basically anywhere where parts move, along with a pull through of the bore and that was that.

As for the internals, the guide rod and spring just comes away from the bolt, take the spring off and a good clean with a cloth and a few drops of oil and it’s like new! Then, drop it back into the receiver. It will only go in one way, so nothing too fiddly or complicated. Put the polymer cover back on, then the top of the receiver just clicks back into place and that’s it. Literally 15 minutes had transformed this well used Umarex Uzi into something that feels so much silkier to cock.

Now for the good part! Range time! I loaded up the magazine with 22 rounds of CCI MiniMag and gave one of my eight inch gongs ‘what for’ at 25 yards! That then resulted in one big grin on my face! After several mags and no issues and not much paint left on the gong, I was a happy chap.

I’ve not yet tried it with the stock folded, I’ll save that for another day! All in all, a nice little plinker; OK, not in production anymore but doubtless available from many secondhand racks. So, have a poke around and you might be surprised to see what you might find and at silly money too.