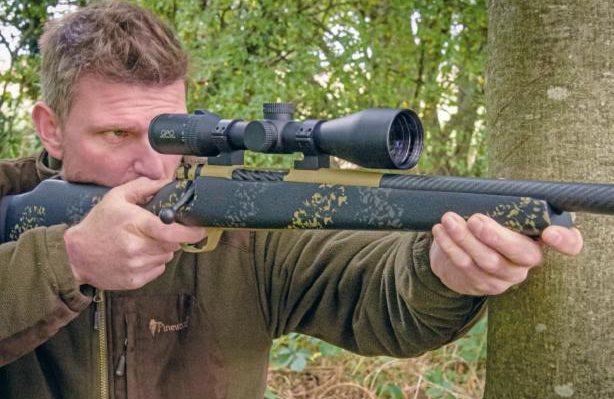 Weatherby’s Mark V Carbonmark has a striking wrapped barrel with contrasting Cerakoted elements. There’s a 5/8”x24 muzzle thread tipping the inner 416 stainless and machine fluted barrel hidden under the skin, plus a coyote brake is supplied. The 23.6mm chunky barrel is well-proportioned in length for a hunting rifle at 22”. It’s parted by 435mm of carbon fibre between tenon and muzzle. The stainlesssteel barrel liner is tensioned, unlike simpler carbon wrapped offerings, with just a 5% contact interface between materials, allowing 95% free space for cleaner separation of thermal expansion effects between the two materials. This also reduces the intrinsic thermal insulation of the carbon/epoxy in direct contact with the steel you want to cool.

A 6-lug bolt with push feed delivers a precisely specified 54º bolt handle lift to cock on opening. The receiver, Accubrake ST and trigger guard all share the Coyote tan Cerakote, contrasting the Graphite black of the bolt and bolt knob. These combine with the stock’s grey and similar tan finish for an integrated, homogenous looking gun, enabling distinctive first impressions.

Trigger pulls are immediately crisp with slick bolt operation throughout its 100mm travel. The 17.6mm shaft is spiral fluted, with a well-proportioned handle showing a spherical tip. The shroud’s right side safety catch provides forward for FIRE and rear for SAFE (with bolt lock).

The Trigger Tech unit is a fine device and is weight adjustable, with clear instructions laser engraved.

There’s not a hint of threadlock on the aluminium/steel machined components. The breaking weight was set at 1150-grams and the spacious trigger guard allows gloved fingers to approach with delicacy.

The stock’s ambidextrous, open radius pistol grip shows an approximate 70mm reach onto the blade. The pad of my index finger sat just right on the smooth curved blade, with about 3mm overtravel after firing.

Weatherby uses a floorplate magazine system and it accepts 5 rounds, plus one in the chamber. Single rounds dropped into the ejection port will also feed directly into the chamber for backup shots. A Sako-style recessed extractor claw sits to the right side of the 0.473”/308 bolt face, which shows more delicacy in position with slimline lugs surrounding it, rather than raceways to run along like a twin lug bolt. Primary extraction was forceful, offering minimal effort to dislodge the fired case. Secondary ejection from the sprung plunger ejector was plentiful, regardless of operating speed. With a silent safety catch, no issues affected the refined, subtle character of a high-level, multilug bolt gun, rather than just a regular twin lug 90º action. You can appreciate the ease with which rounds are picked up and fed to the chamber from the mag and the inherently smooth bolt transit from Cerakoted surfaces. Also, I’m a fan of floorplate mags on hunting rifles, you can’t lose them! A lever within the trigger guard allows the floor plate to drop free and discharge unused ammo into your hand as the plate opens.

It has ‘the look’

The front screw anchors to the recoil lug itself, while the rear shroud features an extended lug drooping from the action. This locates into a socket in the inlet of the composite, glass fibre stock, which shows a multi-tone black/coyote finish with tactile stippling on the matte finish throughout. Additional grip is supplied by the trapezoidal shape of the freefloating and stiff forend, which assures space for fingers to get hold of the gun in most shooting positions, without interfering with barrel harmonics.

With a central balance point, the light stock is key to not overwhelming the light weight of the cantilevered balance of a carbon barrel. Weatherby has done a good job here, although fundamentally lightweight overall, it remains pointable and stable on target, without feeling too floaty. It gives a linear recoil feel with or without muzzle accessories. The Creedmoor is a soft shooter though, so some of the big Weatherby calibres would no doubt be a far more intensive experience.

This gun is refined throughout. The Monte Carlo comb offers good scope alignment, with a slender comb that fits nicely under the cheekbone, so no jaw displacement and not too low below the bolt/bore axis. However, the length of pull is very short at just 13.125” with a 1” thick recoil pad. The pad grips your shoulder pocket well, but the gun feels small compared to European counterparts. This will suit some shooters and does mean you never feel a long reach to the bolt handle when shooting fast, standing or prone, but Weatherby doesn’t seem to mention any available spacers. In fairness, the proportions make the grip also comparatively small compared to general German, Scandinavian or Czech counterparts. Fit and finish is all excellent, with no untoward harmonic issues from the stock while firing or handling etc.

I was supplied with some 120-grain, Barnes Vor-Tx ammunition that the gun was already zeroed with, plus Talley mounts and a GPO scope. A 3-shot, sub–M.O.A group is promised by Weatherby when paired to premium ammo such as this. I would normally use a wider selection of conventional lead and non-toxic ammo with a review rifle but wanted to run this one exactly as suggested/supplied, so the first three shots were critically set up with care and attention to getting it right the first time from a cold bore. I’m happy to say the promises from Weatherby and Raytrade were achieved. I had a 3-round group of exactly 24mm, C-T-C, with a mean point of impact 25mm/1” high at 100m - a logical step for a stalking rifle (as it had been set up to be used).

My main concern with any carbon barrel is the stability as the temperature increases when fired for longer strings. I fired 12-rounds sequentially for additional groups of 28, 31, 22 and 30mm, to accumulate a 15-shot average of 27mm. I generally find copper ammo fussier than jacketed lead, with fewer choices, so to achieve the goal with such assurance, and with the magic MOA equalling 29.1mm at 100m, I was satisfied with Weatherby’s guarantee. I’m very sure this would have been further improved upon with copper jacketed, lead hunting and/or match ammo, as thousands of rounds through my hands have proven they almost always outperform copper on paper in most guns. The chronographed muzzle velocity of 2897 FPS (2910 FPS on the box) meant 2237 ft-lbs of energy, which is perfectly satisfactory for UK hunting needs.

Weatherby’s action shows a flat underside around the integral recoil lug machined as part of the receiver. Bedding compound has been added to improve the fit of the action and although minor, has a beneficial effect wherever done correctly. Releasing tension from the front action screw saw no rise of the barrel from the forend’s tip. I was happy with the layout and standards at this price point. Everything felt snug and although flat screw heads rather than Allen or Torx, the action screws tensioned smoothly with a definite ‘stop’ as the action was seated. There was no spongy squeeze into position to indicate inlet compression.

The Carbonmark seems more of a true Weatherby to me than the Vanguard was. It carries that tougher charm so beloved by the brand’s fans, with attention paid to detail. Small features like the safety catch on the bolt shroud to lock the firing pin are appreciated and it’s certainly true the 6-lug bolt offers a short lift and is scaled to cartridge length correctly. I like details such as the scallop at the front of the receiver opening, minimising the chance of any bullet meplat damage as you load through the top. In the rare event of a primer rupture or worse, there are multiple gas escape vents on the bolt and I’m glad Weatherby didn’t change what works and adds safety with no detrimental effect on otherwise modern fluting and Cerakoting to improve functionality.

For those unfamiliar Roy Weatherby was a serious ballistic innovator and liked to push what was possible for flatter trajectories and more power, long before laser rangefinders were common tools. This rifle contrasts to the MeatEater and other than a longer length of pull being made available by removable recoil pad spacers, I really can’t criticise it for what it advertises. I would have loved to test more ammunition as the carbon barrel was the finest I have used. It easily maintained point of impact for hunting accuracy shots for 15 or more rounds, whereas some carbon tubes struggle at 5. The Weatherby/BSF (barrel maker) assurance of only 5% contact between carbon and steel pays off and going by muzzle temperature, where you can actually feel the steel (even if Cerakoted which also conceals heat a little), the barrel does appear to cool more quickly without thermal drift issues.

A left-hander is available but sadly calibres seem to favour Roy Weatherby’s hard and fast big hitters, which makes ammunition supply tougher, not even a .308 or .30-06 is listed.