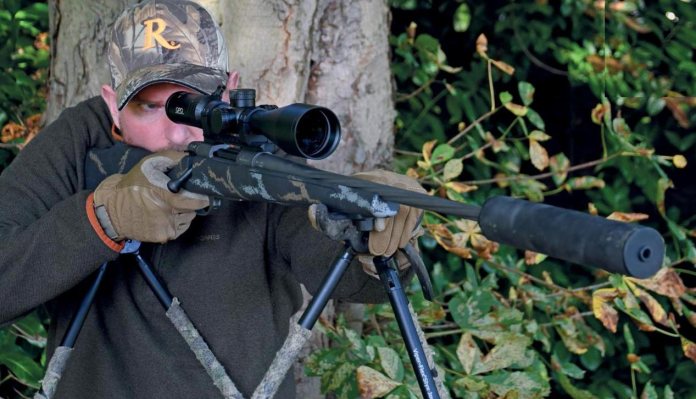 Roy Weatherby was first known as the creator of extreme high-speed/ energy cartridges as well as the design and manufacture of multi-lug, super-strong actions to accommodate their size, pressure and speed with characteristic double-radius shoulders on the brass. The newer line of MeatEater rifles are named to tie in with popular TV hunting shows and are somewhat more modest in comparison. Although technically manufactured by Howa, along the lines of the commonly seen 1500 action, they have detailing separating them from the Howa ethos. The MeatEater returns more towards the Weatherby hunting culture with mountain and plains rifles, modest weight and of course, the option of fire breathing monster calibres for large game.

The Tungsten Cerakoting is the first obvious detail and it fends off inclement weather and even just the corrosive effects of your own fingerprints. It looks superb, with an exceptionally slick application matched to the looks of the spiral fluted barrel.

My test rifle came in .243 Win and the 24” barrel helps retain velocity, this calibre is a perfect example of a ‘speed’ rather than bullet diameter/weight cartridge. The muzzle is threaded ½” x 28 TPI for a moderator and a Picatinny rail was supplied fastened with four Torx screws (Remington 700 long action compatible).

The MeatEater isn’t a multi lug action, it’s a straightforward two lug, push feed unit with plunger ejector, claw extractor and 90º bolt lift to unlock, cock and cycle the action. Black Cerakoting continues along the fluted bolt shaft, giving a slicker feel than bare, bright polished steel. The stroke length is 102mm and the 55mm handle is capped by a knurled 18mm teardrop tip. Tungsten Cerakote reappears on the bolt shroud, which includes a tactile and visible cocked action indicator.

There is a 3-position safety catch on the right side (forward for FIRE, middle for SAFE with bolt operation and rearward for SAFE with the bolt locked) and a bolt release catch on the left. The trigger safety, like the rest of the trigger unit, is identical to the Howa HACT unit. It offers crisp and adjustable 2-stage pulls that are easily timed and reliable in use. The vertical serrations on the blade offer a tactile feel, which coupled to a 970-gram breaking weight and spacious trigger guard, identify the rifle as a seriously capable hunting tool.

Ammunition feed is from a floorplate magazine system, which is simple, effective and impossible to lose, plus it’s easily loaded through the 70mm open span in between the front and rear action bridges. A button on the front of the guard discharges the floorplate’s 5-round contents into your waiting palm. The contrasting, black, laser engraved ‘MeatEater’ logo appears reasonably modest against the tungsten Cerakoted bottom metal, trigger guard and even the T30 Torx action screws. Weatherby suggest precise torque application to these screws for the pressure bedding to work correctly at 35 in/lbs, and I found this an important factor to adhere to. The #2 contour barrel tapers from 15.2mm to the 39mm action and Raytrade supplied an Evolve moderator to complement the rifle perfectly, without excessive mass for the barrel to support.

Pressure bedding essentially means that rather than a free float, the barrel is in contact to some extent with the stock. The action still shows a chunky recoil lug to transfer force from metal to polymer and you can see the bedding stress applied as the screws are tightened and the action meets its inlet with the suggested torque. If you are excessive it’s even more obvious, as effectively, the barrelled action and stock, with varying levels of stiffness, draw towards one another. This is a complex topic that polarises opinion. It has some benefits but generally speaking, I only see pressure bedding as a desired factor on light barrels in true sporting rifles meant for low shot volume, light weight and generally large cartridges. Looking through Weatherby’s calibre option list, even though I’m using just the .243, this form follows the facts for the MeatEater. It’s nice to see a slimline hunting rifle where so many are overtly bulky in the hope of attracting interest these days, yet I feel pressure bedding will affect choice by those to whom free ‘floating’ is a strongly desirable factor.

A Spartan bipod was supplied with a pre-installed mount and I found this suited the rifle’s lightweight handling well. Elsewhere on the stock, the grip is quite slim, with an open radius leading toward a tapered underside and the recoil pad. The length of pull (LOP) measured in at 13.5” and this is quite short, but spacers could be added. The .243 cartridge is gentle on the shoulder but if you were to use a larger, magnum round, then you will definitely want it to fit you well for comfort and control. The recoil pad is 22mm thick with a medium texture and it’s just firm enough, without any contrasting soft or hard points and welds securely into your shoulder for grip when repeat firing. A Monte-Carlo cheekpiece is moulded in, raising your head more in line with the scope. However, with a Picatinny rail added, it tends to push scopes unnecessarily high in some situations on sporters, so be aware when selecting mounts.

Weatherby guarantee that the rifle will achieve the general industry standard, 3-round group within MOA at 100 yards, and I tried quite a bit of ammo before getting to the sweet spot. 75-grain Remington Accutip was that ammo, which at 100m gave me great confidence for three shots, but any more than 5 rounds showed the heating slim barrel begin to waver from the assigned point of impact.

I got the torque wrench out after disassembly and reassembly, for photography and to have a tinker with action screw tension. Weatherby’s suggestion of 35 in/lbs (bedded rifles are in the region of 55 in/lbs and I tend to go 5Nm as a metric man) was about right. Some may choose to tune screw torque and it’s true there are rifles that will benefit from it.

Raytrade told me rifles will be supplied at this optimum value. Is it the simple life? Well no. However, for a lightweight rifle, compromises have to be made and creating a stiff enough forend to assure a 100% free-float on a barrel is not always a true advertising statement from many companies and intermittent contact from such a situation is often worse than the pressure bedding route, so bear it in mind.

The performance on paper is more than acceptable, with general shooting trends being soft recoil and an easily operated bolt. The magazine will feed slowly and quietly if needed, similarly with the tactile safety catch. Ergonomically, the raked stock with 25mm drop from comb to heel felt more suited to upright and dynamic shooting positions or from sticks, than prone. Trigger feel was excellent.

Bipod use demonstrated the MeatEater shot better with the cant axis not locked too tight, allowing the gun to react freely to the barrel torque from bullet passage. This is not a long string, long range Varminter but as a foxing rifle or small deer calibre, .243 has few equals in a pointable, fast rifle. For heavier deer, I have witnessed the identical twin to this rifle in 6.5 Creedmoor offering true cloverleaf performance, in what has now become a popular cartridge for broader shooting needs.

This rifle certainly shows interesting features that make it different to the Howa and it certainly looks more refined with tough, well applied Cerakote. The bolt operation is faster and smoother than a Howa because of this coating and I have to say, I like the looks a lot. Weatherby offers dedicated left-handers and the calibre range is certainly varied, as long as you can get ammunition. I just can’t help feeling it’s a shame they haven’t taken their stock design that extra mile, with all that inherent stiffness, and allowed a free float, but the rifle is built for a much larger US market of volume buyers for whom the design is clearly deemed preferable.

Whether this is for modern, mass manufacturing reasons or because ‘Grandpa’s Weatherby’ was made that way, is a better question, because full-length hand bedded barrels/stocks are a far different proposition to mass-produced, factory-made injection mouldings. The European manufacturers clearly chose differently.