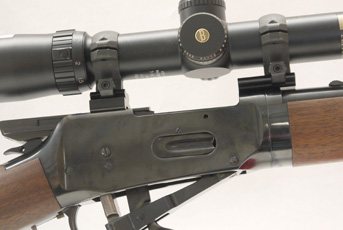 Winchester’s original Model 94 has moved on considerably and now offers a side-ejecting action and more sensibly placed, tang-mounted safety with their new 94AE (Angle Eject) guns. Equally calibre choice has increased with the original 30-30 being out performed by numbers like the 307 and 375 Winchester. New to this is 450 Marlin, which is a 45-70 for the 21st Century, which is now offered in Winchester’s 94 AE Trail’s End Takedown on test.

Hornady developed a revolutionary design specifically for tube magazines - Leverevolution. It uses a pointed bullet with a flexible polymer tip – the FTX, which offers a more ballistically efficient projectile. Before only a flat nose was possible due to the problems of stacking centrefire ammo point to primer. Here recoil could cause the rounds to detonate with impressive results, as the tip of the one below slammed into the primer of the one above, but that’s a thing of the past!

The rifle is a pure hunter or guide gun and notable in a number of areas. The 20” heavy barrel features five ports either side of the front sight. Though no shoulder muncher the 450 Marlin is powerful and this model is light at 6lbs 12oz; do the math! Different too is its take-down facility, designed by John Moses Browning it offers a compact package where space is at a premium like in a plane or ATV.

The build quality is good, the stock is walnut in a flat finish and no chequering with the traditional, straight-hand butt backed up with a Pachmayr®Decelerator®recoil pad. The all-steel barrel and action is nicely blued and shows a forend cap. I would have liked to have seen QD sling studs though.
Sights consist of MARBLE ARMS®front and an adjustable, semi-buckhorn rear unit,standard fare for this model. The top of the receiver is drilled and tapped and the gun came fitted with dedicated 94AE bases and rings with a Bushnell Elite 6500, 1-6.5x24 illuminated scope, and ideal optic for this sort of gun. However, as I discovered this mounting system gives rise to a little problem.

The 94AE action certainly felt more smooth and positive than on earlier models. I like the fact it now uses a tang-mounted safety as opposed to the less practical cross-bolt system. The hammer is a rebound-type and can only contact the tail of the firing pin with the safety off. It does however fall when the trigger is pressed even when the safety is on, not a problem but if you are not expecting it a bit scary!

Loading as with all Winchester tube magazines is through a gate on the right of the action, a bit slow but it means you can top up at any time. Different however is the take-down facility, which as I said is an old JMB design. The barrel and forend lock into the action using an interrupted thread. To take it down flip the lever at the end of the mag tube down, unscrew and pull it free. With the action open twist the forend 90° to the left and pull the barrel out.

All well and good, but a slight problem; the barrel assembly would not turn! I scratched my head on this for a bit then realised the forward scope base sits over the barrel and stops it from turning, meaning it has to be removed! Reversing the base does not help as yes it solves the problem but stops the empty ejecting. Not a fault of the rifle, as the mounts were doubtless aimed at fixed barrel models. You could cut the base to size and then machine a new recoil slot in the remainder.

The overall feel is good and it fills the hand nicely something my old 30-30 Mod 94 never did! I was a bit unsure about recoil and loaded up with 6-rounds of 325-grain FTX Leverevolution ammo. To my pleasure the recoil porting really worked and though not light the kick was not excessive. The Winchester offered a smooth action with no hesitation or stiffness, they have modified the mech slightly with round locking bolt trunnions and an articulated cartridge stop that improves feeding.

Accuracy, well the Leverevolution improves things all round, off the bench at 100 yards the rifle was printing 1.5”; good enough! Hornady quotes 2225 fps/3572 ft/lbs, which the 20” tube of the AE was not capable of, dropping to 2075 fps/3141 ft/lbs, so still respectable. Barrel on and off showed a noticeable shift in zero that required some adjustment, made more obvious by scope use, with iron sights or a barrel-mounted optic it would make less difference!

Overall a nice rifle in terms of build quality, finish and accuracy potential with the take-down facilty and calibre of value to some.

FOR
A quality big bore repeater