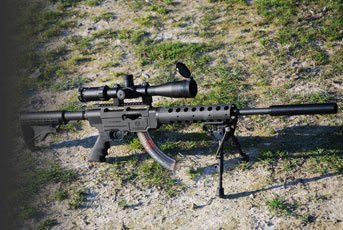 Love it or hate it you can’t fail to acknowledge the Ruger 10/22. First produced in 1964, 46-years later it’s still going strong with new models appearing on a regular basis. The last time I checked it out it was the Hogue-stocked, 16” heavy barrelled Target Tactical. Now I have the AR15-like SR22.

This is a case of the ‘wheel turning full circle’ as Ruger have simply let someone else do most of the work. The SR22 consists of the 10/22 medium weight barrelled action mated to a Nordic Components exoskeleton to give the AR15 look. This is not a new idea as it has been offered as an upgrade kit for a few years. Parallel to this Remington have dressed up their 597 VTR in a similar fashion, a rifle I looked at not long ago.

The build totally encloses the receiver apart from the ejection port and mag well and consists of four major assemblies – butt, pistol grip & lower action, upper action complete with integral Picatinny rail (which screws direct to the existing scope base holes in the 10/22 receiver), forend adaptor/coupler and free-float forend tube. All bolt together, with the action as before being held by a single screw at the front of the mag well.

Furniture consists of a fixed-length CAR15-type butt and a Hogue rubber, over-moulded AR15 pistol grip with trigger guard filler block. The ventilated forend is aluminium and Ruger offers a set of Picatinny rails that screw on and allow the fitting of accessories such as torches, lasers and fore grips. As standard there’s a QD sling stud up front and a swivel in the butt.

Curious is the non-adjustable butt. I was told this is how Ruger has to ship them for overseas sales due to US State Department requirements. Inspection showed that a small roll pin in a blind hole holds the butt in place and the locking catch is inoperative. Plus I believe the butt is also glued to the buffer tube. So cosmetically you have the CAR15 look, but in reality it’s a fixed unit; pity as this is a useful feature.

The barrel on my test gun shows a 16”, medium weight build and is threaded ½ x 20” UNF for a moderator. A non-screw-cut version is optional, which knocks off £32, but I prefer the former as I imagine would others. On first glance the tube looked bent upwards. Closer inspection showed a plastic block inside the forend that bears up on the bottom to apply tension; I thought this strange on a supposedly free-float design!

Apart from that it’s a new version 10/22 with the polymer trigger mechanism housing (TMH) and extended mag catch as standard. It comes with a single, flush fit, 10-round rotary magazine, but will accept all the usual, hi-cap units, like the Butler Creek 25-round banana clip or the new Black Dog 50-shot drum etc.

For those of you not familiar with the 10/22 layout let me explain; the cocking handle is on the right and fixed to the bolt and reciprocates with it. On the SR22 which has thicker outer walls due to the external receiver build it could do with being longer. The safety catch is a cross-bolt integral to the front of the trigger guard and pushes right to left for FIRE and reverse for SAFE. Just ahead of this is the manual hold open catch, which can be a bit fiddly to operate. Unlike Remington’s VTR, Ruger has never incorporated an automatic last round hold open facility, which I think is an oversight!

To the rear of the magazine well is the release catch, which now consists of a lever as opposed to the older, flush-fit, push-up plate; which is a vast improvement. The trigger shows a wide/grooved blade, with plenty of meat for the finger to get on to. However, the break is a bit heavy and long at a graunchy 6lbs. Ok you can live with it, but I’m surprised Ruger did not offer something better, given the potential of the SR22.

Like the Remington 597 VTR; Ruger point out the SR22 gives an AR15-type look and handling, but not control functions. This fact must be weighed in any decision to buy one, as there are differences between it and a 22 AR. For the test I used a cross section of sub-sonic, standard, high and hi-velocity ammunition from SK and Lapua. A Harris BRS bipod went up front along with an A-TEC CMM rimfire can from Jackson Rifles. I mounted up one of the new Hawke 4.5-14x42 TAC 30 scopes from Deben and there’s little doubt it’s a good looking package…

The SR22 proved a bit ammo and feed fussy and was not keen on the sub-sonics, which is something I have never found on a 10/22 before. With standard and hi-velocity it ran OK-ish. Accuracy was not bad, but not as good as I would have imagined as at 50-yards it was printing ¾-1”, for this sort of build I would expect ½” with quality ammo. I thought this might have something to do with the barrel being tensioned by the block in the forend so took it off, which is easy as it’s only held on by the QD sling stud.

Both accuracy and reliability improved with the gun now running on sub-sonics without any of the aforementioned problems. I assume it allows the barrel assembly, which consists of the action and scope mount upper to sit naturally and vibrate freely, so I am not really sure why it’s there at all! However, I would say check the main mounting screw as mine came from the box a bit loose and I wouldn’t have known about it unless I had removed the barrel block. I suppose testing consumed about 500-rounds and with the barrel sorted and apart from the odd popper or cracker the SR22 ran 100%.

I like the CAR15 layout of the SR22 and find it an easy one to use, though the limitations of the fixed stock - which we can do nothing about - is annoying. But if this is how Ruger has to ship them out so the rest of the world can have them; there it is!

Now we come to the nitty gritty - cleaning! As semi-auto rimfires go the 10/22 is pretty reliable, but like all blow-back mechanisms of this type you get a lot of crud building up inside the action. If not cleaned away it will decelerate the breech block as it cycles and cause feed, ejection and chambering problems.

To remove the bolt you first have to take the barrelled action out of the Nordic stock, which is a pain. You will need a(3/16th) Allen key, large slot head screwdriver and a #15 Torx drive. Start by removing the two forend adaptor screws and pulling off the forend assembly. Next remove the single action screw. Now I thought it’s just a matter of lifting the barrelled/action complete with scope mount off; wrong! This has to come off too as the action needs to be angled out of the receiver void, which can’t be done with the top rail assembly in place. To achieve this - the scope needs to come off; not good. For this you will need the #15 Torx driver and watch out for those tiny screws as they can get lost.

The job takes about five minutes and though not long is enough to put you off; especially with the need to remove and check-zero the scope on re-assembly, and the extra tools. Plus all that screwing in and out will doubtless accelerate thread wear on components. If you were to get an SR22 then the logical solution is to remove metal from the rear of the Picatinny upper assembly so it can come out with the receiver. Or at least use QD scope mounts.

However, I like the look and feel of the SR22, as it does improve handling and shootability over the standard 10/22. Plus this straight-line layout with pistol grip is a good one for night vision. Hunting aside this is also a nice option for the Action/Practical rimfire shooter, as with some form of low power scope or red dot on top, combined with the selection of hi-capacity magazines, drop-in trigger kits and controls etc. will allow you to race tune the basic gun easily.

We Reckon:
Trigger could be better
Practical layout
Stripping is a pain but mandatory for reliability