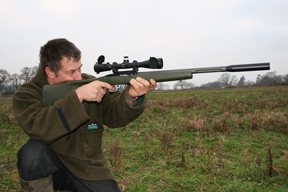 GOMS (Grumpy Old Man Syndrome) seems to be sweeping the Potts household of late. I know what I like, so why should I change?… I do prefer the slower pace of life and that includes my rifles. Single shot, bolt actions all suit me fine, only wildcat calibres tend to buck the trend in this respect. So when I was asked to test a custom Ruger 10/22 semi-auto rimfire I was less than enthusiastic to be honest. Any rifle that has to have most of its component parts discarded to make it perform to top spec does not really tickle my haggis quite frankly. However I was intrigued with some of the spec of this test rifle and duly agreed to test it - and I was going to really test it believe me.

North West Custom Parts is a relatively new name on the shooting scene but is fast gaining a good reputation for building custom versions of Ruger 10/22 and Savage rimfire rifles.

Add to this the fact that they are dealers for Bell and Carlson aftermarket stocks and Forster reloading products and you have a nice little business. The company is headed up by Wayne Titterton, a seasoned shooter with the enthusiasm to give the shooting public good products at a realistic price.

The test rifle was a full-on sporter, although Wayne’s business also caters for a large wedge of the target shooting fraternity, however the sporter was better suited for my purposes.

Build spec can be as adventurous or scant as you wish dependent on your requirements or monetary situation. The test rifle was right up at the top and the price was £1019. Yes that’s a lot for a rimfire, well any rifle really, but you are buying a rifle that is custom built and cannot be modified any further, buy this and you have no need to change your rifle, ever!

The stock is the easy part, a Bell and Carlson (B&C) premier thumbhole model that is a 100 % drop-in unit. Unlike many synthetic stocks the B&C has a solid feel without that hollow injection moulded resonance that so many competitors have. The graphite aramid fibres give an incredibly light and strong stock design which is impervious to the harshest British weather and solid enough to take real world hunting knocks and scrapes.

Sling swivel studs are fitted as standard and there was a Pachmayr Decelerator recoil pad fitted; one of the best in the business, nice and squishy and very tactile in the shoulder. External finish is just as good with a really wide choice of paint finishes on offer. Camouflage patterns are all catered for with the usual designs in woodland and snow options from the main American players. There is also a nice proprietary option with the Carlelite camo which has a fern type montage which I like, the test rifle bore a very nice green base with black spider web design overlay that suited a rifle designed for the woods.

The barrel channel was for a bull barrel design with a nice wide forend area. With no chequering the grip is via the stippled web finish which works very well, even with rain or blood on your hands. The thumbhole design is much to my liking, very reminiscent of my Lawson custom thumbhole designs with an off set grip portion to allow your firing hand to sit in a more natural position. Design is good and is tested to withstand temperatures of -50F to +140F and is covered by a limited life time warranty.

The green matt colour was chosen to compliment the barrel\colour which was also green. As an overall hunting package the matching colours make real sense.
Keeping to the light weight theme the replacement barrel was an incredible piece of kit. Sourced from Tactical Solutions the barrel was a scant 16 inches long and wore that matt green hard anodised finish which I have to say looked very smart. The barrel is heavy varmint with a 0.920 inch profile but only weighs 15oz’s. This is achieved by the construction of a steel inner barrel liner with an external skeleton of lighter alloy. Add to this the barrel has a partial fluted surface and you have a very good and usable bullet steering unit. The twist rate is 1 in 16 so will handle all the common rimfire rounds but some heavy designs such as the Aquila SSS with its 60 grain bullet may not stabilise correctly.

The chamber is also an area that has seen special attention as the tight tolerances are more akin to a finely cut match chamber to eke every last bit of accuracy from the barrel. However a word of caution, most automatic rimfires have “slack” or sporter chambers on the sole premise to achieve total reliability in feeding the rounds in quick succession. Therefore careful selection of ammunition is necessary to achieve not only maximum accuracy but also 100 % reliability. I will go through this in the field trails.

The only original parts left from the Ruger 10/22 rifle were the action and safety. This rifle still had the black painted finish but for £40 Wayne can have the action polished and clear anodised for a custom look if desired. Within the action is where most of the hard work starts with every part undergoing a change or modification. You can change as much or as little as you want but I would replace the extractor to match the barrel to keep integrity. Firing pins, extractors, bolt, mag releases buffers, triggers, bolt handles, etc., can all be changed and this rifle had the best.

Ejection is achieved from another Titan Arms product with a LTS-Pro unit available in black or silver for £17.95 apiece, while the Rimfire technologies Black Widow recoil buffer stops over travel of the bolt and is listed at £6.95.

Even the bolt handle was replaced to achieve a better user friendly operation; the Rimfire Technologies extended bolt handle in plain black for £27.50 made operation of the bolt slide much easier and is worth the money.

One area that all autos suffer is in the heavy ‘lack of feel’ triggers that come with standard rifles. I had two units to play with. The Rimfire Technologies unit has a custom trigger group with a full width target trigger both smooth and well sized. There is an adjustable sear, auto bolt release, target hammer spring and a fantastic mag release system. This looked just like the under lever from a Ruger No.1 stalking rifle, in that the magazine release usually fitted flush with the action is extended to curve around the contour of the trigger guard to form a quick release lever that only needs a slight flick with two or third finger of the shooting hand to operate. All this will set you back £180 and is well worth the extra money in the build program.
The second was a silver finished Power Custom unit, again with custom trigger, Target hammer sear, and springs with a wide profile trigger blade but with standard mag release.

If you are unsure of the spec you will need, chat to Wayne and he will set you straight. I needed the rifle to shoot subsonic not High velocity or target loads so it was customised thus. This is all very exciting and interesting but how does it all gel together and actually shoot?

This model sported a 15 MOA one piece scope base that allows you to adjust your scope to perform with a perfectly optically centred reticule with maximum adjustment, vertically up and down.

Like I mentioned this rifle is a custom item and needs proper feeding to get the best from the rifle. It certainly had a preference for certain types of ammunition. I tried subsonic ammo from Aquila, CCI, Eley, Lapua, RWS and Winchester.

It digested most of the six subsonic loads with impunity but found the Eley and RWS just too tight to cycle 100 % reliably. The rounds were cycled but an extra nudge of the bolt was necessary to fully chamber the round. Accuracy was fine at 0.75 to 0.95 inch at 50 yards with these rounds but as the other subs performed beautifully I stuck to them.

Out of the Winchester, Lapua, Aquila and CCI subsonics the best of the bunch were the CCI and Winchester. The CCI shot a 40 grain (39.8gr weighed) hollow point bullet at 1068 fps and 101.3 ft/lbs energy and placed five shots into 0.4 inches at 50 yards. For an auto I was astonished quite frankly and my apprehension towards these semis was to change when the Winchester nearly duplicated the CCI rounds by placing their 40grain (40.3gr) bullet into 0.55 inches with a velocity of 1051fps and 98.1 ft/lbs energy. In fact several groups were in the 0.25 region only to be spoilt by a shot out of the group to enlarge it.

Aquila too gave some surprisingly good groups that would be proud of achieving with a bolt gun. Five shots with a velocity of 1047 fps and energy of 97.4 ft/lbs all clustered consistently into 0.65 inch 50 yard groups, which lets face it means rabbits out to 100 yards if necessary.

Lapua and Remington fared less well, they functioned without problems however, but shot groups around the one inch mark which just goes to show, as with all rifle load development, you need to shoot a wide range of ammunition to truly gauge the potential of your new purchase.

As with all autos, any malfunctions in the feeding department are usually associated with an iffy magazine, I was using standard Ruger 10 round rotary units and yes I did have several stack polling of rounds but nothing to spoil the fun.

Extraction was good and the whole cycling action was positive and reasonably quiet, even with the moderator fitted. I used both a Power Custom trigger unit with adjustable hammer and trigger parts (all sprung for subsonic use) and the Rimfire Technologies custom trigger group. I favoured the trigger feel and pull of the former unit but the quick release under mag release of the latter was very user friendly. But be careful when the rifle is slung as occasionally the lever snagged on my jacket and partially dumped a magazine.

Once I had checked the preference of the rifles I had readdressed the smart /dump balance in ammunition choice and achieved a rifle that shot bullet on bullet at 50 yards, and that’s from a semi auto!

All in all I had to reassess my preference for slow bolt action rifles, clearly as with most things in life, nothing stands still, technology will advance at an astonishing rate, to a point it would seem when auto rimfires can stand their own with bolt guns. Blimey I must be getting old…

NWCP rifles offer shooters who demand quality with a product that puts the first round where you aim it and then follows it up with the remaining nine shots!