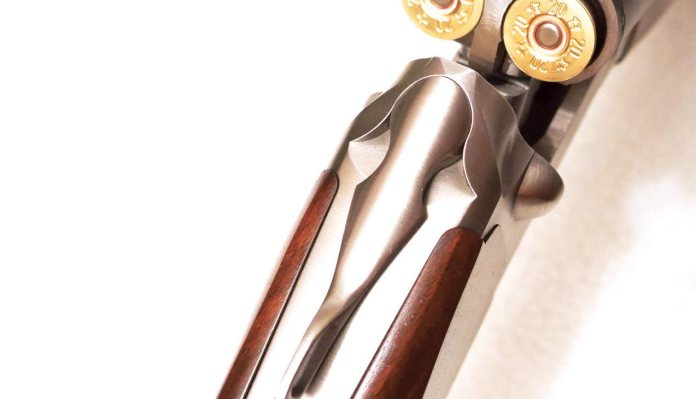 Thanks to low labour costs, the availability of sufficiently modern out-of-patent designs that could be freely copied, and a good helping or entrepreneurial drive, Turkey has established itself as the leading source of budgetpriced shotguns. Over the years, the quality of its output has risen markedly too. So has diversity, as guns have been offered in tactical fancy-dress and a rainbow of colours, and as a staple diet of semi-autos and pump-actions has been supplemented by a variety of over-and-under and side-by-side designs. What has been missing, perhaps, is a sense of real novelty or innovation. But Akkar’s new Mammut three-barrelled shotgun strongly suggests that is about to change.

Of course, there’s little new under the sun in firearms design. The Germans and their neighbours have been making three-barrelled Drillings for a very long time; whilst at the turn of the 20th century examples were made by Boss, John Dickson & Son and Edwinson Green in the UK and by Verney-Carron in France; and recent years have seen the Austrian firm of Johann Fanzoj and the newly-revived English firm of Joseph Manton offer triple-barrelled sidelock guns in the shape of the Tri-Bore and Tribute, respectively. But all these guns are painstakingly hand-built, extremely rare and seriously expensive.

Not so the Mammut, which is mass-produced on modern machinery, available at your local gun shop, and costs little more than a standard Beretta O/U. These benefits aside, the Mammut has a couple of additional advantages over most of its prestigious predecessors.

Firstly, unlike Dickson’s ‘flat three’ side-by-side-by-side layout, or the Drilling’s ‘twoup- one- down’ configuration, emulated by Manton, the Akkar uses Edwinson Green’s ‘oneup- two-down’ arrangement, which offers the shooter used to an over-and-under gun a conventional view along the sighting rib.

Secondly, it has a single trigger – the Dickson had three! – though there is no selector, so the barrels will always fire in the sequence: right-left-top. Some versatility is offered, however, as the Mammut is equipped with interchangeable chokes. This means you can set the gun up to shoot increasingly tight patterns for going-away birds when walking-up or decoying, or increasingly open patterns for driven shooting (where etiquette permits!).

This brings us to the question you’ve probably been asking since the start of this article: why? Well, the novelty value alone made me want to test one; but it’s also true that in a country where special dispensation in the form of an FAC is required if you want to own a shotgun that holds more than two cartridges in its magazine, the Mammut offers a supremely fast and reliable alternative to a semi-auto.

In countries – such as Turkey – where driven boar are commonly shot with slug loads from shotguns, one can see it being an attractive option too. After all, hunters of dangerous game have long favoured fixedbreech double rifles over boltaction repeaters for their speed and reliability, and a triple-barrelled gun has one obvious advantage over a double when withstanding a charge. Closer to home, that reliability may be most prized in the mud of the foreshore; and on a flight that offers few chances, that extra cartridge could be very welcome indeed. Akkar also make the Mammut in a 12g version with 3.5-inch chambers and a synthetic stock in black or Realtree camo called the #335. Edgar Brothers will be bringing this model in too, and I think it could do well, especially if equipped with extended steel-proofed chokes.

The gun on test is the #320, which has a much more classic aspect, being presented with a gold-anodised trigger, a satin-finished silver action and an oil-finished stock in more-than-presentable walnut. This – literally – polished appearance is somewhat offset by the dull matte finish on the barrels, though, and by the presence of a big fibre-optic element, rather than a gold bead at the end of the sighting rib. The latter is ventilated, a trim 7mm wide, parallel and with a flat, chequered top.

There is no decoration on the silver action, except for the words ‘Mammut Triple Fire’ on the underside, and this legend is also applied to the right-hand side of the upper chamber in a muted gold colour. The other side is stamped with the calibre and place of origin, and the join between the tubes and the monoblock is effectively disguised by a band of chain-link decoration that is complemented by another at the breech end. Overall, I like the uncluttered, minimalist look, and much prefer the simple geometric cutaway in the broad thumb-pad of the top lever to the ornate patterns often encountered. A discreet blackaction version is also available.

The controls are undoubtedly positive: the manual safety has deep ridges, a pronounced hump for your thumb and makes a distinct click as it slides forward; the resistance in the top lever makes you glad of the large thumb pad; the Deeley-type fore-end fastener exerts a firm grip; and a similarly firm grip is required to open the gun. All these operations will probably ease up with use, but you can’t deny that the Mammut starts off with everything tightly fitted!

The trigger breaks crisply enough, and with no measurable difference between pulls, which are a heavy-ish 7lbs each. The transition from one sear to another is mechanical, rather than inertia operated, and thus guaranteed to function every time, whatever load you shoot, and however you hold the gun.

The dimensions of the stock should suit most, though the length of pull is perhaps a little short at 14 1/3-inches (365 mm). There’s a slight R/H cast, and drop is 1 5/16-inches (36mm) at the comb and 2 7/16-inches (60mm) at the heel, so within normal U/O parameters. The semi-beavertail-style forend s typical of Turkish side-bysides. It fits the hand well, as does the pistol grip, which has a modest palm swell and places my finger nicely on the trigger. The chequering is neat, but rather flat, making it more decorative than effective. The stock is fitted with a soft rubber recoil pad. This is mounted on a black plastic spacer, which would be easy to add to or swap out. I think Akkar have missed a trick by not supplying additional spacers with the gun: they would cost pennies and add to the Mammut’s appeal.

You do get a basic-but-tough plastic travel case, a choke key, and a set of five choke tubes: cylinder, ¼, ½, ¾, and full thrown in. And additional chokes are available from Akkar, or you can fit aftermarket Remchokes. As Akkar advise that only their cylinder and ¼ choke tubes are suitable for use with steel shot, wildfowlers may feel that more robust alternatives are worth the investment.

The Mammut was agreeable to shoot, though – perhaps due to the shortish stock – recoil was more noticeable than I anticipated from a gun whose weight of 3.44kg is well above the norm for a 20g. It was quite flat-shooting too, with patterns from all 3 barrels well centred on the bead.

One of the things that has always made triple-barrelled gun rare and expensive is the difficulty of regulating all three barrels to shoot to the same point of aim, and the lack of any provision for mounting an optical sight indicated that Akkar wasn’t making any such promises for the Mammut.

Nevertheless, I decided the best way to see how well regulated the barrels was to shoot some slug loads. So I put out a target and shot three rounds of slug from 25-metres and a further three from 50-metres. The result: two three-inch groups! The 25-metre group would have been tighter too if I hadn’t dragged the first shot low. Much impressed, I backed off to 75-metres, but this was evidently beyond the combined capability of the bead, the trigger, and the nut behind it. All the same, well done Akkar!

The three-barrel format doesn’t leave room for ejectors, so you need to pull each spent cartridge from the chamber. I found this was easier if I treated the Mammut like a double rifle for dangerous game: pointing the barrels skywards as I opened the gun, especially since with some loads the empties would simply drop out. As regards handling – as you might expect – the Mammut was slow and steady rather than fast and agile; so, good on a straight high bird, but harder to manage when snap shooting bolting rabbits or (don’t even try it!) roost-shooting jackdaws.

My feeling is that Edgars should have picked the 24-inch barrelled version of this gun rather than the 28-incher. The shorter barrels would reduce the Mammut’s overall weight by 5.3oz (150g), and bring the balancing point closer to the hinge pin – it is 1¾-inches forward of it on the test gun – for more agile handling.

My 16g Drilling has 24-inch barrels and handles very much like a double-barrelled shotgun with 29-inch barrels. I imagine a Mammut with 24-inch barrels would perform similarly well. Presumably the longer barrels have been chosen on the basis that the Mammut is weird enough already, without wearing unusually short tubes! Anyhow, the good news is that the 24-incher is available to order.

Though the 28-inch barrelled #320 isn’t the gun I would have picked from the Mammut series, I still found it stylish, well-built, and great fun to shoot, all of which makes it very good value for money.