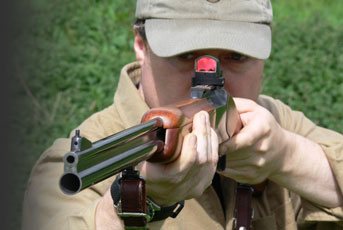 Anyone who hunts must at some point have said to themselves: “I’d have had that one if only I’d brought the [insert name of gun left behind in cabinet here]”. Many of the same people have also experimented with taking two guns into the field, but no one I know has made a habit of it; it’s just too cumbersome, especially when you have other kit to carry or jobs to do.

A better way to improve your chances of having the right gun with you is to acquire a combination piece, whether this be a classic three-barrelled drilling, an exotic four-barrelled vierling, or simply a double gun with one barrel bored smooth and the other rifled, each chambered for a suitable shotgun or rifle cartridge. Such guns are formally dubbed bockbuchsflinten, but commonly known as BBFs or just as “combination guns”.

As well as being cheaper than drillings, BBFs are also made by the majority of Continental firms that manufacture O/U shotguns, which gives a wider range of styles, features, and price points to choose from. And although most BBFs will cost you more than the equivalent O/U from a given maker, there are a few exceptions, a case in point being the Baikal IZH MP-94 Sever that is the subject of this review.

I first felt the need for a BBF after I took on some “keepering” duties on a driven shoot. When out filling feeders, checking traps and so on I would often encounter a range of species, from squirrels and magpies to (more rarely) fox and muntjac, that it would have been a satisfaction to deal with there and then, if only I had the right gun…

So I put in for a variation and filled it with an IZH-94 Sever, which at around £700 new, was easily the most economically-priced gun in its class, though the same calibre combination is now available in the lighter IZH MP-94MP for just £555. Of course you can find good second-hand examples too, as well as Savage’s now-discontinued Model 24, for considerably less.

First impressions are of a very Russian gun. The only engraving is functional or informative rather than decorative, the stock is (probably) beech, and despite showing a somewhat rounded, generic shape in the butt, has a distinctive two-part fore-end that wraps right around both barrels. The panels of chequering on either side of the pistol grip and fore-end could be neater, but do their job perfectly well for all that. The butt is straight, with no cast, and has no recoil pad, just a classic chestnut brown Bakelite plate, ribbed and embossed with the Baikal logo, and 1” sling swivels are fitted as standard. [Note: the latest Severs come with ventilated rubber recoil pads].

The IZH-94 has a Browning-style boxlock action, featuring a full-width bolt that engages a corresponding bite in the rear face of the monobloc, which itself has a forward lug that locks into a cutaway in the bottom of the bar. Meanwhile the fore-end is held in place by a Deeley-type latch. The gun is a non-ejector, but the extractor lifts the cases 3/8” clear of the chambers, which is just enough to give you something to get hold of. Meanwhile, the safety catch is automatic, and there is a separate trigger for each barrel.

Although most BBFs place the rifle barrel below the shotgun barrel, on the Sever this arrangement is reversed, with the result that the front trigger is for shot and the rear for ball. This makes plenty of sense, since the greatest recoil force is exerted by the 20g and this is placed low down at the strongest part of the action, and since the trigger finger falls most naturally on the front trigger when taking the sort of snap shot to which shotguns are so well suited.  Placing the rifle barrel on top also makes it easier to load and unload the smaller WMR cases.

On more sophisticated BBFs the lock for the rifle barrel is usually given a set trigger, but this is not the case with the Sever, and both triggers are quite heavy, at around 6.5 lbs each. The rifle trigger also exhibits a degree of creep that varies from shot to shot so best results are obtained by pressing it swiftly and decisively, and concentrating on the follow-through rather than the breaking point.

BBF’s are typically fitted with very small iron sights, so that when using the shotgun barrel on running or flying quarry the sights distract the shooter and obscure the target as little as possible. The Sever is no exception here, showing a raised ramp at the muzzle mounting a simple square front post, and a corresponding rear notch. Nevertheless, it has proved itself up to the job of taking rabbits and other vermin out to 80 yards or so with the WMR barrel, and will put 5 rounds into about 1.5” at this range. The sights are adjustable too: windage being set at the rear by drifting the block left or right in its dovetail, and elevation by turning the threaded post clockwise or anti-clockwise to lower or raise it.

A dovetail rail is also provided, brazed to the top of the monobloc. The dovetails are a standard 11 mm across, but short at just 70mm, so an extended base is needed for most scopes. I’ve found the best solution is to use a one-piece, lever mount by Kozap. This gives me a quick-detachable base fitted with either 1” or 30mm rings. In my experience, however, the extra 50 yards or so of effective range that a scope can offer is rarely needed, and the low comb of the shotgun-style stock also has to be supplemented by a neoprene comb-raiser if I’m to get any sort of cheek weld. I keep both a scope and a comb-raiser in my pack, just in case they’re needed, and have occasionally made a successful “long shot” with them, but really any BBF is at its best over open sights since it is very hard to use the shotgun barrel effectively with any kind of optic mounted.

The shotgun barrel itself has a 76mm / 3” chamber and a 15.7 mm bore, constricted to 15.4 mm at the muzzle, equivalent to half choke (0.012 mm). The felt-wadded Hull Sterling Game 30g cartridges I use print even patterns that are nicely centred on the tip of the fore sight. Length-of-pull to the front trigger is perhaps a fraction long at 14.75” but otherwise the Baikal is easy to shoot, and has accounted for any number of squirrels, magpies, crows, rabbits and pigeons, as well as one very-close-range fox.

In fact, the WMR barrel probably doesn’t get used a tenth as much as the 20g tube, yet I’m always glad of it when my quarry is sitting “out of range”. Indeed, I’ve found that crows seem to be able to distinguish between a scoped rifle and a shotgun, and with the Sever I have caught out quite a few who mistakenly thought they were too far away to be in any danger from the little O/U.

At just 6lbs 10oz and 40.5” in length the Sever is compact and easy to carry, especially with a sling fitted, making it easy to keep handy, whether in the 4X4 or on foot, and has proved to be a sturdy and reliable tool for controlling vermin on the shoot. The .22WMR cartridge is quite adequate for foxes, and more than enough for corvids, squirrels and rabbits, so if like me you like to eat the latter, expect to be cooking up more saddle and hind-leg than fore-quarter!

Of course, you can’t fit a moderator to a BBF as you can with a conventional rifle, but the WMR is no louder than the 20g and few would quibble about carrying an un-moderated shotgun. You also get just one shot per calibre, but left-and-rights aren’t what this sort of shooting is about. That notwithstanding, I have scored a couple of memorable doubles with the gun; on one occasion shooting a first rabbit sitting with the WMR and then taking its companion on the run with the 20g, and repeating the trick with a couple of crows on another.