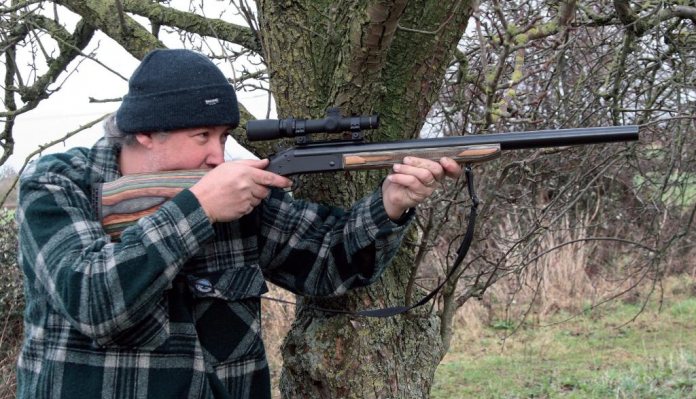 Harrington and Richardson (H&R) was founded in 1871 by Gilbert Harrington and Franklin Wesson, it was originally called Wesson and Harrington. Harrington previously worked for Ballard and Fairbanks where he was instrumental in designing the first selfejecting revolver. The technical manager at Ballard and Fairbanks was called William Richardson and when Franklin Wesson left in 1874, the company then became H&R as we know it today.

While primarily manufacturing pistols, they had a licensing deal with Anson and Deely shotgun makers in Britain to market the ever-popular doublebarrelled shotgun. But H&R have earned their reputation over the years for producing very reliable, well-priced rifles, shotguns and pistols that are designed for hard use and not show. They can often be overlooked but actually offer a very good old school engineered gun, built to last. Today they have a subsidiary company called New England Firearms and both companies are noted for the huge variety of singleshot rifles and shotguns that they manufacture.

The Ultra Slug gun is just one of the various guns that they supply and it originally starts life as a 10-gauge single barrel shotgun but with a blank tube. This is then chambered to either 20 or 12-gauge (on test) but more interestingly being a slug gun, the bore is rifled along its entire length so shoots slug ammunition far more accurately for deer or boar use. So technically a 12-gauge rifle, not a shotgun.

The single-shot, break-open shotgun design is so simple it is mechanically perfect, or should I say perfected over the years to offer reliability and safe shooting with a variety of ammunition. The solid steel one-piece receiver has a front-mounted-type hinge pin around which the barrel pivots to open, with the barrel locking up directly into the jaws of the receiver with a locking bar traversing the barrel locking lug. It is incredibly strong yet simplistic and all the better for it, less is sometimes more. On the rear tang area to the right is a push-down lever that allows the barrel locking mechanism to release. The action has to be manually cocked with an external hammer in order to fire the H&R. If a scope is mounted, then ideally an extended spur is needed to access the hammer correctly.

I love the barrel profile, it is enormous! It is only 24” in length and chambered to take 3” cartridges but the massive wall thickness gives a serious heft to the gun, which is needed to dampen recoil! The 12-gauge version weighs 8lbs while the 20-gauge version weighs more at 9lbs, due to the smaller bore and so more metal in the barrel wall. Both guns have an overall length of 40”, so nice and compact.

The big difference with the Ultra Slug gun version to its shotgun counterpart is that the barrel is fully rifled to shoot slug ammunition. In the USA, some states have a shotgun only deer policy and so shotguns with rifles barrels are very popular and legal. Here in Britain, practical use is for boar if you have them.

The barrel has a 1:36” rifling pitch with H&R’s own Ultragon rifling lands for a precise and accurate shallow bore profile. These barrels will shoot standard Foster-type slug ammunition but are designed to shoot Sabot ammunition where 2.5” groups at 100 yards are not unheard of. I have used this gun and the Savage bolt action 12-gauge slug gun to hunt Whitetail deer in American with my elder brother and can attest to the great accuracy from the H&R. You can also shoot normal shotgun ammunition through it, and you would think the pattern might spread more due to the rifling effect but the patterns all look pretty normal. There is also a very powerful ejector that literally sends the spent case into orbit or your eye as the action is opened!

With no sights furnished, a one-piece Weaver-type rail is supplied that fits to the barrel for scope use. A low powered variable is ideal for running boar at low mag and then turned up to higher for deer. Alternatively, a decent red dot would work just as well.

There are several stock options. The basic is a sporter-type design that has a full pistol grip and is made from American Hardwood finished to look like walnut. It has a Monte Carlo comb and sling swivel studs fitted. A better option, and the one I have, is the same sporter style but made from laminated birch to offer better strength and weather resistance. There is also a very nice laminated thumbhole option on newer versions.

To be honest, the trigger pull is pretty dreadful. It is heavy with more creep than a lounge lizard but you soon get used to it and models do vary. I found the best Foster-type ammo to be the Winchester 450-grain slug, with a diameter of 0.733” to engage the lands a bit better than most. It achieved 1511 fps|2282 ft/lbs energy and 2.5-3.0” groups at 100 yards.

Sabot slug wise, the Lightfield hybrid slug was excellent. It has a 546-grain lead core and plastic riding sabot bands covering the outer surfaces which separate after the slug has left the barrel. Sub 2” groups and 1366 fps|2263 ft/lbs energy shows excellent performance for a cheap ‘shotgun’.

If you can find one, buy it, as it is so much fun to shoot, but it will be Section 1 due to the rifled barrel. The H&R Slug gun won’t win any beauty pageants but it will really make you smile when plinking, I mean testing reactive targets. I guess prices second hand would be around the £300 mark. An interesting blast from the past that leaves a lasting impression, usually on the shoulder!