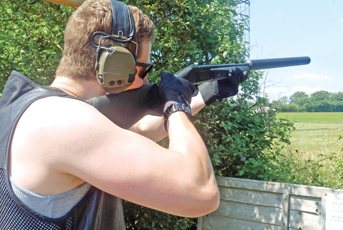 Following on from my article last month on the Saddlery and Gunroom, I mentioned that I had picked up a Baikal .410 Hushpower, which of course they specialise in. GunMart’s editor asked me to do a review on my purchase – so here it is.

I haven’t taken the task of this review lightly as I genuinely believe that there are a lot of people interested in this type of sound moderated shotgun. Whether it is to be considerate to other people in a noise sensitive area or to minimise the chance of being detected between shots by the particular pest you are after. In my opinion the shotgun is probably the most versatile piece of equipment available to most shooters, with noise being its biggest downfall, so the applications of a shotgun that makes as little sound as possible needed exploring.

The first thing you will notice is that this gun is light and weighs in at approximately 6 lbs, but that is hardly a surprise bearing in mind it’s a single barrelled .410.  Looking at the gun, most people expect it to be very front heavy due to the enlarged diameter of the barrel, but actually it is perfectly manageable. I personally find it well proportioned and balanced.

Being 6ft 6inches tall I was surprised to find the gun fitted me remarkably well and comes up to the eye nicely too. Breaking the gun is very simple and is done by operating the lever at the rear of the trigger guard. A push-through manual trigger block safety is fitted into the trigger guard.

The Baikal is a very straightforward piece of equipment, it has no ejector, just an extractor (some other Baikal models are available with an ejector). The action is stiff as expected with a gun fresh out of the box but this was remedied with a good clean and a light application of grease.

An important note is the gun measures in at around 50 inches in length although it does not look that long.  It only becomes apparent when you try and get it into the gun cabinet! It does fit mine at a push but if there is an issue you can always disassemble the gun. Overall I would describe this Baikal Hushpower as purely practical and built to a very basic but incredibly durable format.

I was pleased to see that although the stock is synthetic it is in fact very robust and well-made, stocks of this nature always run the risk of feeling hollow and cheap. If you do not like the synthetic stocks then a wooden stock is still available.  I genuinely do not foresee any problems with this gun, as there is not much to go wrong.

At the Clay Ground

I have never used a .410 on clays before and this is not a gun that you will normally see at most clay grounds, but I took it anyway! My thinking behind this was to see how it handled and to see if it was of any use when trying to hit moving targets. I also wanted to get some cartridges through it to choke up the sound moderator. I have been told that with a bit of use the gun actually gets quieter. I did not expect to hit much, as after all it is only a .410 and there are not many pellets in those little cartridges! It is full choke only and last but not least the point of aim is very different from what I am used to. The bead obviously sits well above the muzzle so as expected the shot falls lower than your point of aim.  I thought this might prove a bit awkward when trying to shoot clays.

However the first shot smashed the clay to pieces and it quickly became apparent that the 3” cartridges really packed a punch. I had a go on incoming, outgoing, rabbits and was having no problem dispatching them all. I found the whole experience very rewarding. It’s amazing how much effort you put in when you only have one shot, not to mention the fact that each cartridge costs around 25p. In the end it really did not take long to get used to the Baikal and if you like a challenge…have a go at a few clays with a .410. It’s worth mentioning the increase in difficulty when using cartridges with a significantly lower shot count. To give you a rough idea a 3” .410 18gram cartridge has approximately 174 pellets, a 2.5”  .410 11gram has 116 pellets. Compare that to a 12g 28gram cartridge, which has approximately 400 pellets in it!!

In the field The aim of this test was to quite simply establish how quiet and ultimately how effective the Baikal Hushpower is in the environment most people will be using it. I intended to tackle this in two stages, first was to establish which cartridge was the quietest. Secondly to see how effective the various cartridges were. Luckily for me I had two guns at my disposal and a friend to help. The cartridges we had at our disposal were Eley 2” 9 gram No 6, Hull 2.5” 11 gram No 6, Eley 3” Magnum 18 gram No 6 and finally Eley 3” 18 gram No 6 Subsonic cartridges.

We quickly established that all the cartridges were pretty much as loud as each other from the shooters perspective (the breech end!). The normal Eley 3” magnums were too loud to be of any advantage so we felt there was no point using them in this test as no advantage is gained from having a Hushpower.

We then carried out a series of tests where one of us would stand away from the shooter at increasing distances, while a shot using each cartridge was fired. A simple but informative test which had surprising results. It turned out that the noise from all the cartridges was significantly reduced by the Hushpower moderator. This was to the point that at a distance of approximately 60m anyone not deliberately listening out for a shot would not hear a thing!  The difference between the Eley 2”/2.5” and 3” Subsonic was negligible. The Hull 2.5” Game and Clay loads were without a doubt noticeably quieter.

Luckily for us four pigeons volunteered themselves for the next test, allowing us to establish the 3” subsonic load and the 2.5” Hull game and clay load were both effective.  In the end we both decided that the 3” subsonic were the best all-rounder’s as they packed significantly more punch due to fact that there are lot more pellets in them. However, they were louder than the 2.5” Hull cartridges. In my opinion the extra striking power is worth the slight increase in noise, especially when shooting rabbits. My advice would be to buy a range of cartridges as this just adds versatility to this little gun and that has got to be seen as a positive

This gun WILL surprise you, I have no doubt about that.  It amazed me that even while doing this test, pigeons were landing in the trees around us! It is however important to manage expectations. You are at the end of the day still firing a shotgun, so it is never going to be as quiet as an air rifle or a moderated .22LR, but the amazing part is… it is not much louder than these and you can shoot at stationary, moving and flying targets. GM