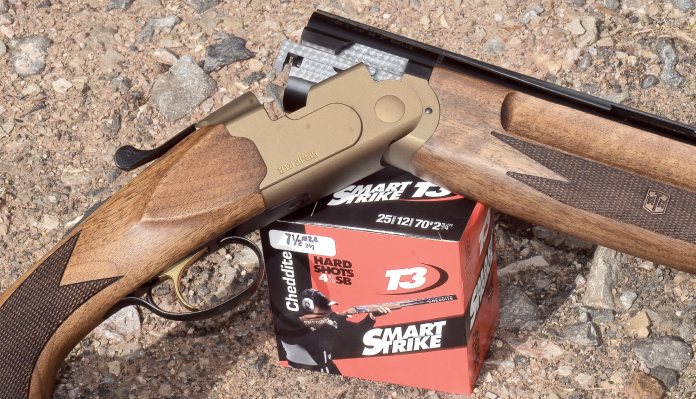 Now back on the UK market, courtesy of the Sportsman Gun Centre, the ATA SP will finally get the chance to make its mark; and there’s an excellent reason the SP should now be able to prove its popularity.

There’s actually no way around the fact that ATA’s SP in all of its seven guises is a Beretta 686, albeit with a different finish and a reprofiled forend. Reason being and without going into too much detail, this all comes about from an old arrangement between ATA and Beretta.

The fact the old 686 patents and licences have now more or less run out, the end result is a Turkish built version that although it’s not identical, is just as good but comes in at far less money. However, since virtually every Turkish built shotgun tends to be a copy or variation of an Italian design, it’s only the action shoulders that emphasise the fact. Similarly, the origins of ATA follow the usual path of most makers, an individual deciding they could do better than the rest, founder Celal Yollu the typical artisan.

The seven SP variations you can choose from represent all aspects of shotgun shooting. Either 28- or 30-inch barrels, all come accompanied with a set of flush fit multi-chokes and are all within £800 of each other, most of them even less. Available in both game and competition formats, there’s Black laminated, Black Adjustable, Elegant and believe me when I say it is, the camo SP Max, Black Game, Nickel Game and as seen here, the Bronze.

In the case of the Bronze, you get four choke tubes, a small variety of bits and pieces and one of the most distinctive over-under 12-bores you’ll see. You also get a shotgun that’s very good at what it does. Whether it was unique to the SP on test, the nicely grained oil finished sporter stock and forend were stained in a lighter, almost bronze hue, which both complimented and picked out the action’s colour. Well finished and fitted, a soft rubber recoil pad features a harder insert, so allowing an uninterrupted mount into the shoulder, the grip features a gentle palm swell that anchors the rear hand, whilst the ATA embossed forend comes with deep, full length finger grooves.

The 3-inch chambered monobloc barrels, in this case 28-inches, are finished in black chrome, a semi-gloss surface coating that is resilient to almost everything. Ribless in the middle and fitted with an 8mm vented top rib and red bead, the monobloc barrels swage into 3-inch chambers. The mechanical boxlock action that features the original’s pair of extending locking lugs and top tang are finished in a satin bronze colour, as the gun’s name might suggest. A gold-plated trigger blade and gold ATA Arms script adding detail and contrast but in respect of decoration, that’s it. Unusually, for a clay breaker, ATA have elected to fit an auto safety and whilst conversion to manual is a matter of a moment’s work for a competent gunsmith, the feature is something that personally I recommend the maker deletes.

Based around the weights and measures of the shotgun, the SP indirectly pays homage to, as you might expect, the dimensions are remarkably accurate. Weighing 8lbs 4oz and with an overall length of 4511mm/16-inches, the balance point is ½-inch forward of the hinges. Length of pull is a comfortable 14¾-inches, whilst the weight of pull is a precise 6lbs 1oz, the newly updated version now a far more defined gun to use in comparison the what went before.

Loading up with 24g Cheddite T3 Smart Strike filled with 7½s and shot through ¼ and ¾ chokes, the SP is a smooth, balanced 12-bore to shoot. If there was a comment to be passed, whilst the bottom barrel ejector was impressively strong, the top ejector was a little sticky. Whether this was caused by the factory being little to enthusiastic with the protective grease, or it needed slight adjustment, I couldn’t say but it was in no way detrimental to the SP’s overall shooting performance.

The SP handles well, is smooth and balanced to swing, eliminates virtually all recoil and can be shot comfortably over extended periods. Fifty or so of Malmo Gun’s clays allowed the SP Bronze to shine, the ATA proving that it’s a 12-bore any shooter will quickly become accustomed to, familiarity in this instance breeding clays that are rapidly turned into hits and ever increasing scores. Does it shoot like what it looks like you may ask? Yes, it does and to a degree, better at times. The Bronze is also a very attractive shotgun to look at, which, when you consider the £599.99 asking price, is all the more significant.

The interesting aspect, is that the SP Bronze new will cost you the same, if not less than, a well-worn second-hand example of the gun around which it’s based. Conversely, a new version of the Italian-built equivalent of the ATA SP will cost you three or four times that of the SP, but unless you simply must have a shotgun with the Italian name on it, the SP is a no brainer choice. The gun does everything as well as its Italian counterpart, looks good, feels right from the moment you pick it up, breaks clays with the best of them and the fact the gun can be had in seven different finishes means the SP ticks all the boxes and probably a few you hadn’t though of. The other ATA bonus is that their new importer has been able to significantly reduce the price!

With thanks to Malmo Guns for making their private clay shoot available and for supplying the Cheddite T3 Smart Strike ammunition. For more details about Cheddite cartridges visit them at www. malmoguns.com