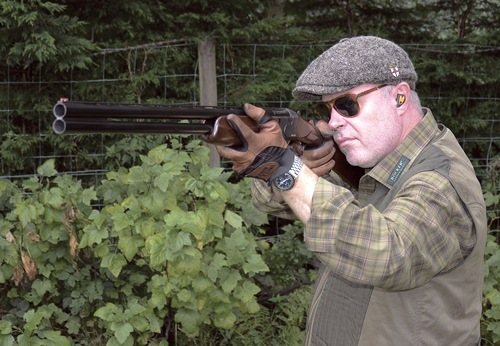 Courtesy of an impromptu visit with John Webster at Norgas Cartridges, an unexpected chance to try an ATA SP suddenly presented itself. One of the first UK dealers for this range of Turkish-built shotguns, John was curious as to whether I’d recognise the SP as, in many ways, it’s actually the reincarnation of another very successful 12-bore from another maker. No matter how you view ATA’s SP, there’s no denying that it’s actually a Beretta 686, albeit with a different finish and a reprofiled forend.

Without going into too much detail this all comes about from an old arrangement between ATA and Beretta, and the fact that the old 686 patents and licences have now more or less expired, the end result is a Turkish- built version that, although not identical, looks like (and in nearly every respect is just as good as) what it is (but obviously isn’t). But then, nearly every Turkish-built shotgun is a copy or variation on a theme of an Italian design – it’s only the action shoulders that emphasise the fact even more here. Similarly, the origins of ATA follow the usual path of most makers – an individual deciding they could do better; in this case the ATA founder, Celal Yollu.

When he was 13 years old back in 1955, Celal built and assembled his own single- barrelled gun; his first side-by-side following in 1967. A shift from his home town to Istanbul followed and the construction of a proper manufacturing facility, and the rest, as they say, is history. ATA, now run by his sons, Yavuz and Faith, after Celal passed away in 2010, is a brand that’s been looking for a UK importer for quite a while. It’s courtesy of Northern Ireland-based Wildhunter that UK shooters now have access to their extensive collection of shotguns, the semi-autos being an extremely attractive range of guns, while the over-unders, such as the SP adjustable on test, are testament as to why ATAs are a serious proposition.

Presented in a bright blue case with the component parts contained within red, heavily embroidered velveteen slips, a small case contains the four choke tubes, key and comb adjuster hex and shims. In other words, everything you need to break clays is ready and waiting; all in for just £999, a price that suddenly makes you sit up and take notice. Nicely grained and semi-lacquered the Sporter stock of the gun on test features a basic comb adjuster system that allows the shooter to lift the comb or shift it left or right, all movements measuring an exact 1⁄4-inch. The soft rubber recoil pad features a hard insert so allowing an uninterrupted mount into the shoulder, the grip a gentle palm swell that anchors the rear hand whilst the ATA embossed forend comes with deep, full-length finger grooves.

The barrels, in this case 30-inches (although 28-inches are available), are finished in black chrome, a semi-gloss surface coating that is resilient to almost everything. Ribless in the middle and fitted with an 8mm vented top rib and red bead, the monobloc barrels swage into 3-inch chambers. Echoing the barrels, the boxlock action is finished in contrasting panels of gloss and matte black that extends around the top tang and trigger guard, a gold-plated blade and gold ATA Arms script adding detail and contrast.

Unusually for a clay breaker, ATA have elected to fit an auto safety and, whilst conversion to manual is a matter of a moment’s work for a competent gunsmith, the feature is something that personally I recommend the maker deletes.

The SP with the comb at the lowest setting suited me the best, a few minutes with the Arrow Laser Shot confirming the stock’s configuration, allowing the SP to shoot flat. Physically the SP weighs in at 7lbs 4oz and has an overall length of 473⁄4-inches, drops at comb and heel are at the lowest 11⁄2-inches and 2 5/16-inches with a length of pull measuring 14 11/16-inches to the crisp and predictable 5lbs 8oz trigger. Loading up with 28g Clever Mirage T2 Competition loads, the cartridges John at Norgas requested that I test with, the SP was a high-scorer from the first stand. Balancing 1⁄2-inch forward of the hinges, the gun mounts easily and handles smoothly with just one small trait.

With the balance and pivotal point more or less beneath the action, you have to drive the SP especially on fast crossing birds – something that after a few targets you get used to.

Personally, I’d specify the extended chokes – an optional extra that Wildhunter offer the buyer. Adding a few extra grams to the end of each barrel, this slight weight gain would more than likely add, what for me would be, a sufficient increase in barrel weight which in turn would improve the SP’s ability to swing more under its own steam. Don’t get me wrong, this is purely a personal view – a little more weight up front would be something that for me would render the SP exactly how I like a Sporter to handle and move. It does, however, have little effect on just how competent ATA’s SP Adjustable is to shoot with. The flush-fit chokes pattern well, it dials out all but the last vestiges of felt recoil even from the notoriously punchy T2’s.

This gun is slick to shoot and when you combine how the gun feels along with how it looks, I wouldn’t have been surprised if John had told me the price was double that of the £999 price tag.

Combine the price and design and ATA’s SP definitely sets the dealers a challenge. Even old, well-used and even abused Beretta 686’s command more money than a new SP, which is if nothing else indicative of just how good and desirable they are. Conversely, the new equivalents cost three or four times that of the SP, but unless you simply must have a shotgun with the Beretta name on it, ATA’s SP is a no-brainer choice. The gun does everything as well as its Italian counterpart, looks good, feels right from the moment you pick it up, breaks clays with the best of them and the fact the gun features an adjustable stock for just under a grand means the SP ticks all the boxes and probably a few you hadn’t thought of.

Should you still be undecided there’s also a silvered action version or a fixed stock version that costs even less than £999 too!