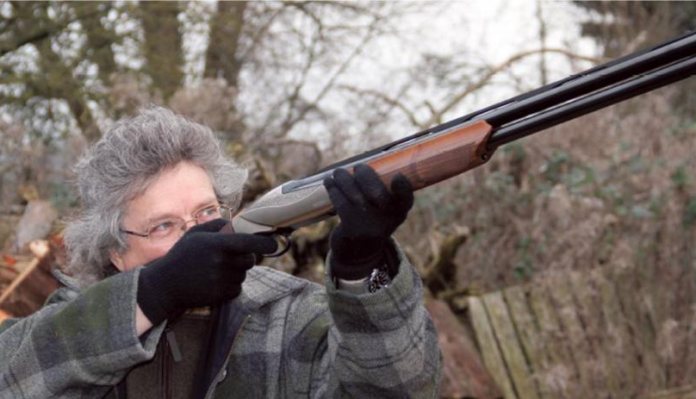 An over-and-under Benelli?”, I hear you cry! Why are the doyen of semi-autos and pump action shotguns taking up the mantel of traditional o/u shotguns? Well, the new model 828 o/u is certainly not traditional and Benelli have made it because they can! I like that attitude and I also like the radical design and some of the ingenious concepts the new 828 shotgun employs.

Every part of the 828 looks different, the only ‘same’ parts are that the barrels lie one above the other! The whole action and ejection system have had a radical rethink and the stock and action looks and ergonomics are true Benelli – weird! Weird but in a very good way. It puts two fingers up to the establishment and takes shotgun design to a new level.

I am calling it the Marmite shotgun; as with the .270 centrefire round, it’s a love-hate relationship. After the tests, I loved it but there are some issues. But overall you have a superb, lightweight 12g with carbon fibre rib, novel ejector system, radical looks, great handling and phenomenal patterns on the boards.

As with their semi-autos, the 828U has a very sleek and slender gait, with a long flowing action made from aluminium and finished on this model with a semi satin finish. There’s a mixture of polished aluminium, inset engraving of oak leaves and scrolls, with a very nice fish scale rear lower section that flows nicely into the stock section. Optional finish is black and cheaper at £2125.

The top tang, where the
opening lever is sited, is also long and very flat with a large but low mounted curved lever with impressed chequering that sits very far left. A full movement right is needed to open the action and the barrels drop down easily. Behind this lever is the safety catch and barrel selector that has an automatic safety; a push forward sets it to FIRE, with the same catch having a roll over switch for right, bottom barrel and left for the top barrel. My only gripe is it’s a bit low and my big hands needed a couple of attempts to operate correctly.

The action, although aluminium, has strengthened sections for wearing parts such as the steel inserts up front for the barrel hinge mechanism and a large sprung steel barrel locking block/plate. This allows a lighter aluminium frame and gives a rock-solid grip to the Monobloc barrel design. It’s all impeccably made and fits together very well.

The barrels lock by means of a pair of extending bolts that protrude from the action and locate into the extension arms at the top of the barrels, for a very positive and reassuring lock-up.

The barrel’s ejector system is another radical work of art, with an intricate mechanism with very long springs to each side of the barrels. It has another trick up its sleeve; the most amazing feature as you peer down the barrels is that you can see a single hole cut into the chamber wall. I pondered this, then realised it is linked to the ejection system, and not being an inertia type ejector, the cases are propelled at very good timing by pressure encapsulated from theses holes. Ingenious, as everyone remarked how far the spent cases were ejected!

That long curved opening lever also cocks the locks in the action and these locks can be removed, or completely dropped out of the action with the trigger group. You need to read the manual carefully but a tool is provided and this aids in cleaning and storage. Because the top lever cocks the hammers and not on only the barrels, you therefore have a better and more reliable mechanism that should last longer too.

I had the 28-inch barrelled version, chambered for threeinch shells of the 828U but you could opt for the 26- or 30-inch barrels if so desired. These are again very well executed, with lovely deep blued finish and Monobloc design. You have, and which I like, the separated mid-section between the barrels; i.e. no rib to connect the barrels from the ejector springs all the way up to the muzzle union. It looks good and allows for speedier cooling also.

Up top is the new carbon fibre rib of 7mm and low height, with a smooth top face and single red bead at the front and four sequentially smaller vents along the barrel contact points. It saves weight and is interchangeable for your own preference. You have a multi choke system and five chokes are supplied as is a choke key and ABS case.

Again, different and well thought out, the forend secures to the barrel lug but the release lever is actually a small button sited in the forend tip, a bit like a Blaser F16. Depress this and the forend is removed. It is well-sprung and easy to access. The forend has a combination of a scalloped finger recess to the top side and twin panels of chequering wrapping the way to nearly meet at the base. The chequering is laser cut and has individual semi fish scales, which give a good grip but are a bit prone to individually snapping off.

The rear butt section is attached to the action with differing spacers for adjusting drop and cast, with a length of pull at 14.75-inches. The pistol grip is very large and has palm swells to both sides and with fish scale chequering to match the action’s adornments. It has quite a long rake but is very comfortable and gives a good relaxed grip to the 828U without hand strain. The comb is slightly dropped but has a soft rubber cushioned inset that extends to both sides.

The recoil pad has Benneli’s Progressive Comfort system that diminishes recoil according to the level of shot charge fired with its sprung design. That’s why this 828U, despite being light, feels like a 20-gauge to shoot, no mean feat but it does. The walnut quality is also pleasant, with a nice colour and wood grain and semi-matt oiled finish.

Handling in the field as you would expect was very good and was the result of the combination of light weight, natural pointing abilities of the low design and light recoil. The point of balance sits just forward of the barrel action union, so lovely to hold without fatigue. Certainly, the recoil did seem reduced and even on the pattern boards, where you notice the recoil more, it was not a problem. However, I did notice on this sample gun that it had an odd trigger pull. Almost two-stage, with a long creep section until the sear tripped. Noticeable whilst patterning the Benelli but not noticeable out in the field, other 828U guns did not have this, so I am assuming a peculiarity with my sample.

That’s my only niggle, as actual firing has a unique cycle to it. Due to the barrel locking mechanism, the firing process seems minutely delayed, that’s not the right word but longer lock time in rifle terms. It made not difference to the excellent patterns or shooting but you could distinguish it.

The new Benelli 828U is certainly a very creditable and good performing shotgun. I can see this appealing to a broad spectrum of shooters from clays, competitions and pigeon shooters. I used the 1/2 choke and set up pattern boards at 30-yards and shot four differing cartridges, to see how she performed down range, which is ultimately the most important thing.

This case is designed specifically for the standard and FITASC sporting layouts and clays. It has a high brass shell, delivers fast shot speeds and smooth consistent acceleration with mild recoil.

It is available in 70mm or 2¾-inch cases with, a 16mm brass length in a 28-gram load and available with either plastic and fibre wads and shot sizes 6.5 to 8. I had the Fibre wad load and 7.5 shot size and 28-gram load as standard.

I had a superb, even spread with this load, with 197 pellets in the outer 30- inch spread and 139 pellets within the inner 15-inches, total 336. There was no room for a clay to slip through.

Diverse load for competitive shooters and ideally suited to the Benelli 828U. This is a 70mm or 2¾-inch case, blue, obviously, with a 12mm high brass head and fibre or plastic wad. Shot sizes range from 7.5, 8 to 9, with even patterns, high densities and hard hitting too.

I shot the 28-gram plastic wadded case with number 8 shot and I had an incredibly dense pattern with 271 No 8 pellets to the outer area and 170 pellets within 15-inches. Again, no holes and lovely even spread and a total of 441 pellets.

A broad-spectrum clay shooting cartridge with light recoil, good choice of shot size that is colour code printed to the new silver case.

You have a 28-gram load only but shot size of high antimony from 7, 7.5, 8 or 9 shot size, in both fibre or plastic wad. I tested the 28 gram No 8 shot with fibre wad; it shot a phenomenally well, with a total of 392 pellets on the 30-inch board, of which 189 were in the outer sector and a whopping 203 pellets in the inner. Perfectly even, dense and well spread with this load and ½ choked barrel.

Hats off to Benelli for producing a radical looking and designed over and under shotgun. It has all the flair one would expect from Benelli with individual looks but with superb handling characteristics. It points superbly, is very light to handle as well as felt recoil and the solid locking action, drop out locks and carbon fibre rib are great added bonuses.

I love the ejection system and personally love the looks, and as far as the way the 828U shoots, the pattern boards speak the truth and this baby shoots!