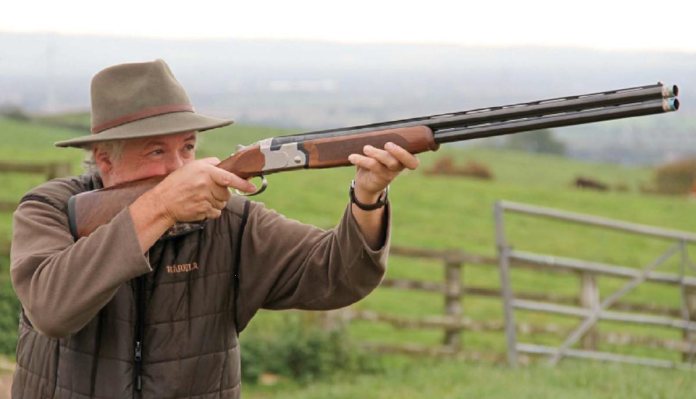 The 686 series of shotguns for Beretta have been their mainstay shotgun that serious shooters gravitate to. Its progressive design has proven its worth over the years for all types of shotgun shooting, ranging from clays, rough shooting, game or wildfowling. Today, we had the Evo Sporting version, which had a sporting stock design with micro core recoil and fitted with a Schnabel forend and extended chokes and Beretta’s modern ellipsis engraving design.

This model sports either 30- or 32-inch barrel lengths and is fitted with Beretta’s High performance Opti chokes with an extended length, ideal for this Sporting model. You have a wider, 10mm rib and fully sporting stock design, so the Evo handles perfectly in the shoulder and does not feel top heavy at all. The action has the muted coin type finish, with Beretta’s ellipsis engraving to enhance the looks. This model is designed to perform on the Sporting Competition clay grounds, but I can see people dual rolling it for extended pigeon decoying too.

The overall design on this Sporting Evo model is as you would expect; it has a full feeling to it but also has a perfect balance. You have a 14.25-inch length of pull to it and a standard drop of 36.5-7.5mm, making a near perfect head alignment to the rib. It feels very comfortable and natural to shoulder and does not need any adjustment when shouldered, which is the ideal situation with any shotgun; point and shoot, over complicate it and you miss.

The rear butt section has a full pistol grip but with no palm swell to it and its slightly upward rake gives a more hands upright position, which I like. It gives a fatigue free stance and again allows a good balanced feel to the Evo. The butt has a fuller form, giving some more weight to it and thus equals out the longer barrels on this model. To finish off, there is a micro core recoil pad that is a soft plain black rubber colour and dimpled for grip but there’s a smooth top edge, so it shoulders without snagging.

The forend is slightly longer than normal, with a classic Schnabel forend tip, further enhanced by some nicely cut chequering adorning both sides for a good portion of its length and a small panel underneath, around the forend release catch. Overall quality of the walnut used was very nice on this example, exhibiting some deep colour and figuring that had that warm glow from the oil rubbed finish. Left-handed versions of this model are available.

A single block of steel is precision-machined to form the 686 actions and then Beretta use their own blend of heat treatment to strengthen and increase durability. Berettas are famed for this and these 686 actions are designed to take sustained fire without breaking or loosening up.

Beretta use a side locking lug arrangement that rebates into the lowered receiver and are secured via twin protruding bolts from the action face. This has the advantage of a low profiled action and tapered wear built in to the locking bolts, so that after thousands of rounds they still maintain a tight action. The barrels pivot on twin pins sited in the front action walls and this gives a nice smooth opening to the action, with no binding at all.

I like the finish, which is a coin type finish to the action but has a bit too modern engraving for my tastes, but suits the sporting theme. These are Berettas elliptical or ellipsis swirls and radiating semi-circles to the action sides with more to the escutcheons. To finish off, is a gold accented 686E logo to the action side.

The top lever has elliptical lines for adornment to match the action sides and the top half of the lever is grooved for grip.

There is an auto safety system, so that as the action is opened, it automatically sets the safety, which is lozenge shaped. Within this is the barrel selector with a raised serrated button that shows one red dot for the bottom barrel and two red dots for the top barrel by moving right to left. The trigger is gold washed and thin and smooth with a positive feel and light, I think for a shotgun, weight of pull.

This is an inertia system, so the recoil of the first shot sets the second barrel but with an unloaded gun putting the safety on and off can fire the second barrel if desired after pulling the trigger on snap caps.

Barrel are available in 30- or 32-inch versions and I had the 30-inch versions, but both are 3-inch chambers and have a proof to 1420kg pressure. This model came with additional chokes of the extended Opti Choke system, which have an extended cone section that ensures the shot column is not pinched as it passes through the choke and this translates to a far better distribution of shot and therefore more consistent and dense shot pattern down range. These are colour-coded, which is an excellent idea to instantly see what’s fitted.

These barrels made from Beretta’s own cold-hammer forged steelium material, which is an alloy providing lightness yet strength and thus contributes to the fast handing properties. The bores are enhanced for maximum durability by being chrome-lined.

The rib has a full serrated width and is 10mm wide with solid construction up to the forend and then six vents underneath thereafter to the muzzle. The middle rib between the barrels is vented all the way from muzzle to monobloc and you also have some nice jewelling on the monobloc sides. The ejectors were well-timed and positive, so a quick reload is no problem at all and the overall finish is a nice bluing.

The 30-inch barrels certainly give you more sustained swing on a clay or bird as would the longer 32-inch version. The extended Opti chokes also really help in uniforming patterns and allowing the pellet column to breath and not bunch together and thus deform pellets, which causes sparse patterns. This Evo shot some very nice even patterns as seen in the pattern board test.

I fitted ½ and full chokes and set up pattern boards at 30-yards and patterned on ½ choke to see the average shot count and spread between a variety of cartridges. Also of note was the lack of perceived recoil to the shoulder and your face was also well-cushioned from a correct fit for me, even after the extended test period.

I selected an array of typical 12-gauge fayre for testing, these included:

NSI UNO Prima This is a sporting load with a red case and plastic wadding and loaded with a six star closure and high brass rim. I had the 28-gram or 1oz load with 7.5 shot size, so good for clays.

These have always shot very well for me, especially in the 20-gauge version. This load shot a nice even spread with a few holes but not too bad and had a total of 213 pellet strikes to the pattern board. I had 149 pellets to the outer sectors for a good fringe pattern and the inner 15-inches had 66 pellet strikes.

Eley VIP Sporting This case is designed specifically for the standard and FITASC sporting layouts and clays. It has a high brass shell and is loaded with PSB+ powders that deliver fast shot speeds and smooth consistent acceleration. Recoil is mild.

I tested the 28-grams, No. 7.5 shot with fibre wad and in keeping with the Sporting genre of the Evo, these VIP sporting loads proved a great choice. Eley have perfected this load for consistent and even patterns; so, if you are on line with that clay, it’s going down! I had, with the ½ choke, a healthy total of 253 pellets spread with a dense 85 pellets to the inner sector and well spread 18 pellets to the periphery. A great all-round load that will keep your average score high on the sporting layout.

Eley Superb This is a cartridge designed to be good across the whole broad spectrum of clay shooting. It has light recoil, good choice of shot size that is colour-code printed to the new silver case, so you can instantly recognise which case is which.

I used a 28-gram load of No. 7.5 shot size of high antimony in fibre wad but with differing powder to each to achieve a hard-hitter down range, not on your shoulder.

Again, a good clay load for consistent results. This Evo actually shot these slightly low right with the ½ choke but spot on with the full choke, just shows. I had a total of 221 pellet strikes with a sparser 53 inner 15-inch circle hits but 168 outer hits.

I am not a clay or sporting clay shooter, but my eldest son is and on the clays at Guy Bond’s GB Shooting range the Beretta was breaking, in fact dusting, clays with boring regularity.

Well-made and dependable, with Beretta’s build quality, a shotgun whose extended choke system does make a difference on the clay grounds.