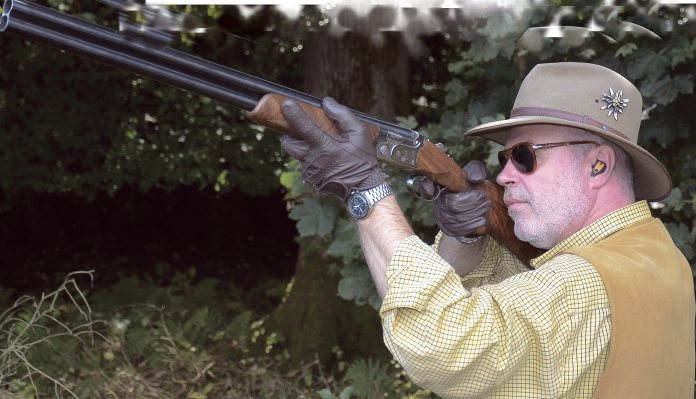 Head out onto day’s walked-up with a group of friends, and I guarantee there will be at least a couple of well-used Berettas amongst the guns in use. Reason being that, whilst there’s a vast selection of makes and models out there, Italy’s most famous brand still holds considerable sway. As a rule, no matter what you ask of a Beretta game gun, it’ll deliver. Whether its formal driven shooting on a Saturday, shooting big bags of pigeons from a hide, crow shooting during the week, bunny bumping of an evening or clays on a Sunday, a Beretta 12-bore will always deliver.

So when a new Beretta game gun makes an appearance, it’s something to take note of, since there’s already a goodly selection of them. From their entry level Silver Pigeon 1 all the way up to the bespoke SO10EELL, each and every part of the game shooting market is more than well-catered for. However, in true Beretta tradition, whenever they launch a new shotgun, two versions will invariably appear; which meant as soon as the 692 clay-breaker surfaced it wouldn’t be long before the field or game alternative broke cover. So, true to Beretta form, here it is: the 690 Field III 12g, an over- under that combines all of the Italian maker’s latest technology with the traditional traits of a game gun in a package that financially genuinely astounds.

Whilst there could at some point in time be a lesser model, the new 690 Field hits the UK in Grade III form; the quality and looks of the semi-oiled stock and forend being exceptional. Packed in a fitted Beretta case and complete with a full set of extended, flush-fit Optima HP chokes, it’s the 690’s appearance that impresses – the walnut very nicely grained, the visual attributes, fit and finish is exactly as you’d expect of a Beretta costing twice as much. Fitted with one of Beretta’s new style butt pads, this soft rubber slim line pad is far more capable than many thicker examples of keeping recoil at bay whilst maintaining the looks of a traditional game model.

The game stock has been conceived to ensure the 690 handles. With two panels of fine-cut checkering along each side, the one slight concern is the slenderness of the grip. Answering a variety of comments that their game gun grips are at times a little on the bulky side, Beretta have rather gone the other way with the 690. But whilst the slim profile might at first feel a little different from what might have been expected, like the rounded, self-adjusting forend the grip has been conceived to ensure the 690 remains malleable and mobile between the hands.

Using Beretta’s latest roll marked engraving, the inertia driven steel action is profusely decorated. Semi-bright in finish, rose & scroll, pheasant and partridge cover every available space, the hinges, side cheeks, trigger- guard and top-lever all receiving equal amounts of ornamental attention. Interestingly, instead of the usual stippling, the engraving around the fences not only enhances the 690’s looks it also ensures any potential glare or heat shimmer is kept at bay in a far more stylish manner.

Featuring Beretta’s familiar shoulders that extend from either side of the top chamber, locating into the cut outs either side of the edge of the action, the lock up is the usual Beretta system that has defined the 600 Series. Extending from either side of the action face, as the gun closes the two pins slide forward, ride over the tops of the ejectors as they start to retract and lock firmly into the recesses situated within the aforementioned shoulders. Clicking firmly into place as the top-lever swings back across, whilst the 690 action is to a degree all new, Beretta are to be congratulated for retaining the locking mechanism. It works and works well, so a case of ‘it wasn’t broken so they didn’t fix it’. What I’d fix from my own point of view is the auto safety – stiff to operate in the case of the gun on test, my first move would be to have the auto part disengaged. I know it’s the clay shooter in me, but auto safes annoy me.

Another plus is the non-adjustable trigger-blade, specifically the fact Beretta has elected to keep the gentle curvature trigger silvered, proving that the ‘less is more’ philosophy works. So instead of the usual, slightly crass gold plating that invariably wears away, the trigger will, like the rest of the 690’s action remain elegant no matter how extensively the gun is used.

Made from Steelium, Beretta’s latest wonder-metal, the monobloc barrels are in this case 28-inch swage into 3-inch chambers, a solid mid- rib joining them together with a low 5-7mm cross-cut vented top-rib and small silvered bead running along the upper tube. Interestingly, given the length of the Optima multi- chokes, the gentle muzzle flare tends to be overlooked by virtue of the fact it runs rearwards for 31⁄4-inches, fooling the eye into seeing nothing but straight profiled, almost fixed choke barrels.

Physically the 690 weighs in at 7lbs 2oz with a balance point directly beneath the hinges along with an overall length of 453⁄4-inches. Drops at comb and heel are definitely of the European game gun variety the both measuring 1 13/32-inches and 2 5/16-inches respectively, emphasised by the fact you also get a set of sling swivels in with the accessories. Trigger- wise the crisp 6lbs 1oz is reached by a 14 13/16-inch length of pull, a dimension that should for most remain comfortable irrespective of the thickness of clothing the game season dictates as it progresses through the colder months.

Fitting Cylinder and Improved Cylinder chokes and loading up with fibrewad 28g Eley VIP Sporting, whilst the 690 wasn’t conceived as a clay breaker, 60 decent sporting targets allowed the gun to more than prove its worth, the Arrow Laser Shot already confirming the Beretta’s flat shooting nature. A few stands in, the 690 drifting easily from clay to clay, whilst the handling and the balance more than confirmed the gun’s ability to turn its muzzles from driven targets onto what would be fast jinking walked up game, ammunition choice is something you’ll have to take into consideration.

Known for their punchy nature, the fact the trigger had been pulled on a pair of Eley VIPs more than registered. And whilst the stock head and the 690’s angles ensure the recoil comes straight back into the shoulder and that shooting the gun over an extended period wasn’t uncomfortable, cartridge evaluation is to my mind something you’d need to take into account.

Think on this – I shoot clays with regulation 28g loads, but for game I, like many game shooters, tend to ramp up to VIP 36g, something I did when I took the 690 out for a late afternoon’s random pigeon shooting. Apart from tightening the chokes up to 1⁄2 and 3⁄4, the load size did make a difference to a degree. I dropped back down to 32g Grand Prix and 30g Pigeon loads and the result was a game gun that became far more comfortable and relaxing to shoot, and whilst the 690 isn’t a lightweight gun at just over 7lbs, some time spent patterning and matching loads will be a few hours well spent.

Common sense-wise this is something every shooter should do whenever they acquire a new shotgun and not just heaving the same old ammo down the barrels. In the case of the 690 you have at least one guaranteed starting point in the shape of the Optima chokes. These tubes throw one of the best patterns in the business plus the fact the 690 shoots exactly where it points due to the well-sorted angles and dimensions. By evaluating a variety of loads, just as I did with a selection of Eleys, you’ll arrive at a gun/cartridge combination that’ll allow both you and the 690 to shine.

After assembling the 690, taking in the looks, finish, quality and handling I’ll be honest and say I was surprised when I looked at the price. Be it 26-, 28- or 30-inch barrels, or a left- handed version, they all cost £2500. If UK importers GMK had told me the 690 cost £1000 more I wouldn’t have thought it over-priced, so impressive in every aspect is this game gun. Beretta’s 690 III Field is as nice to look at as it is to shoot, and is a 12-bore game gun that will, quite rightfully, carry the Beretta name forward as still the best all-rounder out there; the 690 some of the best value for money I’ve shot in a long time.