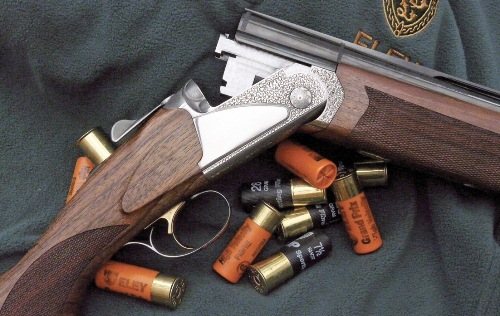 At last, a growing number of manufacturers have finally latched onto the concept that many shooters like to use the same shotgun for everything.

Equally, whilst we’re constantly informed that the recession is over, there are those who simply can’t afford a shotgun for this, a shotgun for that or a shotgun for the other. In other words, their sole shotgun does everything, the benefit being that the shooter becomes fully familiar with how their one and only shotgun feels and handles all to the benefit of their shooting.

But while many of the bigger, more expensive makers are now introducing new cross-over models with endless fanfare and the attendant price tag, Italian manufacturer Bettinsoli has quietly launched their range of Crypto shotguns, a new model that embodies everything shooters have come to expect from this small maker, plus a little bit more.

Open up the Bettinsoli-branded case and you’ll find the company’s usual comprehensive package of gun and accessories. Complete with noticeably stylish walnut, the straight grain and detailing immediately lifting the appearance of the new model, a full set of flush-fit choke tubes are supplied along with two additional extended chokes in Full and Modified. Screwing into the muzzles in the usual fashion, these also add 2-inches to the barrel length, their twofold purpose allowing the 12g Crypto to take on more trap orientated targets along with a more wildfowling orientation. In addition to the standard 17mm design recoil pad, a slimmer 11mm soft recoil pad and spacer also allows the shooter to alter the length of pull within minutes to suit thicker clothing or for a more slightly built shooter.

Adding both to the Crypto’s looks and handling, wide panels of checkering have been cut into either side of the broad span grip with three smaller sections detailing the stock neck as it runs into the top tang.

Slightly finer in appearance and feel, two matching sections of checkering run along both sides and the underside of the forend, Bettinsoli still insisting on the Schnabel design, although in the case of the Crypto this now old-fashioned style isn’t quite as pronounced.

In the case of the 12g gun on test the gloss black 30-inch monobloc barrels swage into 3-inch chambers, Bettinsoli’s usual strong and well-timed ejectors running either side.

Topped off with a stipple effect 7-10mm vented tapering rib and green high visibility bead, the mid-rib employs almost imperceptible vents, a visual compromise between clay and game to a degree, from certain angles the central rib actually appears solid.

A design Bettinsoli have employed for many years and over many of their guns, the Crypto’s mechanical boxlock action has become, in many ways, the trademark of many of the Italian makers. Reason being, this time-served pattern is capable of delivering strength, reliability and, within reason, simplicity to a level it hardly ever goes wrong. Where Bettinsoli has moved their take on the design forward is in the ornamentation.

A truly subtle compromise between a competition gun and its game shooting equivalent, a gold inlaid snipe on the base of the action is surrounded by tight scroll work that extends around the forward portion of the sides, hinges, forend irons and top tang whilst a raised plain panel extends from the stock head echoing the design of the woodwork, the neat stippling of the fences enhancing the rest of the ornamentation. Complementing the action’s insets, apart from the engraving of the Crypto’s name, the oversized trigger guard houses the nicely curved gold-plated but non-adjustable trigger blade, both units wellsized to ensure a gloved finger has ample room to move.

If I had one criticism of the Crypto, it’s the manual safetycatch. Plain black and, to my mind, slightly out of place in comparison to the rest of the gun, it rather feels like it’s been lubricated with sand. And whilst my preferences are for manual safeties, I often elect to change the barrel order dependant on the targets. And given you have to apply the Crypto’s safety to achieve this, the less than smooth operation was a cause for concern. Granted, removal of the stock and a quick clean and lubrication would more than likely solve the fault. However, something as minor as this shouldn’t actually occur given modern machining methods and supposed quality control.

A moment with the Arrow Laser Shot confirmed my initial thoughts that the Crypto was a flat shooter, something it once again confirmed when the first two shots were fired. In total the gun weighed 8lbs 2oz with an overall length of 47-inches and a balance point about 2-inches in front of the hinges, the slightly weight forward attitude sitting the main mass of the gun in the lead hand which in turn translated into a gun with a smooth swinging attitude.

Drops at comb and heel measured 1 9/16-inches and 2 3/8-inches with a comfortable 14 5/8-inch length of pull to the 5lbs 9oz breaking weight trigger, the Crypto as a whole is a comfortable gun to heft and handle.

Interestingly, where Bettinsoli have also been able to combine the two types of 12g into one is in the feel, the Crypto feeling like a slightly heavier game gun whilst maintaining the sensation of an average weight competition gun, once again highlighting the maker’s understanding of how to amalgamate the two styles.

Shooting in what for me was reverse order, it was a late afternoon on Huntroyde’s crows that gave the Crypto its first chance to shine. Choking ½ and ¼ with a box of 36g Eley VIP Game filled with 4s, whilst two lived to fight another day, three crows, one jay and a magpie all succumbed to the Crypto’s accuracy, leaving me with a feeling of positive anticipation for the 100 bird clay shoot that awaited a day or so later. Changing to ¼ and Cyl along with a goodly supply of 28g VIP Sporting this time filled with 7s, after the first three stands I was just two birds away, the resultant misses certainly not the Crypto’s fault.

Seven stands later and in excess of a hundred rounds down the barrels, whilst the gun had worked hard I felt like I was still to start. Whether it was the more powerful game load or the slightly soft competition shells, the Crypto ironed out all but the last vestiges of the recoil. At all times it remained comfortable, controlled and stable to shoot, the swing smooth whilst even demanding targets failed to upset the gun’s equilibrium.

Interestingly, whilst the Crypto attracted a variety of positive comments, especially in respect of the looks, most were surprised to discover it was a Bettinsoli, proof positive that this Italian maker has significantly upped their game and the Crypto’s aesthetics were a significant step forward for the company. And, shooting wise, once again this new design has redefined Bettinsoli’s position within the industry, the Crypto is a gun they can be rightfully proud of.

Price and configuration-wise, once again Bettinsoli have demonstrated they’ve done their homework. Available in both 12g and 20g with 28-inch and 30-inch barrel lengths, the Crypto Luxe as tested in either gauge will cost you £1295 or £1320 for the left-handed version. Should you consider the 8lbs 2oz weight of the standard Luxe model a tad too heavy, the Crypto Lite, once again in either gauge or barrel lengths, will set you back £1395 or £1420 for a left-hooker.

Without doubt the Crypto is an accomplished clay breaker, but where it will be interesting to see the results is within the game shooting fraternity.

Game guns used to shoot clays aren’t anything unusual but competition 12-bore used on pheasants have, as a rule, been frowned upon apart from guns that have been adapted. Usually long-barrel trap guns that have been physically toned down and the ornamentation increased, the purpose being to bring down towering pheasants.

The Crypto looks like a game gun without any modifications, the wide rib harking back to the days when American shotguns were fitted with these.

But it also looks like a classy clay breaker and behaves like one. So whilst others decide whether it is or whether it isn’t, those who’ve bought their own Crypto will continue to enjoy hitting birds be they feathered or bright orange.