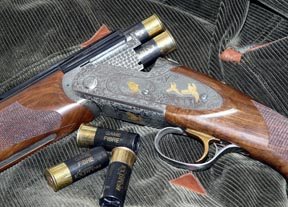 Most game shooters aspire to high grade shotguns; with sideplates and fancy engraving, which very much says it all; perhaps… But finishes such as these usually cost serious money, which is something not all of us can afford. It seems though that Bettinsoli haven’t heard that upmarket adornments cost more, as their new Diamond Line Deluxe 12-bore still weighs in at less than a grand.

For the asking price of £925 you get: a plastic case, full set of chromed flush-fitting multi-chokes, a thicker spare recoil pad, small screwdriver and a selection of compartments for accessories. This does seem very generous at under a grand when you also take into consideration the sideplate 12-bore that’s contained within. In fact you wonder how do Bettinsoli do it for the money?

One - the Diamond Line is nothing exceptional, it’s a typical Italian, O/U 12-bore built to a tried and tested design that will give years of trouble free service. So much so, Bettinsoli warrant their shotguns for 10 years.

Two - the build, finish and overall looks elevate the Diamond Line into a category the company has more or less created for itself.

Lustrous black and well struck, the 30” chromed bored barrels boast a broad, wide slot 10mm cross-cut rib mirrored by the similar mid rib. Crowned by a small brass bead the tubes culminate at the opposite end with 3” chambers. A comfortable, semi Schnable forend connects the barrels to action, engraving adorning the latch and irons. Nearly a perfect match, the timber exhibits an excellent fit and some good quality, semi oiled, straight grained walnut.

Setting the Diamond Line apart is the quantity and quality of the decoration. Positively encrusted with well defined rose and scroll that extends around the entire action, fences, tangs and top-lever, with gold inlayed pheasants, woodcock and duck completing the scenes. Remarkably detailed given the lack of actual relief, it’s true to say that the effect is at times dependant on how you allow the light to catch each plate whilst the actual physical size of the surfaces would benefit from being fractionally enlarged if only to lessen their faux image.

The non adjustable trigger blade benefits from a surface treatment of inlay matching gold along with a subtle diagonal cross hatching. Seemingly minor, the benefit of this fine, if ostensibly superficial attention to detail adds that final modicum of friction between blade and finger when a thicker than usual shooting glove is worn.

Like all Bettinsolis, you’ve always to remember that their chromed bores are tight, the complete opposite of the current back boring trend. To that end, shot around Rishton CS’s Sporting and Compact layouts with Express World Cups and Supreme Game loads, wider chokes than usual were the order of the day, with ¼ and improved cylinder being ideal. But where the Diamond Line is unusual when compared to similar game guns is that it feels big, the 8lbs 4oz weight combined with the long barrels and wide rib adding to the sensation.

In the hands, apart from the sporter stock, the Diamond Line has the distinct sensation of a trap gun with the mass shifted a little rearwards. Now bear in mind the recent trend to ‘sporterise’ trap guns for high driven birds, or one of the other famous Italian brands that charges small fortunes for 12-bores with characteristics such as this Bettinsoli.

Slow to start, once the initial momentum has been instilled into the gun, this Bettinsoli displays one of the smoothest almost cushioned swings in any direction you care to ask of it. But where it really shines is on high, driven targets. Even with the wider chokes still fitted, the Diamond Line virtually plucked birds out of the sky - the higher they were the better. Interestingly the 14¾” length of pull, 6 lbs trigger weight over both barrels and slightly oversized stock dimensions of 1 7/8” and 2 3/8” combined to enhance this Bettinsoli’s nigh on laid back approach. From my point of view, the only two negatives were the rather asthmatic ejectors and the fretwork top lever that although decorative, can be wearing on the thumb.

There’s a well known French artistic effect called tromp l’oeil which translates into ‘deceiving the eye’. Well if you want to see the impression translated into shotguns; take a close, hard look at the Diamond Line Deluxe. OK, the size and inlaying of the sideplate could be better but the overriding factor you’ve to continually remind yourself of is that the Bettinsoli cost at least half the price of the competition, a mere fraction when compared to a purpose built, high bird shotgun.

No matter how you evaluate the Diamond Line Deluxe, you just can’t deny it looks the part, is well built and comes complete with a guarantee hardly any other manufacturer dare offer. As always one of the most complete packages currently on offer, whether as your first game gun, general all – rounder or something to actually move up to, Bettinsoli’s Diamond Line Deluxe can’t in all honesty be faulted.