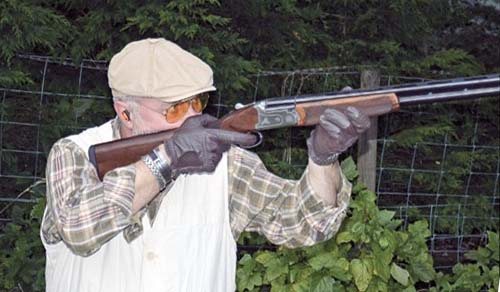 It definitely came as something of a surprise when I discovered that the last time I tried a new Bettinsoli was way back in 2011 when the original 12g X-Trail made its appearance.

The irony is that this new 20g is, once again, a new X-Trail, a boxlock over-under that, from the moment you hold it, personifies a Bettinsoli.

Like the shotguns that preceded it, this 20g is proof-positive that every aspect that went before has been continued, from the looks, feel, handling and price; Bettinsolis offer the shooter everything that makes an Italian shotgun combined with genuine affordability.

Whilst the company has, for whatever reason, seemed to have been relatively quiet in comparison to others, Bettinsoli’s existing range has more or less remained the last Italian bastion against the Turkish onslaught. The other interesting Bettinsoli facet is that the maker’s shotguns are designed for the game shooter, the guns’ combination of European ‘wing- shooting’ balance coalesced with driven shooting attributes.

So perchance you’ve never handled a Bettinsoli? The new 20g X-Trail could well be your perfect introduction to a range of shotguns, the maker of which embodies the true artisan ethos of the small, dedicated gunsmith.

Like most Bettinsolis, the X-Trail comes complete with a soft cell padding travelling case and a smaller bright orange case that contains a full set of flush- fit choke tubes and key. The gun itself couldn’t have been made by anyone else, the X-Trail as a whole centred on a bright steel boxlock action. Decorated with light rose and scroll bordering and a selection of pheasants, partridge and snipe, as usual the engraving is of a light, simplistic nature. What is unusual is that the ornamentation that runs around the fences and along the top tang, top lever and trigger-guard has been cut to a deeper level. This to a degree tends at times to visually override the main action surfaces.

The gold-plated trigger blade, although non- adjustable, is long and curvaceous, whilst I’m pleased to say the oversized safety is of the manual variety, along with the fact that the top lever is now solid at the thumb pad, Bettinsoli having elected not to use their usual filigree, fretted style that, whilst looking good, was at times uncomfortable against the finger. As always the 30-inch barrels are finished in a rich, gloss black and swages into 3-inch chambers. A 7mm cross-cut vented top rib runs the entire length and is complemented by a narrow slot mid rib, configured to look solid, therefore maintaining the 20g game orientation.

The slender forend, locked onto the barrels with an engraved, extended latch, is heavily checkered so ensuring the shooter has a solid purchase even when the leading hand is twisting round in an effort to connect with a difficult bird. Two large contoured panels of checkering wrap around the broad, open radiused grip, whilst a small asymmetrical inlay of checkering is located just to the rear of the top tang, designed to give the span between finger and thumb to retain traction. An unusual if small addition, but one that after shooting the X-Trail will be much appreciated, especially when shooting in inclement weather. The game stock and thick rubber recoil pad are well shaped, as is the narrow comb.

Physically the X-Trail tips the scales at 7lbs 2oz with an overall length of exactly 47-inches. As has become expected of all Bettinsolis, the dimensions have been conceived to suit the vast majority of shooters, with drops and comb and heel of 1 17/32-inches and 2 5/16-inches combined with a comfortable 143⁄4-inches length of pull to the 6lbs 1oz average break weight trigger. If comment had to be passed it’s that, to ensure the mechanical action switches from barrel to barrel, the blade must be fully released. A trait that quickly becomes the norm, it’s when looking for a fast second shot that the shooter will at times forget to let go any pressure against the blade. Similarly, the trigger has a noticeably mechanical feel, although any decent gunsmith will be able to eliminate both of these small anomalies after a few minutes work.

To shoot the new 20g X-Trail demands the shooter develops the most delicate of touches. It’s not the lightest 20g you’ll ever hold, the point of balance 21⁄2-inches in front of the hinges, the weight forward attitude of the gun means, initially, you’ll swing through your target a little faster than you might have intended, the mass firmly located within, in this case, the left hand. This necessitates a slowing of the swing and the collective result is that mounting the X-Trail, even for fast moving targets, is a more relaxed affair, the leading hand able to guide the muzzles with greater precision, the back hand bringing the butt into the shoulder.

After an initial session with the Arrow Laser Shot confirmed my initial supposition that the 20g would shoot flat, three rounds of skeet using 1⁄4 and Cyl chokes plus a few boxes of 21g Eley CT20 were followed by an afternoon on Huntroyde’s crows using 30g Eley VIP, the chokes tweaked up by one point per barrel. The end results were as anyone experienced with a Bettinsoli would expect.

One point that has to be mentioned was the fact the X-Trail was stiff to open, something that remained after 120 or so shots had been taken with the gun, although it did ease ever so slightly. Nothing to be especially concerned about, a few hundred or so more shells through the gun would have eventually allowed the X-Trail to relax a little more, opening it wide enough to deploy the strong ejectors and capitalise on the wide gape did require a degree of effort though.

With the fashion for 20g game guns to have 30-inch barrels like the X-Trail, the overall length, weight and balance come together to produce a gun that is easy to handle and comfortable to shoot. As an early season partridge gun or a companion around a well- stocked rough shoot, the 20g X-Trail is ideally suited, whilst fitment of the tighter chokes will allow the gun to demonstrate as to why the 20g is starting to become the gauge of choice for many driven shooters. By taking the classic butt against the hip stance, with muzzles pointing skywards, the barrel length, excellent patterning and weight forward attitude means the X-Trail will be quickly onto that high, screaming pheasant, the gun’s pendulum effect balance when vertical ensuring the gun swings through with consummate ease.

Where Bettinsoli’s X-Trail genuinely wins out is the price – the gun is all yours for £790. There’s even a left-handed version that, although carrying a slight increase in price (as do all left-handed models), will still significantly undercut other similar Italian-built guns. But whichever shoulder you shoot from, if you’re on the lookout for a nice 20g game gun that can hold its own around the clay layouts, or have never handled a Bettinsoli, then the new sub- gauge X-Trail could well be the way to go. Add in a three year warranty, something that confirms Bettinsoli’s confidence in their products, and the X-Trail 20g deal becomes even sweeter.