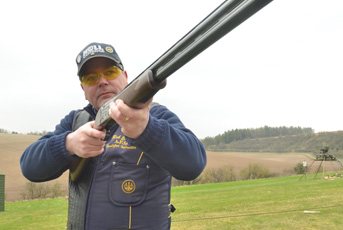 Often a gunmaker tries to move themselves out of their established market place, sometimes with disastrous results. However Bettinsoli who have been making good value and quality product for many years, know what they are good at! With the X –Trail they continue to offer a sensibly priced shotgun for today’s cost conscious shooter, hardly surprising then that the marque produces more than 10,000 guns a year.

Taking the Bettinsoli out of its robust ABS case, the first thing I was struck by was the colour case-hardening on the action. It is certainly distinctive and for a gun at this price done to a standard that you might expect. This style is very much a personal thing, I prefer silver actions, though can appreciate the beauty of a Purdey or Holland decorated thus. What this distinctive look does is to mark it out as being different to other offerings in the crowded budget sector and from a marketing point of view this certainly makes sense.

The X – Trail shows 30” tubes, which are more game-orientated, though it is certainly capable of breaking a clay or two if required! The action is similar to most other Italian guns reviewed in recent months. The barrels have bifurcated lumps which hinge on stud pins, locking courtesy of a full width cross bolt engaging in a bite beneath the under chamber mouth. Give the Italians their due; if it ain’t broke don’t fix it and quite sensibly they prefer to use a proven design rather than re-invent the wheel just for the sake of it.

It isn’t exactly what you might call low profile but it looks well proportioned and everything seemed to work in a smooth and positive manner. The only gripe being that it still had that new gun stiffness that required a good amount of effort to open and close. However the solid top lever is a definite improvement from the cut-out versions found on previous models, certainly feeling more robust and giving a better final finish.

The single trigger is recoil-operated and fitted with a comfortable, gold-plated blade, which contrasts well with the case-hardened finish. The pulls are hardly what you would call delicate; approaching 5 lbs with a slightly draggy feel. However, they are comparable with other guns in this price bracket and for most people would be wholly sufficient. They could be regulated by a gunsmith if you wanted them set more to your personal taste. The manual safety uses the same square blocked strap as others in the range and certainly feels easy enough to use. Regular game shots might find a safety of this type somewhat strange in use.

Barrels look nicely finished though again I use the caveat for a gun at this price!  Having said that; I have seen guns costing far more that struggled to match them. Thin wall multichokes are fitted thus negating any muzzle flare that can prove distracting to the eye whilst shooting. The 7mm rib certainly looks robust with plenty of resistance to glare thanks to its machined surface. Both mid and upper ribs are vented and at the muzzle is a simple, brass bead, undoubtedly the preferred solution for a field gun. As you would expect the barrels are steel proofed and in this instance 3” chambered so allowing it to do duty on the foreshore or when flighting inland. The ejectors performed more than adequately, the spent cases being thrown well clear by the coil springs.

Built To A Price

Guns in this sector of the market are built to a price, and for manufacturers such as Bettinsoli the hard part is striking a balance between giving it showroom appeal and making it shoot well. The X – Trail’s looks will not see it on a Milan catwalk but that’s not what it’s about. The guns ethos is to offer an efficient, budget-priced sporter and in that respect they have succeeded. The woodwork is solid enough and the chequering looks as though it would facilitate a positive purchase in all conditions. However, the colour of the timber is quite plain without a great deal of pattern in evidence. The forend continues the theme though feels comfy enough when in use and is finished off with a very subtle semi Schnabel tip.

The colour case-hardened is not to my taste, thankfully Bettinsoli have resisted the temptation to over engrave it. With the name X-Trail, Bettinsoli and a single woodcock decorating the underside while a partridge adorns one action side and a pheasant the other. Engraving is always more difficult to see clearly on this type of finish and although things have been kept to a minimum, less is definitely more in this case. Having said that I am sure it would look far better if it was a conventional, silver-actioned version.

Out on the range the gun certainly functions well enough; with the standard stock dimensions fitting most people straight off the rack. The sculpted rubber pad negotiating the journey from gun down to mounted without any hints of snagging. Don’t expect it to have the poise or balance of a gun four or five times the price, but if you point it in the right place you still get the job done. That’s the thing with budget guns; they do most things just as well as their more expensive cousins, they just need a little more driving. Once used to that, and acclimatized to the trigger pulls there wasn’t a target at Wylye immune to its reach, ¼ and ½ choke seemingly where it was happiest.

So to sum up the X – Trail is pleasant enough to own and shoot, reliability for the brand is good and there always seems to be a market for guns of this type so the chances are that when it comes to resale time you wont find a shortage of prospective buyers. Enjoy it for what it is rather than be disappointed in what it isn’t and you will share many years of happy shooting memories. At this price there is little to touch it… now where did I put the keys to that Nissan?