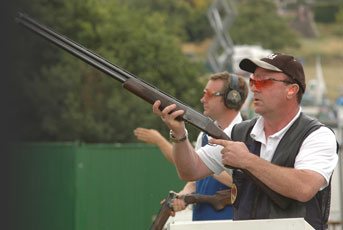 Blaser’s F3 has been in the UK for some years now and has gained real credibility on the competition circuit, with several top shooters making it to the winner’s rostrum. Seasoned Campaigner John Bidwell continues to be a leading light in FITASC whilst Richard King is always in the hunt at Sporting events and now Jack Thompson is using a High Rib F3 Trap to notch up some successes at DTL. The recently launched F3 Professional addresses many of the needs of the competition shot, allowing weight distribution to be perfectly set up to match the user’s needs. Whilst the rest of its comprehensive features have gained it many plaudits.

There is another market which continues to grow strongly in the UK and that is for smaller gauges. Whether for the game shot who fancies something a little different or for the Clay buster who prefers the reduced recoil. However the F3 20-bore is no lightweight as it copies its 12 gauge sibling in weight, balance and size. So allowing the swap from 12 to 20 and back again with ease as both barrel sets are fully interchangeable.

On test is the Attaché which has been launched at the top end of the range and is an exercise in understated elegance, its looks are clean and crisp without needing embellishment. The sides of the black, low profile, plasma vapour deposition coated action are flat whilst the fences are plain but purposeful. Blaser have tweaked this gun to turn it into something special. The legend F3 is picked out in gold which has been hand inlaid, more gold being used for the barrel selector switch, safety catch and trigger. As Rupert Haynes of importer Open Season told me when picking up the gun “The F3 Attaché is aimed at serious competition shots and experienced game shooters who prefer their results to do the talking, it’s no poseur’s gun, it’s about efficiency, reliability and mechanical integrity, if you want a truck load of bling then look elsewhere”

Open up the F3 and its internals are unchanged! For those not familiar with the workings it would be fair to say that they are very different to a conventional boxlock design. Blaser have used their rifle experience to endow the F3 with a very fast lock time by employing hammers that operate on a horizontal plane along with firing pins perfectly aligned to the axis of the bore. The hammers are powered by coil springs which run in enclosed tunnels meaning that if a spring breaks the gun will continue to shoot. Barrel lock up is provided by the lump locating in a cut out section of the action floor and in the unlikely event that the gun ever shoots loose then the lump itself can be easily replaced with the use of a hex key.  Another piece of intelligent design by the boys at Blaser.

The single selective trigger is driven mechanically rather than by inertia which means no problems when shooting very light loads. Though an inertia block is built into the system to prevent double discharging. The selector is found just forward of the trigger rather than on the top tang and is operated with a front to back movement. The safety sits up on the tang where it needs to be and borrowing from Blaser’s rifle expertise it has been fitted with an intercepting sear to prevent accidental firing if the gun is dropped.

As you would expect; wood quality is excellent! Grade 7 timber being fitted to the test example and very finely figured it was with crisp chequering around the pistol grip which fitted in the hand very well. The Mk2 versions of the F3 addresses the concerns raised over the large radius of the grip on the early models. The recoil pad is comfortable and refused to snag on my skeet vest even when making a point of taking on targets whilst waiting in the gun down position though is a little on the flat side. The forend is slim and gently tapers towards the neatly located release button and is a big step forward from the previous Schnable version which was very much a love or hate affair.

The barrels are finished in a plasma nitrided, non-reflective finish that defies corrosion whilst the bores are chrome lined. The gold-coloured, Titanium nitride finished Briley chokes are flush fitting though extended tubes are available. The F3 has obvious flaring around the muzzles to accommodate the Brileys - something which is not unusual in competition guns though is not always to everyone’s tastes. Chambers are 3” and it’s supplied with three different lengths of Hiviz sight, each available in red, green and white.

Quick Off The Mark

The beauty of this 20-bore is there was little need to get used to the feel of it, the 8lb weight of the 32”gun imparting the steadiness and handling of a 12 gauge. The difference is the lock time which might not be perceptible, but the smooth and crisp trigger pulls at just over the 3lbs certainly were, quickly endowing the user with real confidence as to their consistency.

On a variety of targets the F3 seemed very capable, the weight meaning that it didn’t have to be ‘driven’ hard in the manner that some small bores require. I let others try the gun and it was soon clear that it was universally liked! The only negative comments from some was the lack of engraving, though as they admitted the aesthetics certainly didn’t affect their opinion as to how it shoots.

The new stock dimensions with a marginally higher comb (drop 1.5” at comb and 2” at heel) than previously, given it an altogether more sporting feel in the shoulder, the view up the cross cut rib with centre line was clear and in combination with the Hiviz bead inspired confidence and instinctive shooting. Recoil as you would expect was minimal with all loads, thanks to the weight and the patterns through the Brileys were superb. Gamebore 24-gram #8’s in conjunction with ¼ and ½ choke being more than enough to deal with any target thrown.

From Showroom To Gunroom

The Blaser philosophy is all about creating a modular system tailored to meet your needs and the Attaché certainly seems to offer that. As well as three different stock lengths (13.6 / 14.6 / 15.2”) and three different comb heights (1.5-2, 1.4 -9, and 1.6 – 2.2”) there is also a bespoke fitting service available. In addition to the already comprehensive features listed; the Attaché also comes with a stock weight system to enable you to fully personalise it to suit your style, which in conjunction with the barrel weight system (a no cost option) means that you can completely alter handling in minutes.

Depending on your chosen options the delivery time is anything from immediate to a maximum of 12 weeks and a set of 12gauge barrels can be added for £2,180 giving even more flexibility. It’s not cheap, but then nor is a high end car from BMW, Mercedes or Audi. It’s the quality that makes the gun what it is and if you take the F3 as one of the finest exponents of highly sophisticated, machine-led design and construction available then that price becomes a secondary consideration to the pleasure that owning an F3 can deliver!

Verdict
Cleverly designed and well put together in a way that only the Germans can. An exercise in simplistic elegance, that shoots sweetly and delivers results. Expensive but worth it!

We Reckon!
A design destined to be a classic
Smooth handling and low recoil make it effortless to shoot
Refreshingly a triumph of substance over style