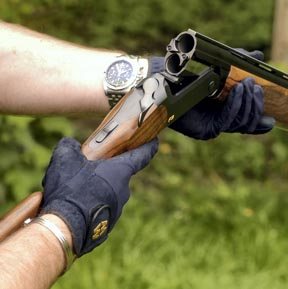 Importer Alan Rhone will admit that the first Blaser F3’s had more than their fair share of teething troubles. This and early availability problems had dire consequences on the gun’s reputation. However the model has risen to become well respected and the new F3 MkII or Professional is the result of this. In his own words Alan: “now has a product he can be justifiably confident in.” And after trying the new F3 Pro I have to concur.

Although shooting the F3 has been well documented in the case of this model it’s a case of what you can’t see that makes a significant difference, although on the range each single modification combines to produce a whole new experience. From the instant you open the new travelling case there’s the realisation that a lot of effort has been put into this upgrade.

To solve the design’s inherent sticking problem the angle of the bottom bite has been changed so eradicating the stiff, top – lever sensation. Inside the action, the sears, firing pins, cocking levers and ejector tippers have been changed and upgraded to enhance reliability. The most noticeable effect from the shooter’s aspect is more consistent strike weights and trigger pulls, the test guns broke at a consistent 5lbs 3oz on both barrels.

Still exhibiting the matte, micron-type finish and muzzle flare to accommodate the five Brirley Spectrum extended multi-chokes, the barrels have undergone defined improvements. The joint that fixed each of the tubes to the monobloc has been altered to eliminate the occasional rust problem, whilst the interior coating, honing and finish of the bores has been enhanced so removing the often visible rib post mountings showing through.

On the outside the familiar helical, cross cut 7-10mm tapering rib now uses interchangeable, Hi-Viz beads in a full range of colours but it’s underneath the forend that’s of the greatest interest. A fraction short of an inch behind the solid mid rib is now to be found two mounting blocks on either side. Corresponding to these are six, individual, sintered-tungsten weights, two weighing 2¼ ounces, four tipping the scales at 1½ ounces each.

By screwing them on in pairs around the locating pin, the initial 8lbs weight can be varied by up to 7½ oz, which alters balance and feel. The beauty of this is that it’s a process carried out by the owner, the simple torque screws allowing easy addition or removal until your perfect set up is achieved. Correspondingly four more weights can be added to the balancer bar located within the butt, although these aren’t included in the initial outfit. The end result, should you be so inclined is a shotgun that could final weight up to 9½lbs, all the while constantly variable.

Although Class 2 woodwork will still remain available on the other F3’s, it’s the standard Grade 5 of the Professional that once again lifts this version. Gone is the ‘dreaded Schnabel’ forend, to be replaced by a well proportioned, London patterned design complete with a neater, less obtrusive release button. A significant visual and physical improvement in itself, it’s the standard butt dimensions and profile that add to the feel of this Mk II F3.

The oft criticised palm swell and grip has undergone a noticeable radius reduction, whilst the nose has been increased and the undercut for the thumb eased considerably. Likewise, the comb height has been marginally altered to reduce the F3’s flat shooting characteristics. There’s now a new, soft rubber recoil pad, which complimented by a stiffer insert on the heel so eliminating the potential for drag on the ‘gun down’ disciplines. The end result is a more positive feel all round, which gives the Professional a completely revised physical sensation.

Irrespective of whether it was Skeet, DTL or ESP there wasn’t one of Coniston SG’s birds the F3 Pro couldn’t effectively accommodate - though two rounds of Skeet showed the need to make a minor modification. Initially I’d attached two of the 1½oz barrel weights in the rearward position. In the hands this felt more or less right, however, my mistake was the positioning to give a muzzle light feel, which I did not like. However, this illustrated the gun’s instant adaptability; as two minutes saw them repositioned at the front of the barrel mounting block and the balance was as near perfect as I could possibly wish.

Now weighing 8lbs 3oz, two details of DTL saw nothing more than a bird away on each whilst an 82% score during the afternoon’s competition was to my mind more than respectable. The one noticeable effect of F3 Pro's enhancement is how crisp and slick it feels from the moment you push the top lever to break the action to the instant the clay breaks. The gun feels faster, more positive in the execution of its functions, trigger response is quicker and mechanics are altogether more receptive. Likewise recoil, the sensation is nigh on dialled out, the angle of the head to action is as near flawless as you’re currently likely to find.

Although adjustable I elected to leave the trigger blade as per factory setting giving me a length of pull of exactly 14½” combined with a precise pull weight of 5lbs 3oz. If I could find fault it was that the comb was a tad to low. Literally only by a fraction, drop at comb and heel measuring an exact 1 9/16th and 1 7/8th, once underway though the 32” barrels still provided a more than acceptable muzzle to target relationship as my scores more than verified.

What you must remember though is that like my own F3, fully customised woodwork is always available, just contact Alan for full details and to arrange an appointment with one of Blaser’s Varistocks. OK it adds to the price but if you’re considering an F3 Pro, I’d heartily recommend you consider this option, which takes the fine tuning available to the nth degree!

Combined with the new London-style forend to the re-profiled palm swell, grip and slimmed stock head, the new F3 has become one of the most compliant Sporters you’re likely to pick up. Besides the secure comfort of the new fine cut laser checkering and forend, the butt dimensions gives the F3 a fluid sensation, a feeling of instant adaptability and motion within the hands.

Blaser along with the significantly important input of both Alan Rhone and gunsmith Erwin Peumans has resulted in a new series of competition shotguns that will more than make their mark at each and every level of the sport. Pound for pound the new F3 Pro comes in at a price that should seriously worry the competition, £4,400 pitching the Blaser directly into a section of the market others have, for to long, considered their own exclusive preserve.

Where the new Blaser also differs is in the fact that owners can upgrade their existing F3’s to Pro specifications, as the new action mechanism is transferable into the older chassis. Likewise, maintaining the F3 modular design, the new barrels can also be fitted along with the newly contoured furniture, a situation that ensures there’s no such thing as an old Blaser F3.

All I can say is that with the new high-ribbed, American Trap and luxury grade game models on their way, watch this space. Whilst I look forward to trying them, the rest of the shotgun industry should start to worry. Blaser it seems has genuinely come of age manufacturing shotguns you genuinely want to shoot!