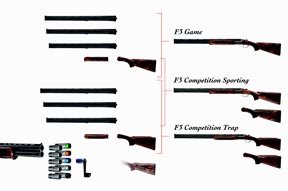 In the usual run of things I get shotguns in to test then send them back. However, this time it’s different as the new Blaser F3 you see here is mine. I was measured up for it at IWA 2006, the end result being it was built specifically to my needs and dimensions.

Where this F3 also differs in that its one of the new Titanium models, so comes complete with the now optional 32” barrels and a quasi – Monte Carlo stock that means it’s equally at home on any of the Trap layouts, Sporting stands, Skeet stations. And since the Blaser isn’t overtly competition based, it also serves as a near perfect driven pheasant gun. Technically referred to as the F3 Competition Trap, unlike many other similar shotguns, this F3 is more than capable of being all things to all men or women for that matter. What the gun does exude is style by the bucket full, just how I wanted it.

Now imported into the UK by Alan Rhone, the changes have come both internally and externally. OK there were some teething problems with the early F3’s, even the factory in Germany admitting that things probably weren’t all they could be. Similarly what you got for your money didn’t always equate to handing over a similar amount for one of the F3’s main competitors. It may not seem much but when you’re parting with a substantial four figure sum a full set of multi-chokes, accessories, hex keys and a fully fitted quality travelling case can and does make a difference. Deficiencies Alan Rhone was quick to rectify when he took over the UK importation agency.

Already voted as my shotgun of the year 2005, the new F3 continued this tradition by once again taking my top spot in 2006. However, by coincidence or not, the delay in mine actually arriving now means my model is one of the new Blaser pairing to have arrived in UK dealerships.

But since it’s now well over twelve months from the time we originally reviewed the F3 it’s probably worth back tracking over a few of the salient points. As the first shotgun to be designed and manufactured by Blaser, the company took the clean sheet of paper approach. Redefining how a smoothbore should be constructed, the action’s height is a mere 60mm whilst still maintaining the necessary strength, something Blaser achieved by incorporating a strong lock up plus the reliability of a full-width replaceable locking bolt. Unusually, the F3 also cocks both firing pins and ejectors on opening whilst the mechanical action reduces the number of springs plus the need for recoil to reset the trigger for the second shot.

Internally, the in-line horizontal strikers optimise kinetic energy and increase trigger feel whilst the two main springs run within steel tubes. This also means that the F3 will continue to function should a breakage occur. Where the workings now differ is that tolerances have been tightened whilst the coatings have also been improved using Blaser’s new TECN or Titanium Carbon Nitrating process.

Externally, unless you’re used to seeing F3’s, a cursory glance at the Titanium won’t actually indicate anything has changed much. However, once you see the new models next to one of the originals, you’ll immediately see the difference. The two new finishes are the black velvet of the Attaché, a name that’s synonymous throughout Blaser’s range of high grade take-down guns along with the enhanced and darker Physical Vapour Disposition (PVD) coating of the standard model. Both actions like the rest of the F3 now also benefit from PVD that counteracts the most aggressive acids and grease.

Barrel wise you can now opt for any length between 28” and 34”, the usual orange bead, gently flared muzzles and anodised coating still present. Choke wise, buyers can now select from a set of either flush fitting or extended examples whilst additional tubes cost £26 or £43 respectively. But with a full set now supplied buying more might seem strange. However many shooters including myself, prefer some of the in-between sizes such as 3/8th or an additional Skeet choke for multiple close-in birds.

Retailing for an off the shelf price of £2,895 the personalised stock adds another £705. Although this seems a considerable amount it soon comes into financial focus when you take into account the precision required. Designed by Hendrick Blazen, Blaser’s Varistock is one of the most advanced ‘try guns’ measuring devices currently available and unique to the F3.

An example of German exactitude, the smallest measurements, dimensions and drops can be minutely dialled in or out. In my case I was measured by Blaser’s CEO Bernhard Knobel but UK customers are advised to take a trip down to Alan Rhone in Wrexham. More than worth the trip since the journey will not only ensure your F3 stock is absolutely perfect but allow you to decide on the exact level and style of finish. Let me assure you the options are vast.

In the case of the F3 seen here, the stock is slightly longer than usual whilst my head positioning determined that a lower comb was required. The end result is faultless in measurements and looks, the grain of the ‘fiddleback’ walnut lifting the F3’s appearance just that fraction more.

Out and about on Coniston SG’s layouts it didn’t take long to reacquaint myself with how an F3 handles. The first apparent difference is that the gun virtually assembles itself, no need to try and locate cams or struggle to find the hinge pins. Secondly, and more than obvious, was that the F3 Competition Trap weighed in a just short of 8lbs. Great if the gun was to be used purely for Trap but a potential problem for certain other disciplines.

My early reservations were quickly dispelled. Two squads of DTL choked ½ and Full saw two more than passable scores whilst opening up the muzzles to ¼ and Cylinder resulted in an 18 and a 22x25 on the Skeet layout. What these close range birds proved was that although the F3 possesses mass, the balance allows for a smooth, controlled swing and even momentum coupled with a surprising ability to switch rapidly between fast opposing targets.

Confidence built and a trip to the high tower confirmed that even in Trap guise the F3 was one of the most competent all-rounders I’ve had the pleasure of using for quite a while. All I needed to do was ensure the correct chokes for the job were fitted, get in front of the birds and let the Blaser and Eley VIP combination do the rest.

I’ll admit that Blaser’s F3 isn’t a shotgun that’ll suit everybody be it due to weight, handling or overall feel. What I will say is that it’s a gun everybody should try at least once if only to see why more and more top shooters are making the move to these smoothbores. Equally once you’ve used a stock that’s been made for you; you won’t want to go back to a standard item. This is the first shotgun that’s been tailor-made for me and it’s been more than worth the wait. The F3 feels right from the moment I pick it up.

And it’s not just around the layouts that the F3 does exactly what it was designed to do. Two days driven pheasant around the Duke of Buccleuch’s legendary Bowhill Estate revealed the F3 abilities on towering cock birds and screaming partridge. Eley’s softer yet no less potent fibre wad game loads bang on target, proof positive of the F3’s versatility.

Irrespective of whether the F3 seen here was mine or not, I’d still be of the same opinion in respect of Blaser’s much improved shotgun. Poise, presentation, finish and the overall feel has moved forward to a degree that anyone seriously contemplating buying a top flight 12-bore for clays or game should ensure that if nothing else they take a close look at one of Blaser’s new F3’s. But it’s in this aspect alone that the Blaser sets itself apart. Since the entire modular system revolves around a single action, the F3 is both a competition and game shotgun. All you have to do is buy longer or shorter barrels and if you must, additional chokes, stock and forend.

Without doubt Blaser’s F3 is the most versatile shotgun the market has yet seen. The vague confusion over what it was designed to do lie predominantly with the dealers. Once they’ve got a grip of the F3’s concept and explained it to their customers, unless you need a very discipline-specific shotgun, there’s little reason to consider anything else. What hasn’t waned is the F3’s desirability. I’ve lost count of how many offers I’ve had to buy the Blaser. I wanted one of these since they were launched. If you want to own F3 could I suggest you call Alan Rhone since mine is definitely NOT FOR SALE.