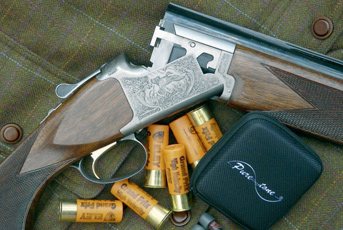 With the arrival of the B725 many Browning enthusiasts worried that the end could be in sight for the loyal B525.

But with the launch of the new B525 Game One nothing could be farther from the truth, this elder statesman of a shotgun still being one of the best you can get.

So much so the latest incarnation in game form is testament that the B525 is and will always remain one of the most enduring, reliable and robust designs of its type. Equally, like all lower grade B525’s, the new Game One represents good, honest value for money, the latest specification and finish far better than the Grade 1 designation Browning claim this gun to be.

Presented in one of Browning’s familiar travelling cases, the new Game One comes complete with a set of steel proofed flush-fit Inventor Plus choke tubes and key. Where the main difference comes between the previous model and the Game One is that the familiar hard plastic buttplate has gone, the Inflex recoil pad from the B725 taking its place. Inkeeping in looks where the plastic buttplate did absolutely nothing when it came to taking the sting out of bigger game loads and magnum shells, the Inflex pad makes the shooting of 42gram and above cartridges a far more comfortable affair, opening up the shooter’s and the gun’s hunting potential.

Nicely grained and finished with a semi-matte lacquer, the woodwork is definitely a higher grade and quality than the gun’s name would indicate. The stock exhibits just the right amount of thickness and cast whilst the grip should suit most hands, the fact that there’s no swell and its fully ambidextrous meaning no matter what hand you shoot with, the gun remains fully fluid. Similarly the Schnabel forend is well contoured, filling the hand yet still promotes fast controlled movement. If I had to criticise the furniture it’s the checkering.  Neat and well located, it’s just a fraction sharp.

The Game One’s action is the familiar B525 design, the deep steel chassis housing the well-known inertia lockwork. Where it now differs is in the profuse decoration, a single pheasant and mallard now surrounded by dense rose and scroll that extends around the base of the action and upwards onto the top-tang, top-lever and forend irons. Conversely, the gold plated trigger sits within a plain satin finished ovoid guard embossed with a Browning Buckmark picked out in gold.

The barrels are a rich gloss black and complete with a 5mm low vented game rib, these back or over bored tubes, 30” in this instance, feed into the 3” chambered monobloc that also house the strong, equally timed ejectors. Dropping neatly onto the action’s trunions, like the guns that went before, the Game One still uses the locking system that’s been a hallmark of these guns for years. Extending from the base of the action face, as the Game One is closed, a solid bar extends, locating into the slot situated just below the bottom chamber, this simple design is one that shooters have justifiably had faith in for years.

As a matter of course I hooked the Game One up to the Arrow Laser Shot although there was little need, if only to confirm what I already knew even before the gun arrived. It shot flat, placed its muzzles exactly where I was looking whilst there wasn’t the slightest hint that I’d have to modify my mount. Similarly, weight and angles wise the Game One continues the B525’s tradition of a gun that fits 99% of shooters whilst the new recoil pad noticeably improves this B525’s ability to locate.

A gun that seems to balance and swing from the instant you pick it up, with ¼ and ½ chokes fitted and a selection of 28gram Eley VIP Sporting and Trap cartridges to hand, fifty sporting birds were a pleasure to shoot. Like all Brownings the Game One has a purposeful feel and air about it, moving where it needs to be when it needs to be there. Likewise, it just feels right like a Browning should, solid between the hands, steadfast against the shoulder and cheek creating a sensation that its there to do the job it was meant for and there to do it right.

Tighten up the chokes to ½ and ¾ and the gun’s ability to pick off tall driven birds is equally impressive. The simple act of tilting backwards setting the muzzles off in a controlled, measured arch as they first catch up then pull through to the desired amount of lead, all the while the shooter confident in the fact that the Invector Plus chokes will throw a uniform pattern.

If I was looking for a good, solid game gun that was equally adept at clay breaking the new Game One would have to be a serious contender. Granted there are similar 12-bores now available for considerably less but Browning’s B525 still has something reassuring about it. It feels right and looks right like your favourite shooting jacket or cap, the instant you pick up a B525 it feels like an old, faithful friend. You hit your targets from the get go, you rarely if ever have to ‘get used to it’, whilst if you take care of it, it’ll last a lifetime and then some.

Offered in six configurations, there are three barrel length options namely 28”, 30” and 32” along with both left and right-handed versions, from the customers’ point of view, especially the south-paw who usually has to pay a premium, they all cost the exact same £1,415. For myself, and its rare I go for the longer options, the 30” as tested would be my own preference. The length of the barrels combined with the general feel of this evolved Browning allow the shooter to switch easily between a fast handling walked-up shotgun and a measured driven bird 12-bore, the balance and physical make-up of the Game One simpatico with both styles.

Apart from my minor concern in respect of the checkering, a problem that vanishes if you wear gloves like I do, the new Game One also confirms something all honest shotgun shooters have known since the B525 and those that went before were introduced. Like its forebears as soon as you hold and mount this B525 it offers a good fit and hold straight out of the box, it comes up correctly, nine times out of ten is looking where you are, has no vices and looks good. So think logically; if the B525’s didn’t sell Browning would stop making them so doesn’t that tell you just how good they are? GM