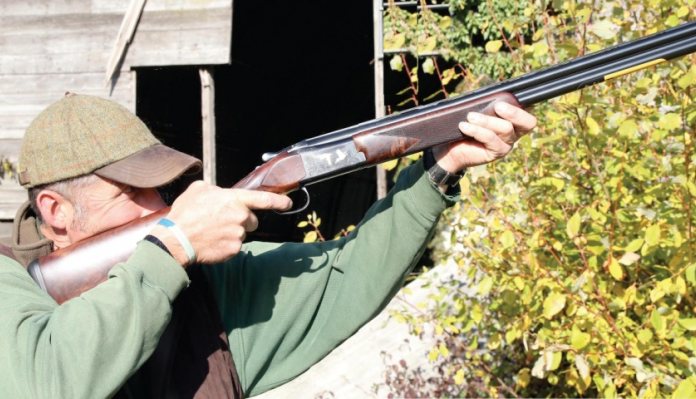 What feels like only last year but in reality, was several years ago, Browning introduced the 725 Hunter with the option of silver or black action; the Black was and is tastefully striking, so it was only natural for me to look at and review one in 20 bore, which I subsequently ended up keeping. When our esteemed editor decided to do the grownup thing, and have one of those old fangled, double barrelled, 12 bore shotguns instead of his more normal, large capacity semi or pump action, he turned to me for advice and I pointed him towards the 725. Some might say rather rashly, Pete has let me get my grubby fingers on the aforementioned gun to look at, no doubt he thinks he will get it back; fool!

Browning is a name in firearms manufacture that everybody has heard of, since John Moses Browning started producing them over a century ago. The name is a guarantee of a known level of quality, no matter where they are made, in the case of this 12 bore it is Japan, although my 20 came from the factory in Belgium. The Black edition 725 is, at first and all subsequent glances, a subtly noticeable shotgun, the wood is fairly dark but with good grain and this is combined with a blacked action that has a combination of scroll engraving along with game scenes where the pheasants and partridges are inlayed in gold and there is also a gold partridge head on the top lever.

Whilst this may sound rather blingy or garish, this is not at all the case, the gold on black has been done in a very tasteful way, which to be honest, even good pictures do not do justice to. The match of wood with stock and forend is excellent, certainly every bit as good as on shotguns that cost considerably more. There is a semi pistol or Prince of Wales type grip that is very comfortable in the hand, chequering is of the expected diamond cut and exactly right to provide a fi rm purchase without feeling too sharp and distracting the shooter. Length of pull is 14 ½” but this can easily be extended, as Browning offer spacer or extension pads, which can easily be added without needing a gunsmith to do the work. It’s a matter of undoing two screws, taking the butt pad off, putting the extension in situ, then screwing the butt pad back into position.

Over the whole of the test gun’s wood-tometal and metal-to-metal fit and finish is very good, as one would expect. Although having recently seen a shotgun of another breed that cost the better part of £5,000, where build, fit and finish was shockingly poor at best, one cannot assume anything!

The test gun weighs in at 7 5/8 lbs, it is well balanced and does allow the user to point naturally at the intended target, barrel length is 30” and as with my 20 bore, they do not seem that long in use. Browning do seem to have got everything spot on with these 725s, creating great overall balance with the combination of the 30” barrels, action and wood weights. The rib is vented and finished with a diamond cut pattern and has the traditional brass bead at the muzzle. For me, the comb is a little low and I did have to make sure I did not push my head down too much in order to still see the top edge of the rib. The non-automatic safety is on the tang, so does not return to safe when the gun is opened. It’s also the barrel selector, allowing the shooter to fire top or bottom first, by pushing it left or right. Again, this is all standard stuff on pretty much any over and under. The trigger pull is crisp, with no creep and each shot broke consistently when shooting.

As one would expect, this is a multichoke and comes with a set of five Invector, flush-fit tubes from Cylinder to Full, with all except Full rated for steel shot. Chamber length is 3”; so, for those of you shooting duck or geese, using the appropriate cartridges, will not be a problem. The 725 also comes with a hard-plastic, lockable, travel case that it fits into when taken down.

I used a variety of cartridges in loads from 21 to 36 grams and unsurprisingly all worked well, with no issues in either firing or ejection, which were thrown clear, even the longer 3” cases. Obviously, with the lighter loads, recoil was virtually unnoticeable, but even the heavies were quite pleasant to fire, although I would not want to shoot a lot of them all day long.

The Browning was a joy to use, with the balance being excellent, shooting was fairly effortless, and it also inspired confidence in one’s ability. As I said earlier, the gun is very pointable and this really came out in the shooting, acquiring the target or rather quarry being shot at felt very natural, with no undue effort required. Cutting the line of flight on crossing and quartering birds or pulling through straight on ones just seemed to happen and, even better, I managed to connect with the bulk of the quarry I shot at on the whole with the first shot.

Mostly, it was just the odd bit of vermin when doing the rounds on my shoot, I did have a brief spell flighting pigeon one afternoon. I got to the wood too late; even so, 5-shots later in a 20 mph wind a pigeon and two crows were accounted for.