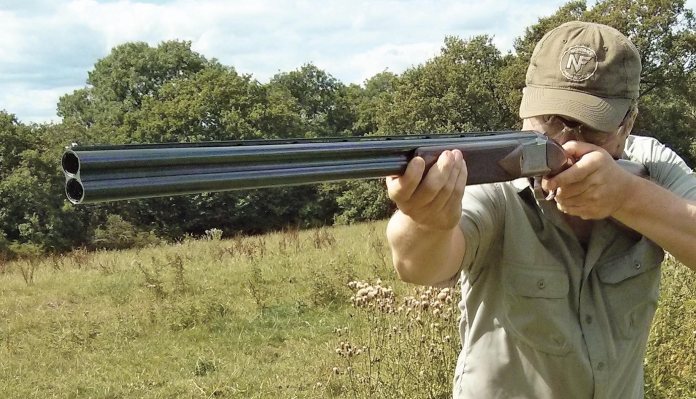 Having been thoroughly impressed with the original 12g B725, in both its standard and UK Hunter variants, I was mustard-keen to try the new 20g version, launched this year, especially as it too was being offered in a version with ‘English’ styling (which in this case means a rounded pistol grip and forend). We also get the option of 32 inch barrels in addition to the standard 28 and 30 inch offerings, so this was the model I requested for test.
The gun comes in a grey ABS case, whose curved shape may or may not be easier to fit in a car boot, but means it can’t be stood on its end without falling over. Inside, however, it cradles the gun well and also provides storage for a trigger lock and a matching choke box containing a choke key and five of Browning’s excellent DS Invector choke tubes (Cyl, ¼, ½, ¾, Full).

These are 80 metres long, flush fitting, made from a special lightweight stainless steel, and have the thread at the muzzle end, minimising the flared look to the barrels associated with other interchangeable choke systems. They also have a sophisticated internal profile designed to produce consistently even patterns and phosphor-bronze compression rings around the other end that prevent gasses leaking between the choke tube and the barrel, thereby minimising fouling and making the DS chokes uniquely easy to clean.

But let’s not get distracted by the chokes, as first impressions are naturally dominated by the gun itself. The wood is American walnut, straight grained and tidily checkered, if more interesting for its colour – reminiscent of mahogany – than its figure, though the test gun did show some transverse striping. The barrels are well struck off and finished in an even and lustrous black. Finally, the action has a satin-matte silver-grey finish with a streamlined top lever and fences, smoothly radiused corners, and the same lowprofile design as the 12g. The trigger guard is a good size too – accommodating a gloved finger without being oversized- and frames a smart gold-anodised trigger.

I’m in two minds about the overall decorative scheme, however, which, as on the 12g, is a rather eclectic mix of traditional game scenes (not bad), radiating lines (odd) and stylised artnouveau motifs (unusual and rather nice). As you can tell, I wish they’d stuck with the latter (which adorn the forend steel, the top lever, and the underside of the action); but, again as with the 12g, it seems likely that a Grade 5 model is on the cards, which should take care of any aesthetic qualms, albeit at a price. Nevertheless, the execution of the rolled and laser-etched decoration is flawless, and the scheme is neatly completed by a small gold Buckmark logo on the trigger guard and the legend B725 Hunter G1 on the bottom of the action.

When you shoulder the gun, of course, you don’t see the decoration, only the flattened silver bead at the end of that long, diamond-cut, 6mm top rib. And even this view is less important than the feel of the gun, which instantly impresses by its poised combination of dexterity and steadiness. Light and quick as a 20g should be, it also swings smooth and true, and somehow prompts an unusually precise mind-set in the shooter, making you feel that every shot will be perfectly centred on the target.

Despite being left-handed, I had no problems with the R/H test gun (a L/H version is also available), as the cast is minimal (barely measurable at the heel and fractionally more at the toe), and the stock dimensions (14¾ inches/375mm length-of pull, and 1 3/8 inches/36mm and 2 3/16 inches/56mm of drop at the comb and heel respectively) suited me well. The butt is finished with Browning’s effective Inflex II recoil pad. The standard pad is 20mm thick, but other sizes are available, making it easy to adjust the length-of-pull if required.

At the heart of the B725 is its distinctive low-profile action, perfectly scaled down here to match the smaller bore. In addition to being unusually elegant, it offers several mechanical advantages, the low centre of gravity helping to reduce muzzle flip, whilst light tumblers with a short arc produce very fast lock times.
The reduced depth of the B725 action is achieved by making the diameter of the hinge pin a little smaller and the barrel lumps a little shallower, whilst its strength is retained by making the hook on the front lump wider and keeping the classic Browning arrangement whereby both lumps engage through the floor of the action.
The single selective trigger mechanism is mechanical and thus unaffected by the variations in recoil between the lightest and heaviest 20g loads available (21-32g). Trigger pulls were a consistent and most agreeable 4lb. The gun’s weight is ideal too, at just 3kg (6.6lb), despite its steel action and 32 inch barrels.

Barrel selection is via the safety button. This is manual in operation, but a connector is included with the gun to allow it to be converted by a gunsmith to reset automatically. On a game gun like this I think Browning should fit an auto safety as standard, however.

To select a barrel the whole button is slid to the left (O) or the right (U) before being pushed forward to fire. Nevertheless, diagonal pressure from the thumb can result in the button catching in the middle. You soon learn to avoid this, but it’s worth doing so before taking the gun out for a day’s game shooting!

One other quibble I have about the 20g B725 is that, unlike the 12g, the rounded forend has not been designed especially for the gun, and is simply the standard part with the schnabel turned off (the sight tulip curve of the underside has been left unchanged). You still get the full schnabel-free run of the forend, of course, but this, literal, ‘short-cut’ may disappoint those who prefer a more classic ‘London’ shape. On the other hand, the 12g version lacked a rounded pistol-grip, a point that has been addressed on the 20g.

The most essential property of any gun, however, is that it shoots well. This is down to shooter comfort (already taken care of by gun fit and the Inflex pad), to the weight distribution across the gun from the muzzles to the butt (giving the B725 20g both its agility and its steadiness), and to the internal profile of the bore and chokes.
In the latter case, the B25 shows Browning’s proven Back-bored Vector Pro design with an oversize 15.9mm bore (15.6 is standard) and an extended forcing cone ahead of the three inch/76mm chambers. By allowing plenty of space for the crimp to open up, and leaving the shot relatively uncompressed until it reaches the chokes, pressure spikes and shot deformation are minimised, which Browning (plausibly) claim results in smoother recoil, higher average velocities and truer patterns. The barrels are also chrome lined and proved for high-performance (1370 bar) steel shot cartridges.

I didn’t have a suitable gun by another maker available for comparison, but the B725 20g threw nice even patterns in its own right with a selection of cartridges including Lyalvale 21g Special 20, Hull Cartridge 28g Sterling Game, Eley 25g Grand Prix and 32g V.I.P., and Rottweil 26g Special 20. Most shooting was done with the mid-weight Grand Prix and Rottweil loads, which were both mild-shooting and killed very well indeed.

Unfortunately the test gun had to go back before I could use it on partridges or pheasants, so field trials were limited to flight-lining pigeons, thinning out a plague of wily jackdaws, and decoying crafty crows, all of which it tackled very well indeed. In fact, i expect I’ll remember some of those high jackdaws with satisfaction for many years to come.

The B725 20g is a really shootable gun that won’t disappoint in the field. I could quibble (and have done so) about its decoration and its safety button, but otherwise its design and execution are beyond reproach, especially at the price. And let’s put that into context. Before the B725 UK Hunter was launched, if you wanted a 20g O/U game gun with 32 inch barrels (the ideal length for a gun of this type in this calibre, in my opinion), you were faced with a choice between something considerably more expensive (Rizzini) and something considerably more basic (Lincoln). Browning’s new baby, however, delivers all the performance of the former –if not more – with much greater elegance and sophistication than the latter, and at a price that slots neatly between them. Did I say there was a choice?